Black Phoebe: Range Expansion, or Taking Advantage of a Situation 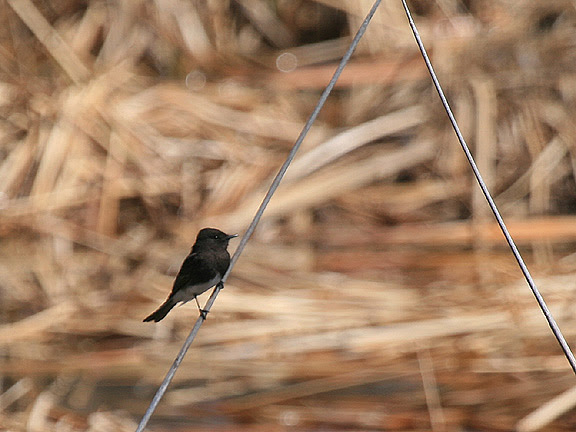 For the past four years I have been working in, and goofing around in Natural Bridges National Monument. It's one of the most beautiful places in Utah, and I believe that it's a very underrated location in our national parks system. In the four years of working in Natural Bridges, I've documented Black Phoebes in two seperate years. In 2009, I had one individual. In the years 2010 and 2011 I saw/heard no Black Phoebes. This year, I had 10 seperate individuals (possibly more. I couldn't tell if some singing birds were the same birds I flushed, or different birds)! Some of those birds even seemed to be setting up territory, and two were carrying nesting material. I was blown away by the number of Black Phoebes I counted in the park this year, and I started to wonder why the numbers went from one, to zero, to zero, to ten. I've heard of Black Phoebes expanding their range in the Western United States, and I've heard of them moving northward along the Colorado River, but that much of an increase just doesn't make sense to me. While working, I noticed that the water in Natural Bridges seemed unusually high, and I had to skirt around pools that normally weren't there. As I was doing so, I wondered if this could be the reason that Black Phoebe numbers were unusually high in Natural Bridges this year. Is this a natural expansion of their range, or are they taking advantage of the better than normal habitat situation? It would be interesting to follow over the years. If I had a way of measuring water levels, and comparing them with Black Phoebe numbers in Natural Bridges, maybe I'd have myself a hypothesis. For now, I only know that this year there were 10 times more Black Phoebes in Natural Bridges than I've ever counted.

@Carl: I have seen Black Phoebes in a few locations in San Juan County--but just ones or twos, and that's like 1 here, a pair somewhere else, and another one 150 miles away. I think your observation could be pretty telling of something in relation to the water year we had last year. If next summer the water is back to where it has been in the past and the number of phoebes diminishes it would seem like there was a correlation between the two. Will be interesting to see if you have similar experiences at other locations. Thanks for sharing--I'm looking forward to more of your reports form the field!

For many years now I have observed a few (2-4) black phoebe in Desolation Canyon while on survey efforts. The phoebe are always in the same portion of the canyon (between Big Canyon and Rain Canyon). In fact, every year I float the canyon, there is a pair on the same cliff face. This is a particularly pock-marked cliff face right over the water. Unfortunately I have not been able to stop and search for a nest because the area is directly above a rapid. I believe the first time I saw the black phoebe in this area was in 2002 and they are been there every time I float.

Thanks for great information you write it very clean. I am very lucky to get this tips from you.