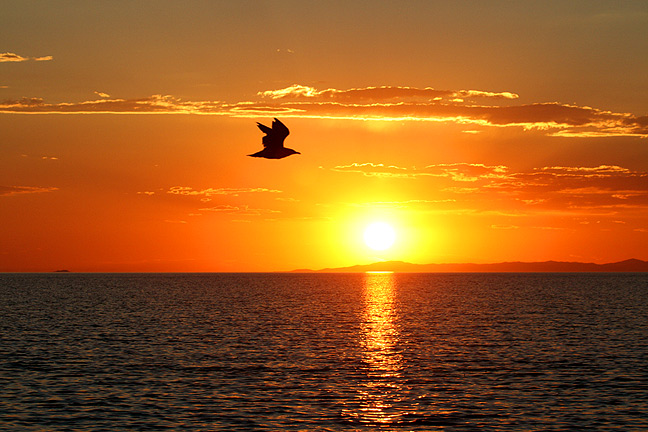 Sunset from the Causeway, where a new 200 yard
hunting buffer was approved by the state today.

The 2012-2013 Waterfowl Guidebook recommendations, which included the 200 yard buffer along Antelope Island, were passed unanimously this morning.

I guess we can all celebrate now, and what better way to do so than taking a trip to the Antelope Island causeway.  I'll be leading a field trip with the Great Salt Lake Audubon to the causeway this Sunday; talk about good timing.  More details about the field trip can be found here.

When I visited Costa Rica in 2011 I had learned very few of the bird songs and calls of the 800+ species found there.  Nothing was more frustrating than standing in thick forest and hearing squeaks and whistles of birds I couldn't see.  For the first time in a long time I was hearing noises I couldn't identify.  I was able to records a handful of songs that I later ID'd using Xeno Canto to compare to songs in their database, but for each bird I figured out there were probably 5 that I never did.  Xeno Canto is a collection of bird songs from around the world, stored in an online database accessible to everyone.  It operates under the creative commons non-commercial 2.5 generic attribution, allowing for free sharing, copying, distributing, and transmitting for non-commercial purposes.  For finding, listening to, and learning bird songs this is the one stop shop that is the golden standard .

Before Costa Rica I had listened to numerous songs on the site, but for some reason it never dawned on me to make a playlist from the library to take with me.   The songs and calls at Xeno Canto can be downloaded, set into playlists, and loaded on your iPod like any other music.  I had created numerous playlists over the years from my Peterson CDs--often creating habitat specific playlists for learning birds quickly and easily.  Today I look back to Costa Rica and think how nice it would have been to have had my iPod readily available to listen or even playback when I wasn't sure.  For Peru there was no question that I would need to build playlists.  I had read on more than one blog that in the Amazon you will see about 1/3 the number of birds you can hear.  So being able to identify some birds by song, or bring some birds in by tape would be a necessary evil.
I started downloading songs and calls nearly 4 months ago, and only wrapped things up this past weekend.  In all I downloaded some 800 species worth of "bird music".  This was surprisingly less than a gigabyte of space on my iPod, and separated out into playlists by family groups, or groupings of closely related families.  I tried to find the best recording for many species, sticking with songs for certain species, while only downloading calls of other birds.  I prefer calls because they can be used year round and make sense--where songs are used specifically for breeding birds.  Where there was no option--or few options, I just went with what was available.  For some species only 2 or 3 recordings were available--and often those were not great.
Wading through the1000's of available recordings the majority were in fact of poor quality--but none-the-less I found certain recordists whose quality and quantity of recordings made me go back to them time and time again.  Andrew Spencer from our neighboring Colorado had perhaps the best recordings for Peru and other South American countries--I would guess that no less than 1/2 of the songs downloaded were recorded by him (I believe he is one of the top contributors to the site as well).  Jeremy Minns, Tayler Brooks, and a few others also had great recordings that I relied on when available.
In the end there was no real learning of songs or calls--it is just to much for me to take in.  Listening to the songs of 30 different woodcreepers who really all sound very similar, or Tit-Spinetails that seemingly differ by just a note here and there are almost frustrating.  The calls of dozens of tanager and finches that are just seeps and clicks make me wonder if the tapes will be helpful in the end.  I have a feeling I will resort to them nto necessarily to try an ID something I hear--but to try and call in something I know is in a certain area.

Here in the states Xeno Canto is a great tool for learning birds in areas you plan on traveling to, or for building custom playlists for those areas.  It's a hassle to flip through 800 songs when you may only need 10 or so for a specific region--building that custom list could take less than 30 minutes, and while you are building it, you can be learning the songs and calls by listening to them on the site.  I know that in the future Xeno Canto is going to be my go to resource for building playlists--I guess Peru will be a a test run to see how it works out!

The RAC meeting this evening went very well, and I didn't have to do that much speaking.

Brittany Badger, Shyloh Robinson and I arrived at 6 PM.  When we got there, we found that Kris Purdy and Paul Higgins were already there waiting for the meeting to start (Thanks for coming, everyone!).  I filled out a comment card, we did some minor catching up with Kris and Paul, and we patiently waited for the meeting to begin.

The Antelope Island Buffer was discussed when the RAC discussed the new 2012/2013 waterfowl guidebook.  Our proposal for a no-shooting buffer was a new rule that was introduced into the new guidebook.  After the changes to the guidebook were introduced, the RAC asked for public comment concerning the issue.  I stood up to the microphone and stated that the Utah Birders were in support of the new guidelines proposed, and most notably we agreed with the 600 foot buffer proposed along the Antelope Island Causeway.

After the guidelines were introduced, and comments were made by the public and by the RAC, and the issue was then voted on by the RAC; they voted unanimously to approve the guidelines, which included our proposed 200 yard buffer along the causeway.  Members of the RAC were then asked to comment on the vote, and one member stated that he was very happy that hunters and birders worked together to solve a complex issue concerning both parties.

I am still in shock.  I'm overjoyed that we worked together to come to a compromise that will work out for all parties concerned.  I'm happy with the help and support I received from the birding community, and the hunting community as well.  This really wouldn't have been accomplished without teamwork and compromise.

It's a humbling experience to feel like you've made a difference in the world, and that you've done something positive for conservation.  This has been a great learning experience and I'm glad that I had the chance to experience it.

I forgot to thank many of those that have worked with me.  In addition to those I thanked on the previous post, I'd like to thank:  Jeff Richards and the Utah Waterfowl association, the Utah Airboat Association, Jay Banta and the Backcountry Hunters and Anglers, Kris Purdy, Paul Higgins, Don Paul, and another HUGE thank you to Jeff Gordon and the American Birding Association.

posted by CarlIngwell at 3:28 PM

Tonight the DWR's RAC will be voting on rules to be added to the 2012/13 Waterfowl Guidebook. One of those rules is a rule that we proposed last December, which would place a 200 yard no-shooting buffer along the Antelope Island Causeway. 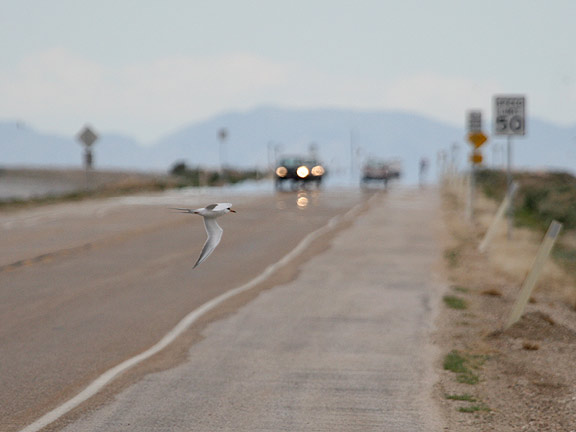 Forster's Tern flying over the Cuaseway.

I will be in attendence at the RAC meeting, and also at the Utah Wildlife Board meeting next Thursday discussing this rule, and why we are in support of it. I'm a little nervous. I know that there is a great amount of support for this proposed rule, and hunters seem to be mostly on board, but I can't say how the vote will go. I hope that the buffer rule will be enforced along the causeway to preserve the integrity of one of Utah's most beautiful state parks, and to protect the wintering waterfowl that so desperately need the causeway for their survival.

I'll keep everyone posted on how the vote goes. No matter what happens tonight, I'd like to thank Jeff Gordon of the ABA, Corey and Jessica Stokes, Jeff Bilsky, Tim Avery, Shyloh Robinson, and Kenn Kaufmann, and all the Utah Birders for all the help they gave me along the way. I couldn't have done this without your help and support.

Here is a link to the blog post from last December that states why we feel that this is a concern.