Today we are excited to announce the new section to the Utah Birders website--BIRDING SPOTS!

Currently if you login to eBird to submit data, there are more than 1,300 hot spots listed for Utah.  The vast majority of those spots are unknown to most birders, and some rarely get birded.  The goal of our new SPOTS pages is to create an informational page to go along with every hot spot--YES, every single hot spot.  And that's no easy undertaking.  Currently there is nowhere on the web to find information about the majority of these locations.  The truth is we don't have the time, or knowledge of all the locations to be able to do this project alone--so we are asking for your help.  We want to build this database of locations to match eBird, and we want to do it as a community.  You know many of these hot spots better than anyone else out there, and we want this to be a community to help share this knowledge with others out there.  If everyone on UBIRD were to write up 4 locations, we would have the locations database done in a week.

But we know that not everyone has knowledge of every corner of the state, so what we are asking is if you want to--respond to utah.birders@gmail.com and volunteer to be part of the locations community.  We will give you access to blogger where we are building the database, and provide you with a template, and instructions on how to build out locations.  Then you are free to add any that haven't been created to the database.  What we really want is people to take care of the areas they know better than anyone else--the local spots that you bird often--the out of the way places you go, and anything that hasn't been added yet.  So if you bird Weber County or Sevier County a lot and know those places we want you to be the one making the pages for the hot spots in those counties.

We got things started and have almost 80 locations finished already.  It's a good start, but we want this thing to be comprehensive. If you don't want to actually add the locations into the system yourself, you can also use our submission form to submit locations information, and we'll add it to the database with a big thanks to you for your help.

And that's it!  Let's see how many birding spots we can add to this community database.  It will be a great resource for birders, and compliment eBird nicely!

Or perhaps 10 species of birds I didn't know existed...

On this tiny planet spinning around in our enormous galaxy there are around 10,000 species of birds.  Most readers of this blog are familiar with the 400-500 species of birds in Utah, and perhaps the 700 or so found in the western United States.  Many probably have a pretty good understanding of the 900 or so birds of the United States as well.  From there most American birders head south to Central then South America for the expanding of their ornithological knowledge.  Let's face it, most of us have a pretty narrow view of the birds of the world.  It's only been the last 4 years that my personal views of world birding have opened up.  It's enlightening.

Prior to 2011 I didn't know the Speckled Tanager existed--now its my favorite new world species.

Before 2011 I had never been birding outside of the lower 48 states.  In 17 years of birding I had just over 550 species on my life list--in the last 3 I've seen well over 1,000 species, adding almost 900 new birds to my life list.  The worlds a pretty big place despite our insignificance in the big picture, and when you go birding outside of North America new birds come quickly--and some of them will change your view of birds forever.

What exactly is a White-winged Diuca-Finch? Pictured above you'll only find this bird high in the Andes.

The first time you hear about or read about a bird you never knew existed you might think, okay that's pretty cool, and then move one.  If you are reading about it because you might be going to an area where you might see it, then things get serious.  In my case I often think about those birds and how amazing of an experience it will be to finally see one--maybe.  Then comes the day when you are out there in the field and you actually lay eyes on it.  In my case I get filled with joy, and for a second think about nothing else in the world but that bird. It's a rush. 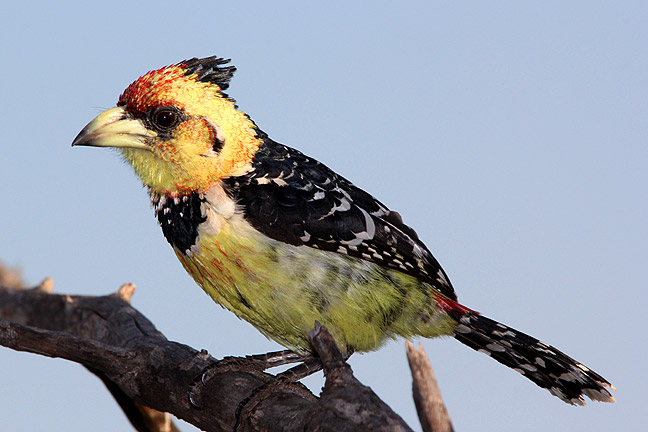 When I learned about the Crested Barbet, I had a new favorite bird in the world.

Whether or not you actually have heard of any of the birds I'm about to talk about, I think you'll appreciate this list.  Most of these species were only named or discovered in the past 20 years--some are very rare--some are split form other species--some are in remote locations--but all 10 are birds that before I wrote this, I didn't know existed.

The Rubeho Akalat is an endangered member of the Old World flycatcher family from the Tanzania.First discovered in 1989 it was  assumed to be an isolated population of Iringa Akalat, but further research in 2000 led to the bird being described as a new species. It's English name relates to where it is found, Rubeho, Morogoro; the scientific name to the ochre color on its throat and breast.


Described officially to science in 2004

The Antioquia Brush Finch is a poorly known and critically endangered species first described in 2007 from three museum specimens from Antioquia, Colombia, that had been mislabeled as other species.  All three museum skins were collected in the 1900's, but only one label had a date from 1971. Since 2007 fieldwork  in Antioquia has failed to find this species again, and it is now believed to be extinct.

The Sierra Madre Ground Warbler was discovered on Luzon Island in the Philippines where it inhabits dense forest understory. A ground-walking songbird, they have strong legs and weak wings and it appears that they can barely fly. Their song is extremely high in pitch and it's almost impossible to locate the source of the sound in the forest--often sounding far away even when they are almost at your feet. The Grey-crested Cacholote is a species of bird in the Furnariidae family. It is sometimes called the Rufous Cacholote, which is confusing, as this name was used for the parent species before the Gray-chested was split. It is mainly found in semi-open habitats in the Pantanal-region in Brazil, Paraguay and Bolivia.

Described officially to science in 2000 The Nonggang Babbler was discovered in Nonggang Natural Reserve in the Guangxi, China, the only location it is known to exist at this time, in February 2005. A specimen was taken the following year, and it was formally described as a species in 2008. It prefers running to flying, and seems to spend most of its time on the ground foraging for insects between rocks and under fallen leaves.

Described officially to science in 2008

The Solomons Frogmouth, a.k.a. the Cinnamon Frogmouth or Solomon Islands Frogmouth, the only known member of the genus Rigidipenna, was first described in 1901, but not recognized as its own species until 2007. It is endemic to the islands of Isabel, Bougainville and Guadalcanal in the Solomon Islands. Despite their being other frogmouth species, Solomons, differs with only 8 tail feathers instead of the typical 10 or 12; it has coarser feathers, barred primary and tail feathers, as well as white spots and large speckles.

The Chestnut-eared Laughingthrush is a species of bird in the Leiothrichidae family found in tropical moist montane forests of Vietnam and perhaps Laos.  It is threatened due to habitat loss.

Described officially to science in 2001

The Cambodian Tailorbird was discovered in Phnom Penh, the capital of Cambodia in 2009 during bird-flu checks. In 2013 it was formally described as a new species--it is endemic to Cambodia, and likely confined to a dense shrub forest in the Mekong River floodplain. This very small bird is just under 4" in length, and sports an orange-red crest. The Sira Barbet is found in the eastern Andes in the Ucayali Department, Peru, and was discovered in 2008. It is genetically isolated due to the geography of its home range along a ridge of montane cloud forest in the Cerros del Sira. DNA sequencing was also used to confirm the Sira Barbet's status as a distinct species
Its scientific name comes from John W. Fitzpatrick, director of the Cornell Lab of Ornithology.

Described officially to science in 2012 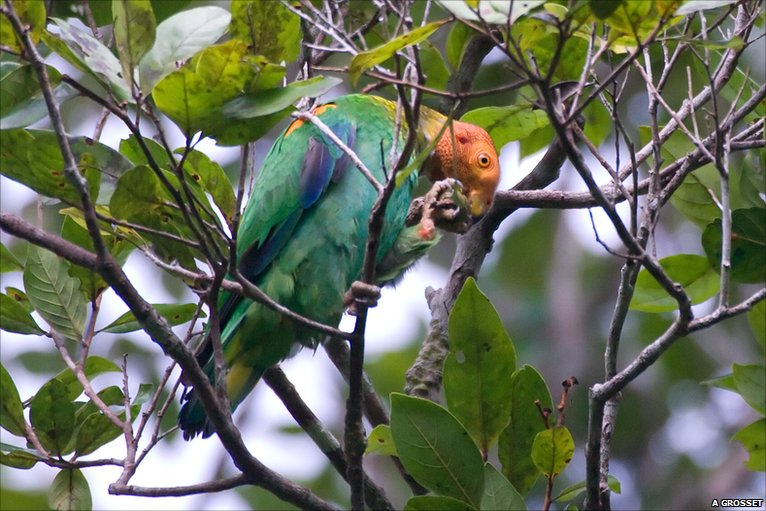 The monotypic Bald Parrot or Orange-headed Parrot is a species of parrot in the family Psittacidae, endemic to the east-central Amazon of Brazil.  It is found in tropical moist lowland forests and is considered near threatened due to the widespread deforestation of the Amazon. When discovered, it was initially believed to be a juvenile of the Vulturine Parrot due to the orange color of its bald head as opposed to the black of the Vulturine. However, the individuals discovered were sexually mature, and therefore were described as a new species. In reality, juveniles of both species have feathered, greenish heads quite unlike those of the adults.

Described officially to science in 2002

Are there any species of birds you recently learned about that you never knew existed?  Share your findings in the comments section below!

----------
All species information extracted from Wikipedia.com