It seems like just yesterday we were wrapping up the 2014 Gullstravaganza. The crazy thing is that was 13 months ago.  2014 was one of our best gulling events--the best up till that point in variety of gulls and number of participants.  This year we decided to put all our eggs in one basket and finally just move the event to Farmington Bay WMA for its entirety instead of moving form location to location,  This likely had some advantages and disadvantages, but it made for a more relaxed event and much easier planning.

As has become the norm, we had a good number of sign ups with 33 people signing up for the event, despite a competing field trip led by Jerry Liguori and Hawkwatch International... Queue a little Seinfeld humor... "Hello Jerry!!!"

Okay, so that was ridiculous... :) In the past we have tried to plan this even when nothing else is going on, but this year we knew there were conflicts ahead of time--luckily the one we expected to cut in to ours--Snow Goose Festival--was actually a week later than expected (good for us and likely very bad for them as the geese have already started moving on...eek.).

So anyways, to the event.  After a slow start with gullers arriving we quickly realized Jerry was trying to poach our trip attendees by having his trip block the road to look at some boring BALD EAGLES.  He even went so far as to "accidentally take" one of our gullers in his car until the chap realized he'd been duped into the wrong group.  We straightened things out and eventually 23 birders were rallied to head out for the gulls! 4 more joined us shortly after for a total of 27 attendees this year.  Down from what we expected but the weather report likely caused some last minute dropouts--and those who Jerry promised photo-ops with ;)  None-the-less we were here to gull and gull we did.

Heading into the marsh we stopped briefly to look at an adult LESSER BLACK-BACKED GULL that was hanging out at the air boat launch on Dike Road at the carp pile.  Due the the unseasonably warm weather we've had the eagles have mostly moved out, leaving the piles of fish for the gulls to take advantage of without any competition. 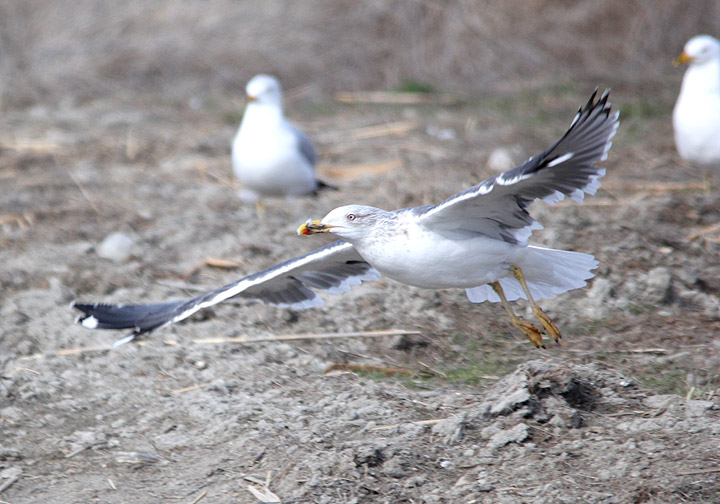 We scanned the water to the east as well where around 1250 TUNDRA SWANS were on the water, and hundreds of ducks including a few CANVASBACK were present.  Most of the winter divers were all together gone with just a few BUFFLEHEAD and COMMON GOLDENENEYE in the mix. To the end of the road we wandered setting up shop to scan a flock sitting on the mud a couple hundred yards out.  The prize in this group was a gorgeously white GLAUCOUS GULL that stood right out amongst the other gulls. 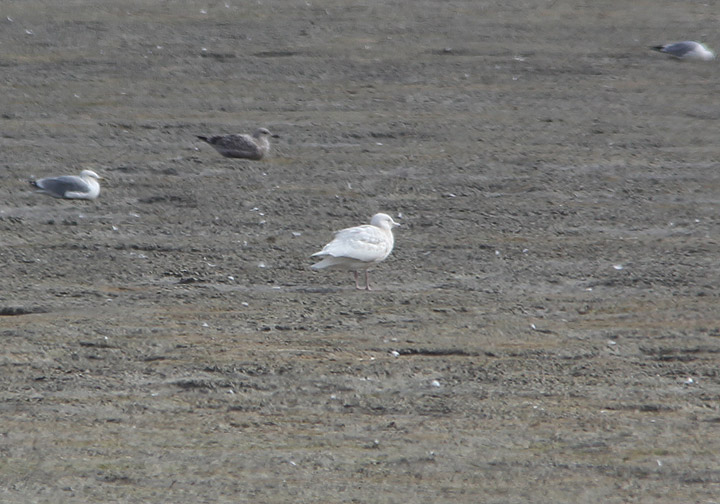 As we watched and tallied more LESSER BLACK-BACKED GULLS, a couple THAYER'S GULLS, and numerous HERRING GULLS things were looking good.  Along with just a couple CALIFORNIA GULLS and plenty of RING-BILLED GULLS we had 6 species of gulls in 30 minutes.  That's how to start a Gullstravaganza!  As we were about to pack up and head to another spot to set up for a bit, a very pale gull flew i and landed. I caught it running across the flats before it sat down and immediately ran for my scope.  This had to be an ICELAND GULL! 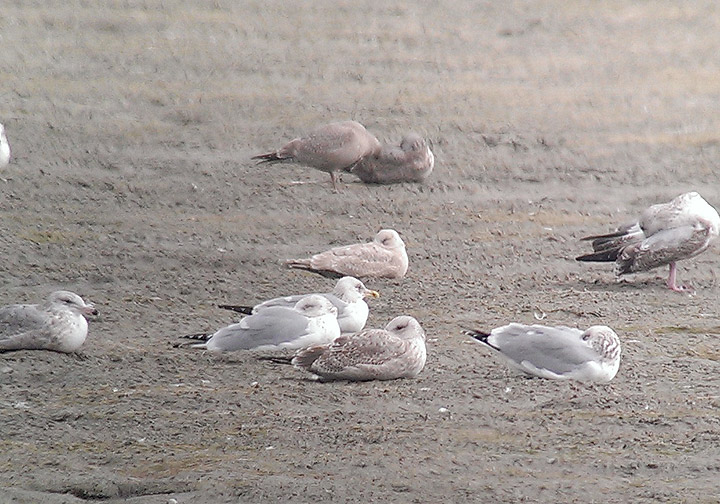 After a few minutes trying to get a good look at the wing tips I was 99% certain it was a Kumlien's Gull.  The bird had sat down and quickly tucked its head but it was sitting next to several Herring Gulls with a Thayer's nearby for comparison.  I assumed this had been the same bird Kenny Frisch and I found a month ago and it gave everyone long looks as it sat there until we moved on.  Everyone's scopes were trained on the bird--gull species #7 for the day in less than an hour.  The bird was a lifer for a handful of attendees--as was the Glaucous Gull. 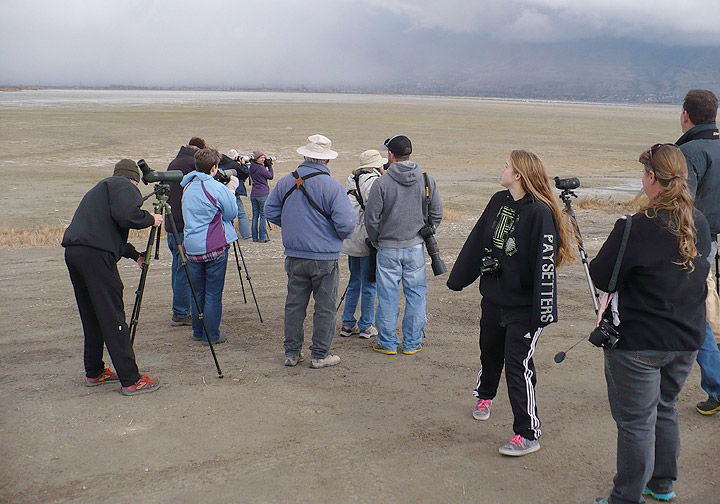 About this time a squall was making its way across the lake and had ht Farmington.  The wind picked up out of the north and headed towards us, bring wind, rain, and finally snow. We convened the vehicles in the parking lot on the west side of the 4-way where I told the group it was up to them whether they stayed or left.  I didn't know what the weather was going to do, but it didn't look pretty.  What I did know is we were here to look at gulls and not going to leave quite yet.  About 10-15 birders stayed or birded around Farmington for the next hour.  We set up about 60' from the carp  pile where HERRING GULLS were starting to filter in. 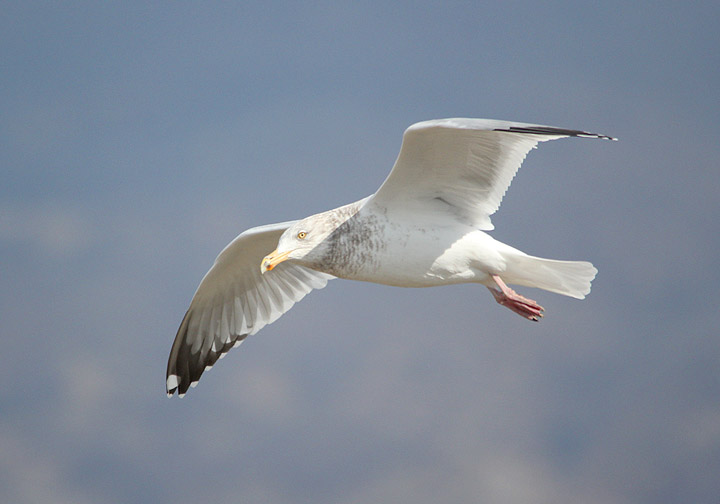 The light was fantastic as the sun kept mostly out even though it was bitterly cold.  The snow passed quickly and the birds didn't seem to mind our presence as they fed.  More birds joined the fray and eventually a couple 1st winter THAYER'S GULLS made an appearance allowing for some great up close study.

One of the biggest surprises for the day was actually the lack of gull abundance.  In fact on the day I counted just 23 CALIFORNIA GULLS.  That is an astonishingly low count for the event, and even for Farmington Bay this time of year.  The few that were present did provide some great opportunities to study next to the massive Herring's.

The other surprise was that by my count the Herring Gulls actually outnumbered all other gulls combined--that includes RING-BILLED GULL which typically follows California in numbers.  Herring Gulls outnumbered the others 280 to 259.  Those numbers are also a low count for the event in terms of total gulls.  Now there were several hundred (maybe even 1,000) over the dump a couple miles east that you could see swirling with binoculars.  But I didn't count them for the list since they were unidentifiable, and outside Farmington's boundary.

As the day wore on the group dwindled to about 10 die hard gull watchers, braving the cold, snapping photos, and talking gulls, cameras, and other things bird and birding related. This was a Utah Birders event to a tee!

We did have a bit of excitement i the afternoon watching the carp pile as a very pale gull came flying in from the east.  Initially I thought it was the Iceland Gull and was stoked I would be getting killer flight shots.  And killer shots I did get--only the bird wasn't the Iceland Gull! 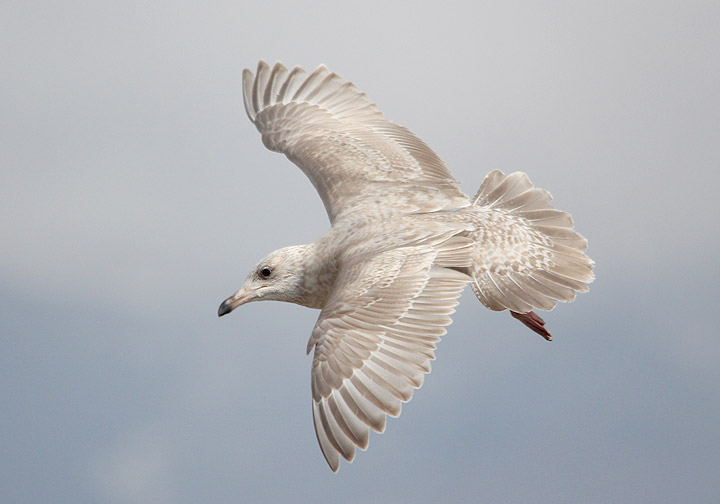 So what is it?

After it landed it was apparent the primaries were too dark and the bird seemed odd.  I thought about Thayer's Gull, but it was very pale, and was a hefty looking bird with a bulkier than normal bill.  Hybrids came to mind with the obvious choice for a bird this pale with a bi-colored bill being a Glaucous x Herring Gull hybrid--also known as a Nelson's Gull. 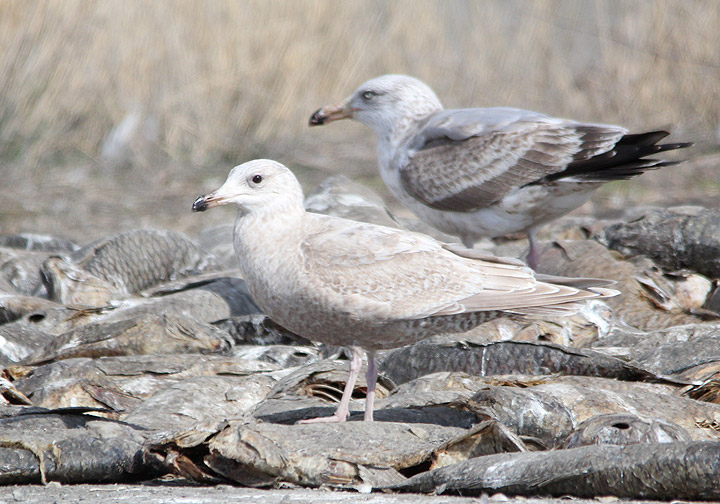 Certainly has a Herring-ish face...

I stuck to that as the name until I got home when I started to wonder if I was looking at this thing all wrong.  One of the major issues with late season gulling is that birds get bleached losing some of their color making them appear "whiter" than usual.  The bird was on the small size for the hybrid in question, but not too small. Looking at it I could see some Herring features which is why I clung to the idea of a hybrid.  I have had several others look at it and the opinions are varied.  From very bleached out Thayer's Gull, to Something with some "Herring in it", to Glaucous-winged x Herring.  Glaucous x Herring has been ruled out but the jury is out on what this bird is.  I could certainly be swayed to Thayer's Gull, albeit the lightest I've ever seen--but I feel reservatons based off seeing it next to Thayer's and Herring in the field. Regardless, it was a very cool bird. 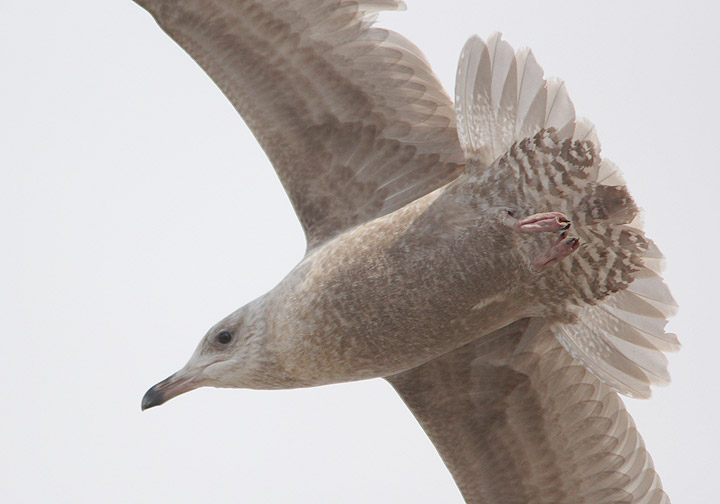 A gorgeous gull regardless the species!

Mid-way through the afternoon we wrapped things up and called it a day!  The 5th annual Gullstravaganza was in the books with 7 species of Gull!  As always this is my favorite trip of the year, as many birders still overlook gulls, and they continually provide us with unique individuals that can make for a difficult time ID'ing.  And as usual I was stoked with the excellent turn out.  As with years in the past my mind is already turning with ideas for making next years event even better.

A big thanks to Kenny Frisch for co-leading the trip this year.  And of course a big thanks to everyone who attended, from Salt Lake, Davis, Utah, Summit, and other surrounding counties.  There were attendees from Millard County as well as Wyoming; and even one guest from Scotland (although he currently lives here).

Great recap! Sounds like an awesome day of gulling... wish we could have been there.

Great recap! Sounds like an awesome day of gulling... wish we could have been there.

Way fun time, pretty cold but a great day!!! Thanks for the good times and the good gulls :)

If you by chance learn what the ID was on our mystery gull please let me know!
Thanks again for a great day!