Close Encounters of the Animal Kind

This past weekend was the first weekend I had free in months. My ultimate frisbee season (I'll blog soon enough about birding and ultimate frisbee) had ended in Corvallis, Oregon with a 3rd place finish in Northwest Regionals and suddenly I had a bunch of free time again for the first time since May to do things like write in this blog and to get out hiking and birding again. The first spot I wanted to go again was one that I haven't heard many reports from recently but was a favorite of mine since I moved out to Salt Lake City- Silver Lake and the adjacent trails in Big Cottonwood Canyon. This trip also doubled as my first ever hike in aspens in fall and even though the foliage was past peak, I was still enthralled with the beauty of them. 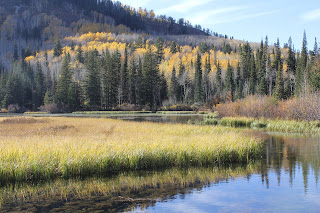 I quickly found out why there weren't many birding reports recently from the area- there were very few people up there! I basically had the whole area to myself and took advantage of the situation by taking my time to take in the scenery and to enjoy the birds and other animals I encountered. Unfortunately there weren't many birds up there, but because of the lack of people around they allowed close views and it was nice to see Mountain Chickadees, Red-breasted Nuthatches and Ruby-crowned Kinglets up close again. There were some raptors migrating through as well which is a benefit of this time of year as well.

I hiked up to Twin Lakes Reservoir and had the whole trail and lake to myself to take in the beautiful vistas. The hike up didn't have much in the way of animals but the hike down more than made up for it. On the way down, I spotted a herd of about 7 Mule Deer and wondered how close I could approach them. I snuck down the hillside until I was about twenty yards away from a doe and her two older fawns. They seemed to not care about my presence at all and I got to watch them as they ate. 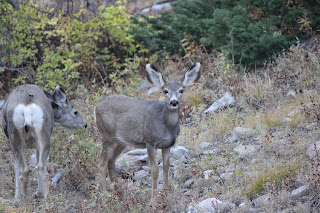 It was fun to get to view them just acting naturally with them feeding and occasionally having the youngsters romp around. Once the got far enough away from the trail I continued down. I eventually came to some scree slopes where I had heard some pika bleeting on the way up. I was determined to get a good view of these adorable lagomorphs since up until now I have only seen them from far away. Looking at the scree, I saw some pika close to trail so I readied my camera and proceeded cautiously toward the scree. Once I got close I saw one was feeding on nearby shrubs and inched my way closer until I was about 15 feet away. Luckily the pika was hungry and paid me no heed. 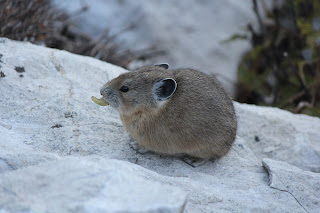 It even hung around long enough for me to shoot some video of it eating and running around:

Finally sated by great pika views I continued down the trail as the sun started to dip down behind the mountains. As I was approaching Silver Lake, I heard the light tapping of a woodpecker in some nearby pines. I was hoping for an American Three-toed Woodpecker, but I was thinking it would probably just be a Hairy Woodpecker or a Red-naped Sapsucker. I finally got a view of the woodpecker and it ended up being an American Three-toed. 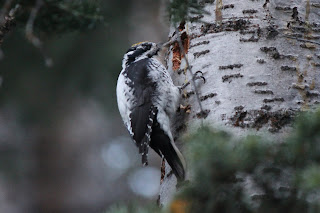 This bird was basically a lifer for me since my only other views of this woodpecker were poor and fleeting. The bird let me carefully approach it and also barely took notice of me standing nearby. I managed to get some video of it digging a hole to find insects.

I left the woodpecker as I had approached it, with it pecking away for food. I was excited about the great views I had had of both birds and mammals and thought about how sometimes it pays to go where others aren't. Even if the birding isn't the best, the chance for meaningful encounters with nature is high.

Loved this post! I was at Silver Lake on Saturday and got my first-ever views of a Stellar's Jay. Gorgeous bird!! I have some questions for you--I wanted to hike the other trails but didn't have time. Is the trail to Twin Lakes steep/scary or could kids and a mom do it? Were there any snakes?

I think this trail would be a good one for families. There are a few steeper sections, but I have seen many families do this hike.

I don't think there would be any rattlesnakes up there, maybe just garter snakes but I am not sure about this. Maybe someone else could weigh in.

Thanks so much for the reply. Again, I loved this post and the pictures and video. My kids loved it, too.

Sweet video capture on the three-toed!