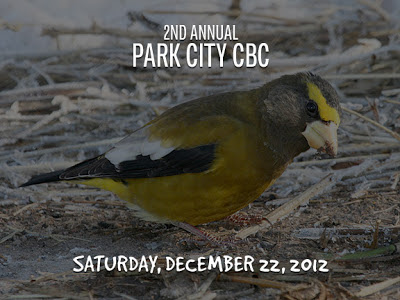 We are pleased to announce the 2nd annual Utah Birders Park City Christmas Bird Count and invite you to participate! The Christmas Bird Count (CBC) is a census of birds performed annually in December and January by volunteer birders. The purpose is to provide population data for use in science, especially conservation biology--though many people participate just for fun.

The 2012 Park City CBC will take place on Saturday, December 22, 2012 starting at 8am and going until 6pm (or until there are not more birds to be seen). We will split up into several teams to cover areas from Jordanelle north to Jeremy Ranch and from Summit Park east to Rockport and Peoa.

We will announce a meeting location prior to the event, but it has not been determined at this time.

For the CBC we will split into smaller groups of 2-4 birders. Each team will be led by a member of the Utah Birders that will help identify the species encountered and share some information about the birds along the way. For those interested we will meet at 6:00pm after at a location TBD to compile all the checklists and share stories from the day.

THERE IS NO COST TO PARTICIPATE in this years CBC.  National Audubon Society has done away with their fees, and we will not be collection money as a fundraiser this year.

We hope to see you on the 2nd annual Park City CBC!
The Utah Birders

If you can't make the Park City CBC, or if you can but you would like to do more than one CBC, consider helping out with one of the other 20 or so counts being conducted in Utah:
http://utahbirds.org/cbc/cbc.html

@Ryan: Funny that the Park City CBC doesn't show up on that list--despite having been set in the national CBC database months ago and visible there...

I'm going to be doing the SLC count as well as either Antelope or Fish Springs in addition to the Park City. Always a fun time. Being a part of starting an annual tradition with a new count was exciting last year and no doubt will be even more so this year. Looking forward to hanging with all the good people who turn out!

@Tim: I'm sure Milt would add it if you send him a quick message. I think he compiles that list from contacts through the individual counts. (For example, I had to email him this year's data for the Logan count.) Everyone else: another good source for finding local counts is the official CBC page: http://netapp.audubon.org/cbc/public/Search.aspx