The morning of September 5th we ate our last breakfast in Johannesburg and were promptly whisked back to the airport for a noon flight to Cape Town.  The flight took about 2 hours and as we approached the Cape the pilot told us to check out the mountain tops--freshly dusted with snow from storms the previous week.  This was a concern for us when we booked our trip as weather in Cape Town in September is historically--questionable.  2 out of every 3 days receive precipitation, and sometimes there are weeks straight where the weather doesn't open up.  As for our stay--well as the plane came around and looped in to land, it was sunny, with just a few clouds over the mountains.

Once on the ground we had a serious decision to make.  Do we rent a car and get thrown into driving on the opposite side of the road in a major city--or do we hire a car and only have drivers to get form point A to B when needed?  The costs were comparable--but the rental gave us freedom, something that tipped the scale favorably in that direction.  So we headed to the rental office, picked up a Toyota Corolla, and queued the most stressful couple of days driving I have ever had. 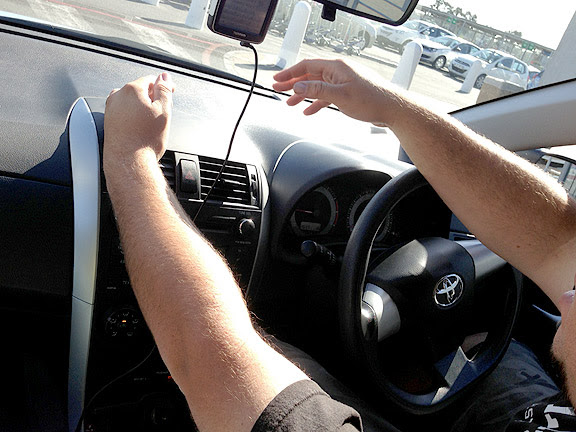 Me figuring things out on the other side of the road

Getting from the airport to our hotel in Sea Point wasn't difficult--I managed to hop on the highway, and make my way around the north end of Table Mountain and onto the main drag in Sea Point without incident.  From there it was a quick drive past the condominiums, apartments, restaurants, shops, and waterfront to the Atlantic Affair Boutique Hotel. 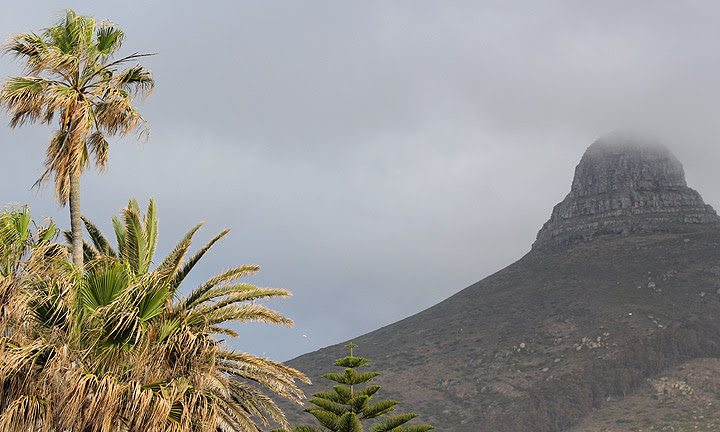 View of Lion's Head from the Hotel

We parked the car, checked in and put our bags up, and then headed right to the waterfront to walk around and look for something to eat.  I didn't bring a telephoto since we were walking in an area where I didn't expect to see a ton of birds, that I wouldn't have an opportunity to photograph later.  I put a 50mm lens on which limited what I could shoot, but ended up being alright.  From the moment we left the hotel the HARTLAUB'S GULLS were calling from the roofs, and building all around us where they perched.  From our hotel it was only 1 block to the Sea Point Swimming Pools which looked amazing--but it was a tad cold for a swim in my opinion.  The locals must have felt the same as the only thing in the pools were numerous KELP and HARTLAUB’S GULLS. 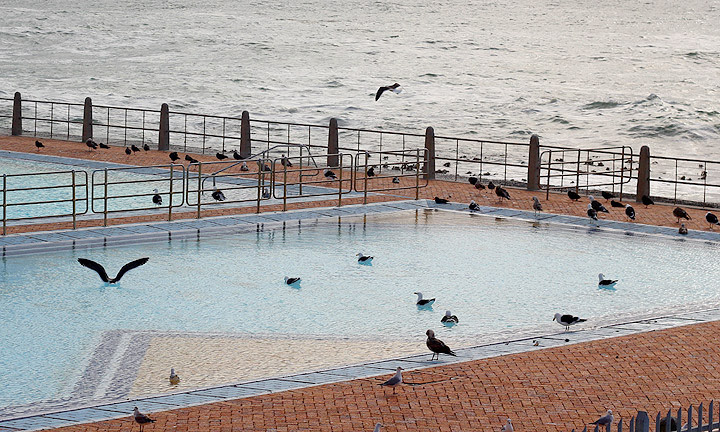 Kelp and Hartlaub's Gulls at the Sea Point Pools

We walked north as the waves crashed in.  The beach sat about 10 feet below the walking path, from where numerous people strolled in the middle of the afternoon. 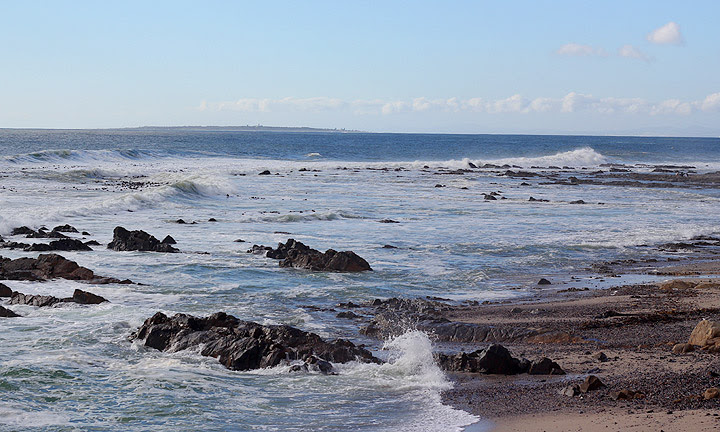 Sea Point Beach with Robben Island in the background

It was a great vantage point to scan the shore which aside from the gulls held very little. 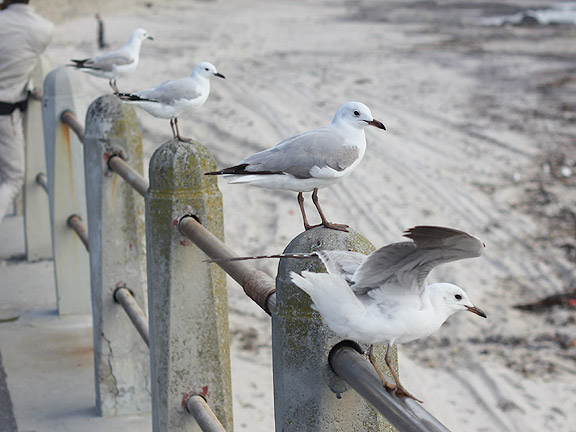 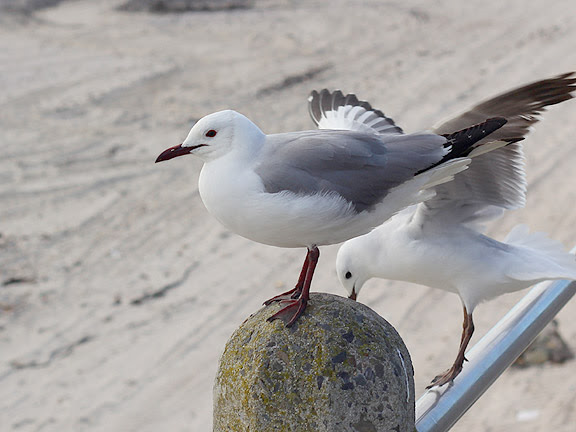 Hatlaub's Gulls, taken with a 50mm lens--they were very approachable

Several AFRICAN OYSTERCATCHERS ran along the rocks and a handful of CAPE WAGTAILS bobbed around at the base of the sea wall.  If I had brought my telephoto I could have gotten great photos of both species, but I figured there would be time for that later… oops. 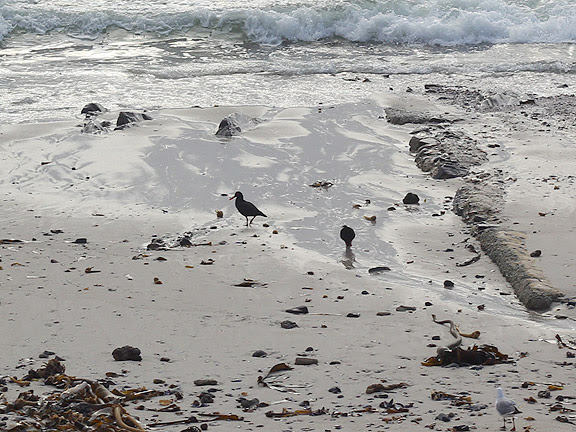 We only made it a mile or so before hunger got the best of us so we stopped and had an early dinner.  After we headed back to our hotel and called it a day--I could have slept for a week at this place because the bed was the most comfortable I’ve ever slept in.  But the next morning we had to get up and be to the VA Waterfront to catch the 9:00am ride to Robben Island.  Using the GPS we headed to the area, but soon found that the route it took us ended up on a street that was closed till later in the day--go figure.  Eventually after making several U-turns and several wrong turns, we ended up in a parking garage at the waterfront.  After asking someone where to go we found ourselves in line with about 150 school children--and maybe 50 or 60 tourists.  We already had tickets so it was just a matter of waiting to get through security.

The boat to the island is alike a giant 3 decker speed-boat.  The bottom deck is theater style row seating and probably holds close to 200 people.  The second level is tables and maybe holds 40 or so.  The top was open-air and only has room for 16 I think--we were too late for the top--plus it was cool this morning so we sat inside.  Despite the huge boat the 12’ swells rocked the thing from side to side while we sped across the open water towards the island.  This made for an interesting time as number of the school kids couldn’t handle it.  I think in all at least 6 kids puked, and several puked all over other students and even a couple tourists.  The smell was atrocious and all anyone I think wanted was off the boat.  Because of this fun I didn’t even bother to look for birds on the way out.

Once at the Island we exited and grabbed seats on one of the tour buses.  Birding from the buses was difficult given they packed 5 people across in space typically for 4.  I did see CAPE FRANCOLIN and CHUKAR as we drove, both new trip birds, and the Francolin was a lifer. 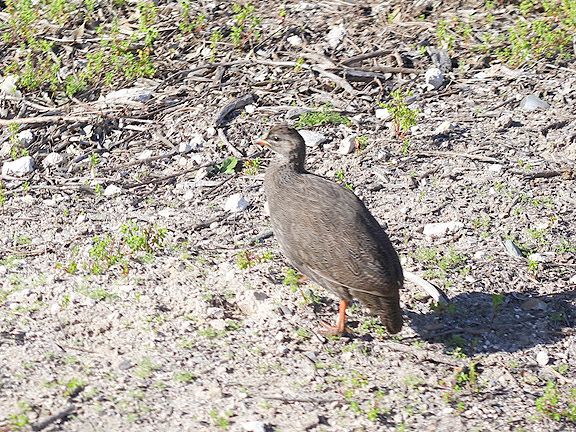 At the South end of the island we were able to exit the vehicle to view Cape Town and Table Mountain. 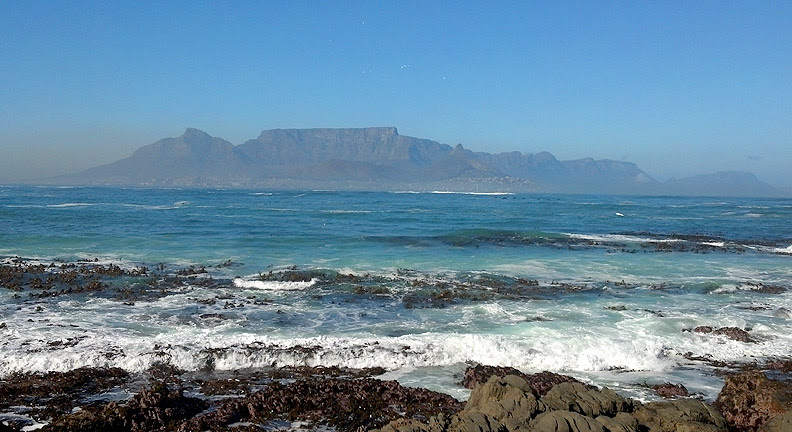 While the view was amazing there were few birds to go with it.  CAPE CORMORANTS flew by in the distance, while AFRICAN SACRED IBIS passed overhead.  There were a few LITTLE EGRETS along the beaches as well as AFRICAN OYSTERCATCHER.  Missing surprisingly from anywhere along the beaches here were shorebirds--I just must have been in the wrong spots. 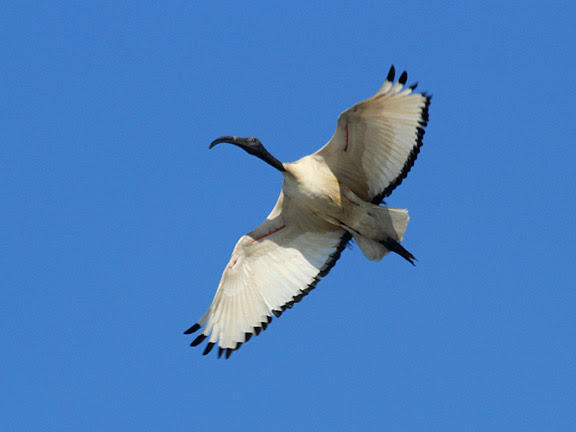 After the tour of the island you get to tour the actual prison, with someone who actually served time.  Our guide was a political prisoner named Sparks who I believe spent 8 years as a prisoner, and served during the time Nelson Mandela was a prisoner.  Now Sparks, and others actually live on the island and lead these tours--it’s truly incredible. 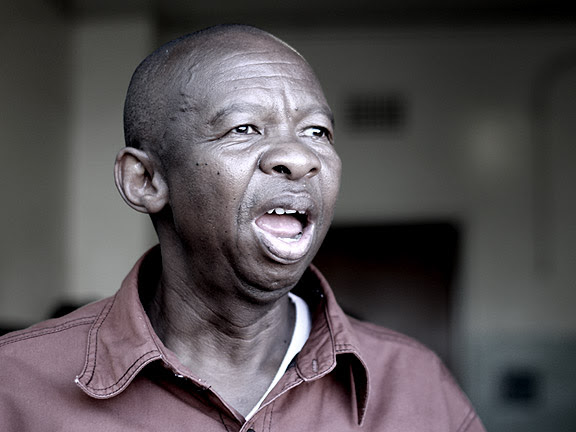 Sparks was a former political prisoner at Robben Island

During the tour I only noticed one bird--as we walked between two buildings we stopped next to a tree and while we stood there I watched a brilliant MALACHITE SUNBIRD fly in, land long enough for me to snap a couple shots with the 50mm lens, and then take off and out of site.  It was the one and only of the trip, a lucky snag! 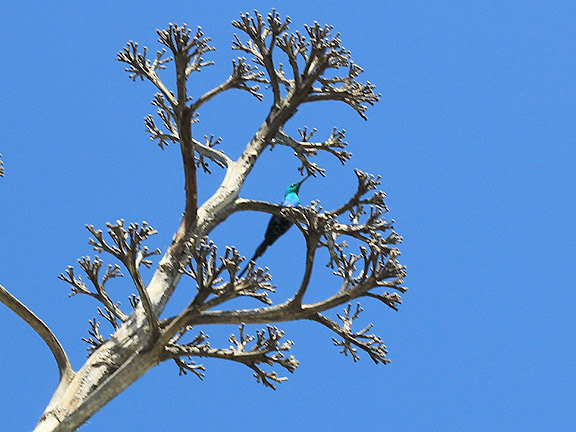 The only Malachite Sunbird of the trip, captured with a 50mm lens

The island is actually home to a feral population of Indian Peafowl that do reproduce and are recognized as being “wild”.  I had hoped to see one, but strangely did not.  I guess I need to make a trip to India to actually get one!  After the tour we headed back to the boat and snagged a couple seats up top.  No point in sitting in the enclosed portion again and risk having to smell that smell again.  Plus the view from the top was amazing--so that made it all the better.

As we sat in the harbor waiting to take off a pair of AFRICAN OYSTERCATCHER chased each other flying by the boat several times.  I was able to get the telephoto on for some shots finally and snapped one decent one on one of the passes by. 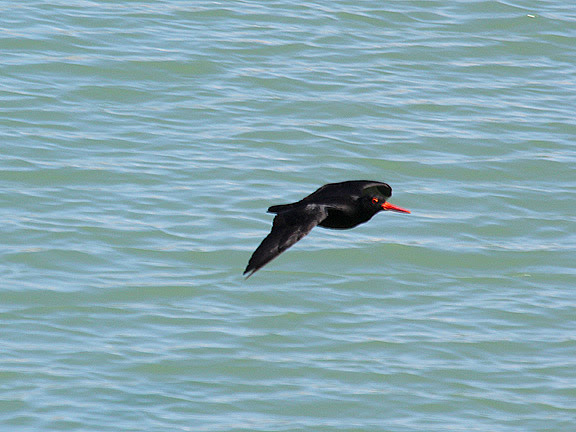 African Oystercatcher cruising through the harbor

When the boat finally departed we slowly left and I could see there were dozens of CAPE CORMORANTS on the jetty leading out to the ocean. 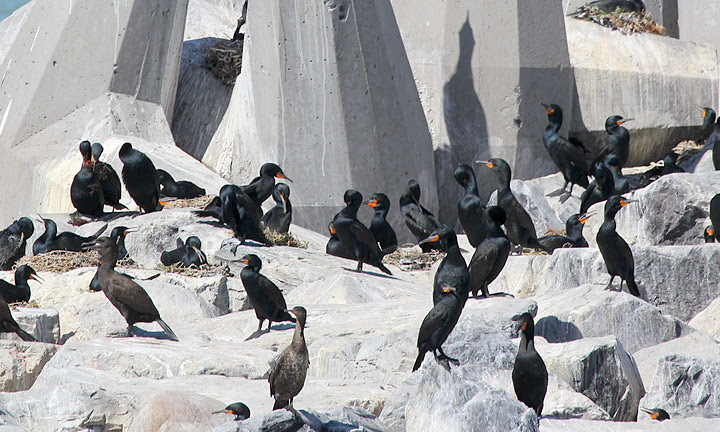 Cape Cormorants on the jetty at Robben Island

Mixed in was something a little more special in no less than 6 BANK CORMORANTS, and endangered species with only 4000 individuals left in the world. 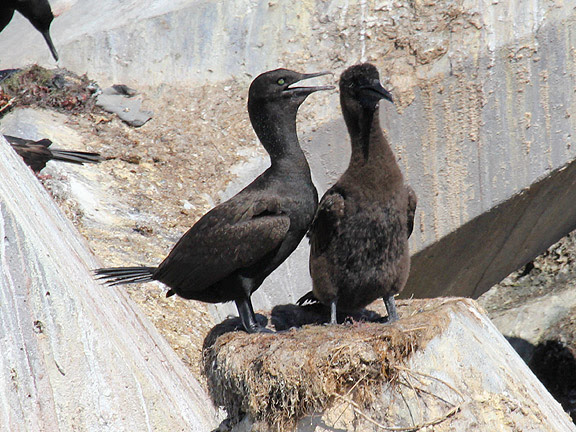 A pair of the endangered Bank Cormorant

There was also a CAPE FUR SEAL that was laying on the rocks with all the cormorants, so I had to take a picture. 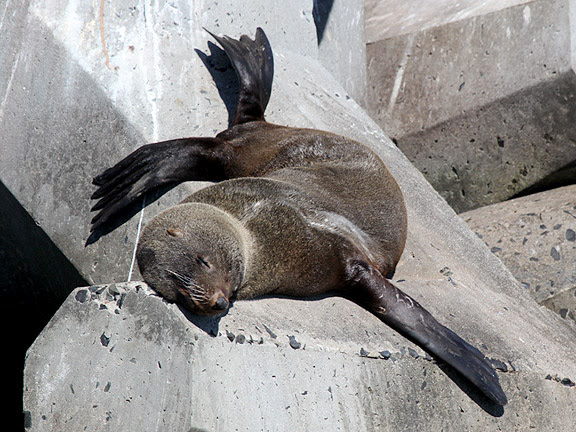 The ride back wasn’t quite as rocky--maybe it was just the fact we had the fresh sea-breeze now.  Flock of cormorants and AFRICAN SACRED IBIS passed heading either to the island or to the mainland.  There were few gulls, but one small group also had a few SWIFT TERNS mixed in, another lifer and one of the few birds seen on the crossing. 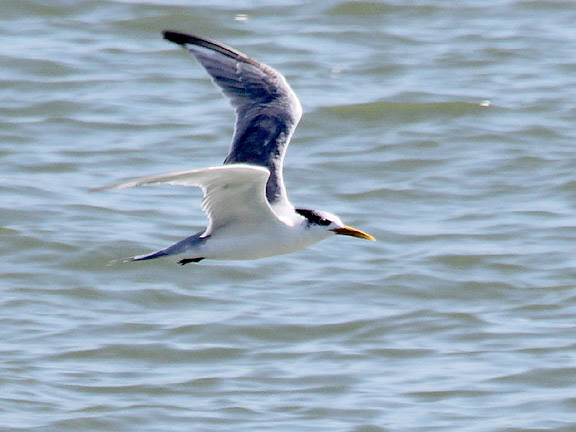 Bad shot of a Swift Tern on the crossing

The highlight of the ride back though came just about half way when I looked to the right and added a new family to my life list, spotting a couple JACKASS PENGUINS swimming.  I snapped a bunch of shots of which not a single one turned out--I did manage to salvage one of the soft but not as bad shots just to have.  Most of the frames came back of just empty water as the motion of the boat made it difficult to get the shot. 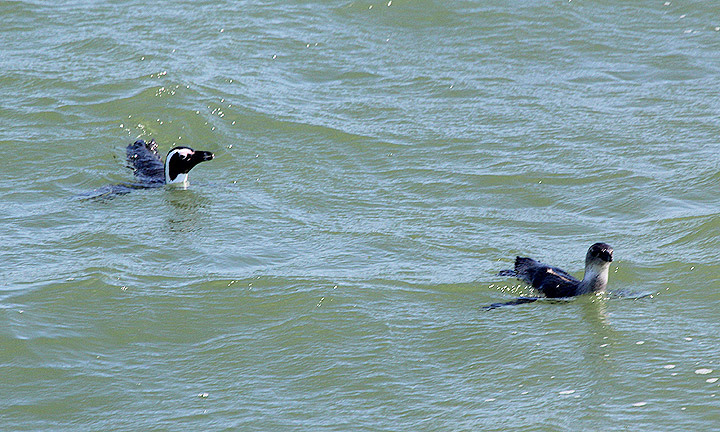 My first ever PENGUINS!!! Jackass Penguins 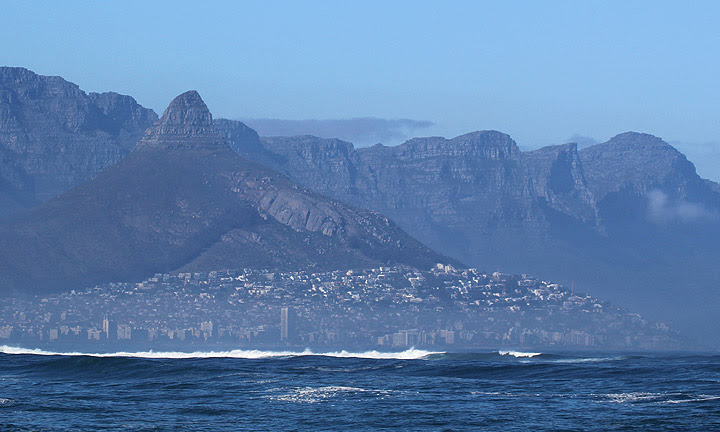 Cape Town, Lions Head, and Table Mountain from the boat

Back on land we did some sightseeing around Cape Town en route back to our hotel. After a quick break we decided to go out again.  This time we had to make a quick stop and had trouble finding the place we were going--when we finally did, I had to flip around to find a place to park.  I promptly veered towards the curb but judged the angle incorrectly.  The tire blew on impact.  Less than 24 hours and I had rendered the car inoperable.

I managed to get a hold of a repair service that came out and changed the tire out--then because I didn’t want to be driving on the spare all week, we returned the car right in downtown Cape Town.  By the time all was said and done it was 5:00pm and there wasn’t much to do.  We made a few stops in down town before returning to our hotel for the night.  It wouldn’t be fun travel without some adversity to mix things up right? 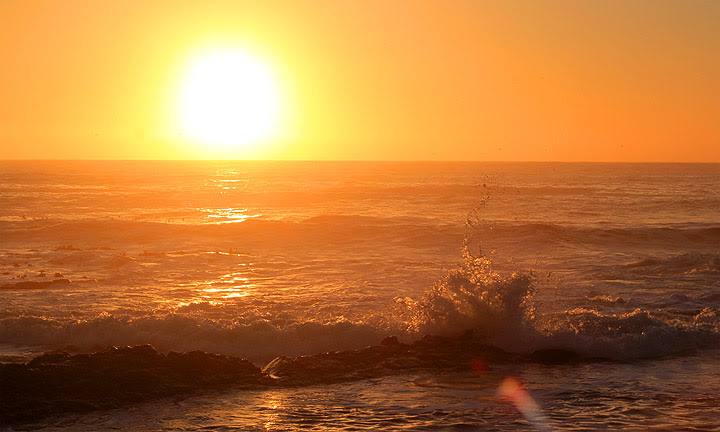 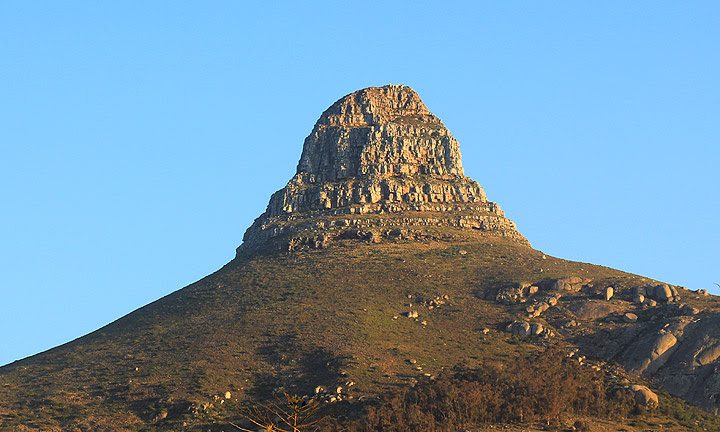 Lion's Head from the beach at sunset

First things first I had to call Cape Town Pelagics to make sure my trip for the following day was still on--they often cancel or move trips due to weather, or even swell conditions. I called and confirmed it was--and as a plus it was leaving from Hout Bay which was 25 minutes closer than Simon’s town.  I packed my bags and got everything ready to go for the next day--Sam was going to stay and have a spa day.  After I would pick her up and we would make our way south to the Fish Hoek area where we would be staying the following 3 nights.  As for now I dreamt of seabirds.

Simply coooool,I really love your writing style that you are using for your posts and stuff

@Jack: Thanks! I appreciate it!

new marine flooring. Very Nice and good article thanks for share this article

If you want to see more photos of birds, I share you my blog.