Our second morning in Africa our driver and guide from Outlook Safaris was scheduled to pick us up at 7:00am.  I set my alarm for 6:00 so I could get up and spend 30 minutes looking for birds around the hotel before we left.  My alarm never went off--as my cell phone apparently died during the night, but luckily our driver showed up at 6:30 and the front desk called to let us know.  We hurriedly packed and headed to meet Bert Palthe, a private birding and wildlife guide from Lawson’s Tours.  He was brought in as an emergency replacement for our scheduled guide, which is a whole other story.  In any event we packed our bags in the Toyota Condor (think RAV4 but longer), made a quick stop at the airports to pickup power converters (oops), and were headed east towards Kruger Park. 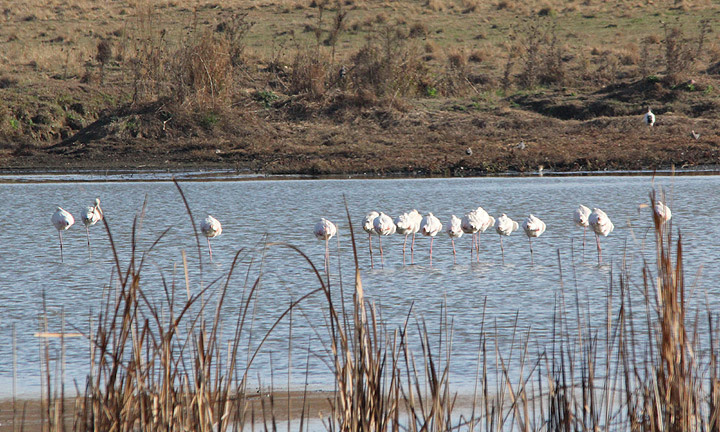 Small flock of Greater Flamingo outside of Johannesburg.

Our first stop was a small pond along the highway which greeted us with about 40 GREATER FLAMINGOS, a number of SPUR-WINGED GEESE, BLACK-WINGED STILT, and AFRICAN SNIPE.  There was a lone flamingo wading nearer to the shore, that appeared slightly smaller and happened to have an all dark reddish-black bill--our only LESSER FLAMINGO of the trip!  This species is rare away from most nesting locations, so finding a lone bird seemed like a good fortune. 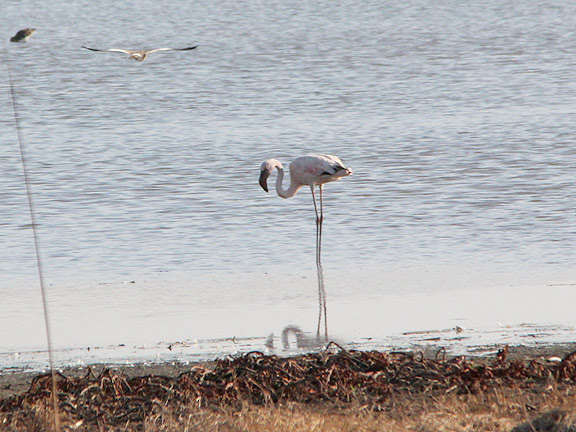 Lesser Flamingo was a surprise find near Johannesburg.

As we were about to leave I asked what the sparrow-like birds were in the brush--I couldn’t put a name to them.  After a quick look Bert said they were LONG-TAILED WIDOWBIRDS--one of my target species.  They were all in winter plumage, so instead of long black tails, they looked more like muted Savannah Sparrows. 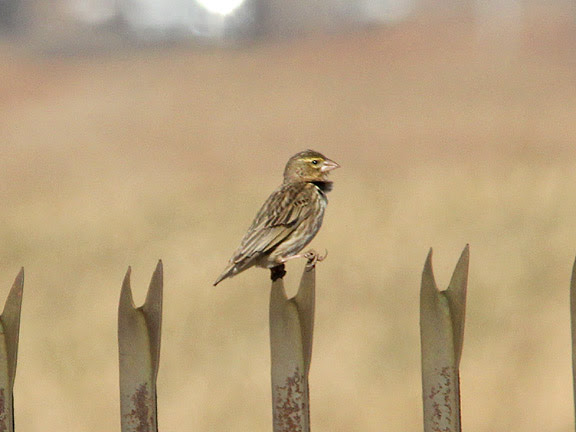 Back on the road stopped for gas only to have Bert inform us the vehicle had a bad tire, and there was no jack or tire iron--yikes.  Sam and I wandered around the gas station, I found more Long-tailed Widowbirds, and then a flock of about 30 RED-COLLARED WIDOWBIRDS--same boring winter plumage.  After about 20 minutes Bert let us know we would have to go back to JoBurg--a tad frustrating.  But as luck would have it another Outlook Safaris vehicle that was taking 3 guests to Kruger pulled up to get gas right then--they worked it out to get us in the vehicle and we were back on our way, with 6 people now. 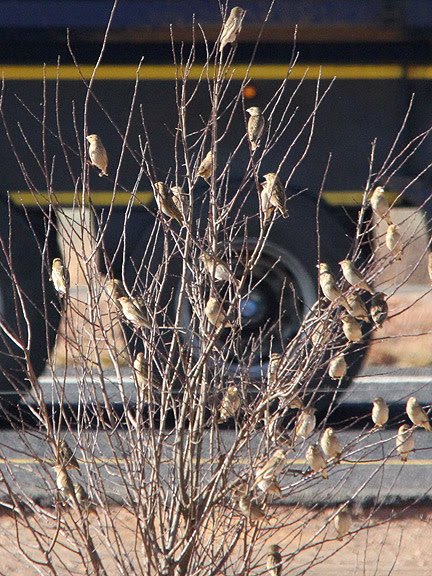 Tree full of Red-collared Widowbirds at the Route 12 Rest Stop at KM 494.

We made a couple more stops but didn’t see much--it took about 4 hours to get to the park, where we entered at Phabeni Gate.  Once there Bert had to fill out paperwork so I wandered off to find birds.  The first one i located was a gorgeous little waxbill, known as a BLUE CORDONBLEU.  That was followed by a SOUTHERN DOUBLE-COLLARED SUNBIRD, and a small flock of BRONZE MANNAKINS--the only of the trip. 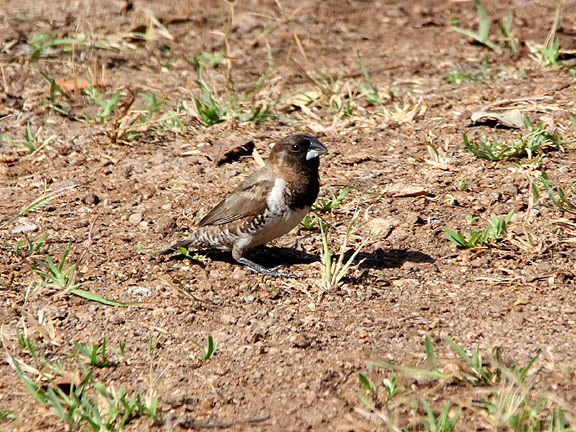 The others in the group were taken off with another driver while Bert who was hired as a private guide took Sam and I into the park., making our way from Phabeni Gate to Skukuza camp.  Right off the bat we started seeing mammals and birds.  There were lots of IMPALA, followed by CHACMA BABOONS. 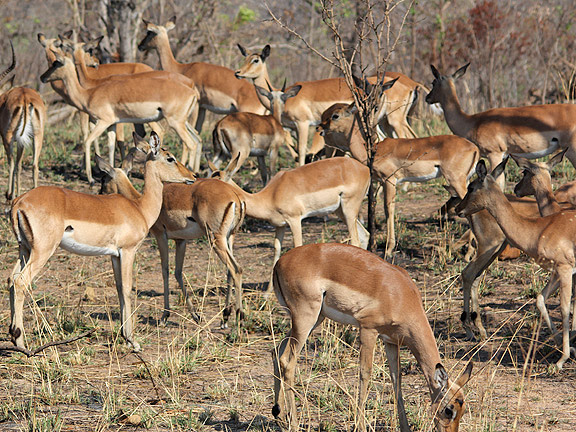 Impala were the first we saw and most abundant animals in Kruger National Park.

Some of the first birds included the FORK-TAILED DRONGO, which were almost always found in the vicinity of game.  If you saw a drongo in a tree there was usually a mammal nearby. 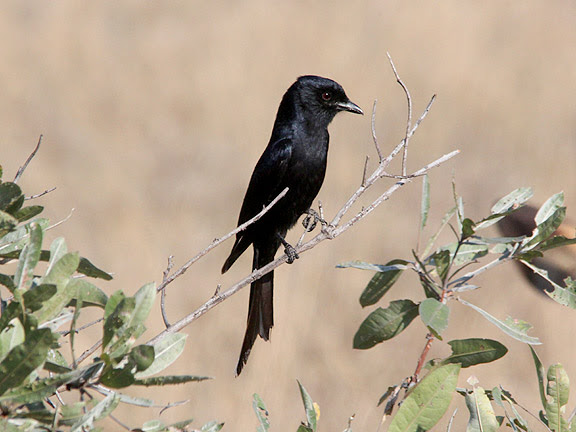 Fork-tailed Drongo--actually bigger than a kingbird.

It wasn’t long before we noticed our first KUDU, then GIRAFFE.  There were the glorious MAGPIE SHRIKES moving about in groups of 3 and 4. 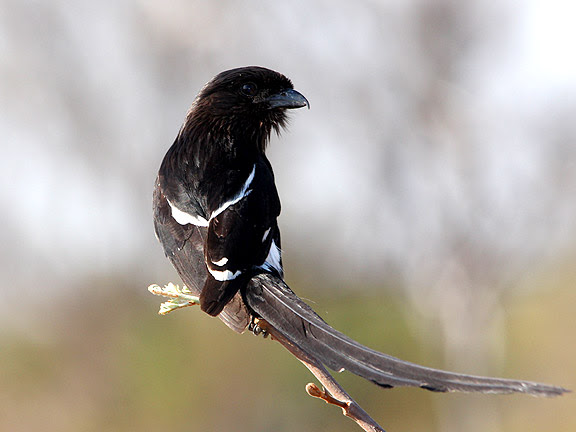 We saw SOUTHERN YELLOW-BILLED, RED-BILLED, and GRAY HORNBILL all in a matter of minutes.  The birds were abundant! 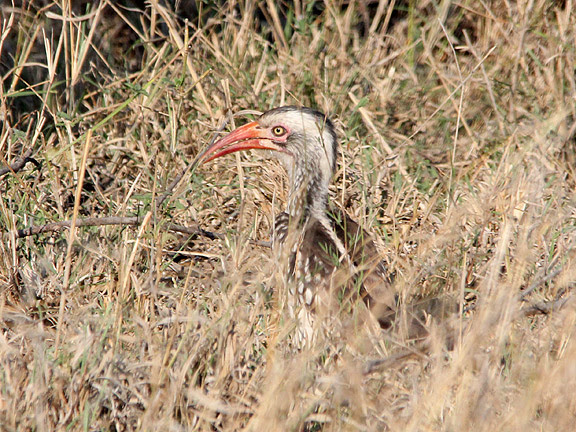 Then we saw our first ELEPHANTS of the trip--the giants of the Savannah.  There is little to compare looking face to face with an Elephant in the wild. 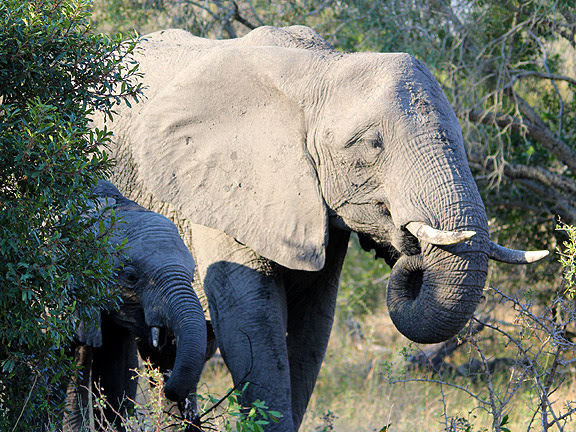 Bert knew the mammals and the birds--the ones I didn’t know he was quick to point out--like the first, second, and third RATTLING CISTICOLAS--imagine empid ID but with wren-like skulking birds.  Bert also knew the park like the back of his hand--we quickly moved off the main roads and started down side roads.  The first stop was a water hole where we spotted our first HIPPOPOTOMAUS and NILE CROCODILE.  We happened to also see our only WOOLLY-NECKED STORK of the trip here.  GREAT and LONG-TAILED CORMORANT, and AFRICAN DARTER were all present, but surprisingly there were few other birds at the water. 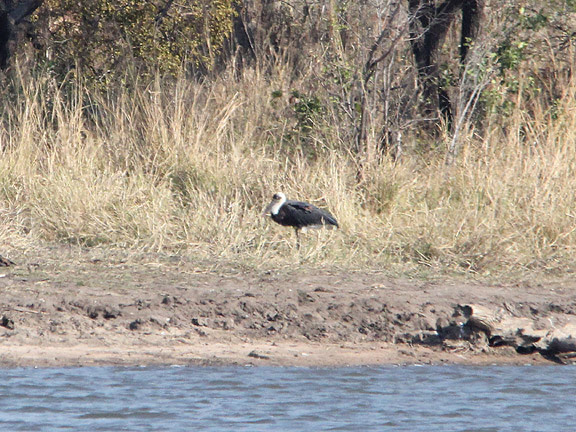 The only Woolly-necked Stork of the trip.

We continued  along, occasionally seeing CRESTED, NATAL’S, or SWAINSON’S FRANCOLINS running across the road.  These game birds are basically between a Chukar and Grouse in size and were plentiful everywhere in Africa.  At one point we stopped to watch the GRAY GO-AWAY-BIRDS playing in the trees when we spotted our first woodpecker of the trip, a BENNETT’S WOODPECKER.  A few minutes later across the road we added BEARDED WOODPECKER, and our first LILAC-BREASTED ROLLER.  This species should be renamed from roller, to STUNNER! 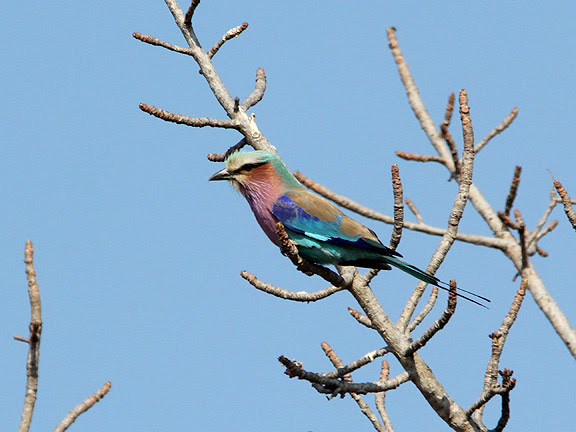 Lilac-breasted Roller are one of the most stunning birds of the Savannah.

As we drove through a riverine forest patch looking at ELEPHANTS, I spotted a pair of eyes-staring at us from the bush.  I yelled for Bert to back-up--there was a PEARL-SPOTTED OWLET sitting just off the road.  This species is similar to our Pygmy-Owl, and the only ones I saw were this first day (I spotted another one an hour later). 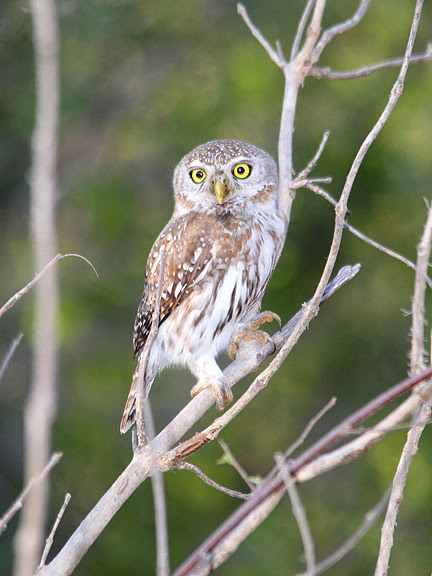 As we continued through the trees Bert spotted a TAWNY EAGLE perched in one tree, while I picked out my first BATELEUR in another.  What a magnificent hawk, and one I was fortunate enough to see plenty of the following days. 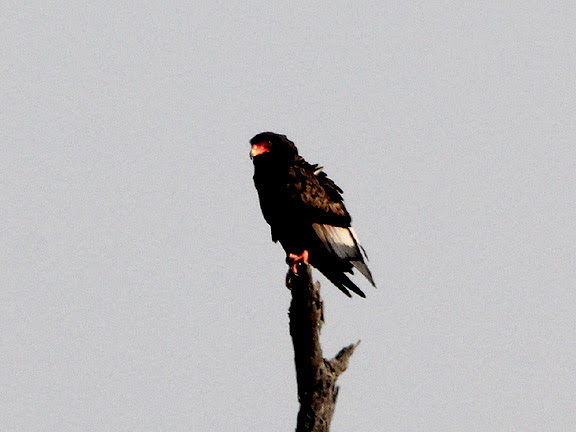 The Bateleur, also called the "Short-tailed Eagle", as it basically has not tail.

As we came upon another water hole Bert spotted a cool looking robin--the GROUNDSCRAPER THRUSH which I wasn’t able to get a picture of.  At the water hole we saw an odd pair--in a HIPPO, closely watching an ELEPHANT taking a bath.  It was quite humorous seeing the Elephant  basically rolling over in the pool just feet from the nervous Hippo.  There weren’t any birds here, but the scene was incredible for what it was. 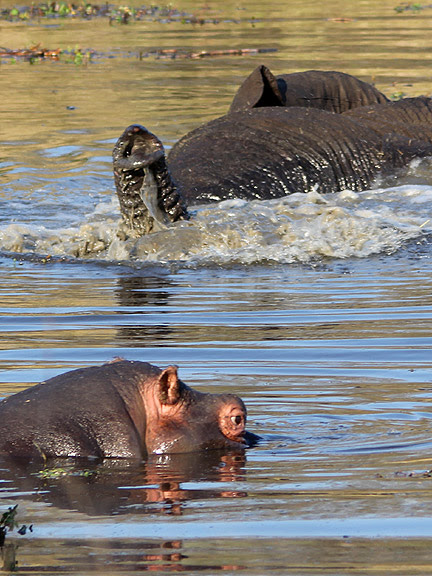 Elephant and a Hippo sharing a water hole.

We continued along the back roads as the sun started to get low to the west.  We had to be in the gates at the camp by 6:00pm or we would get fined--guests are not allowed to travel on the roads in the park after 6:00pm and that is one rule they take very seriously.  Bert being the excellent guide he was kept the mileage (kilometerage?) and time close at hand.  As we rounded a bend there in front of us on a lonely stretch of road, a prize emerged from the bush--2 WHITE RHINOCEROS peered out.  The magnificent beasts slowly lumbered on to the road and made their way across. One young and one adult, we watched in awe of the wondrous creatures.  This species of animal is under constant attack from poachers, who only want the valuable horns--which ends up in Asia where wealthy buyers purchase the powder of ground horns as an aphrodisiac.  Sad, pathetic, and truly a gruesome undertaking for something that is pure rubbish, and tantamount to “magic”. 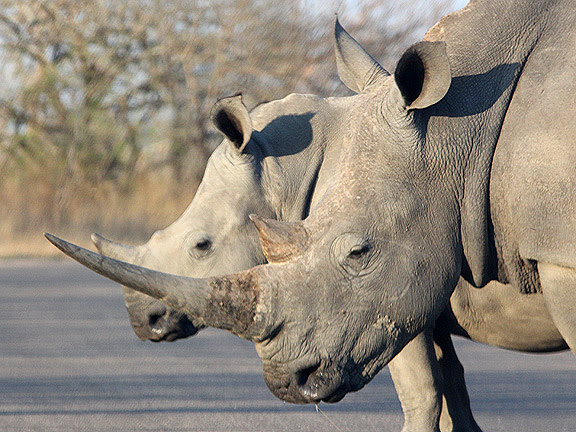 Sorry for the rant, but the needless slaughter of Rhinos in Africa for the selfish, and bullshit reasons coming from Asia grind my gears.  We were told by numerous people that the way they deal with poachers that get caught are often times handled in an eye for an eye manner--as far as the authorities know, the poachers are never found--if you catch my drift. 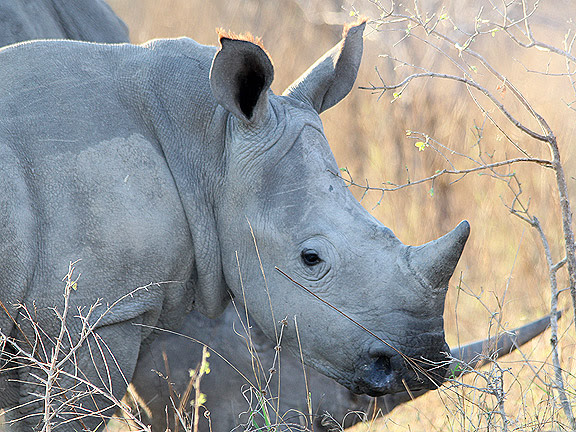 After the excitement of the Rhinos we continued on, having a GOLDEN-BREASTED BUNTING fly into a branch right next to the car. 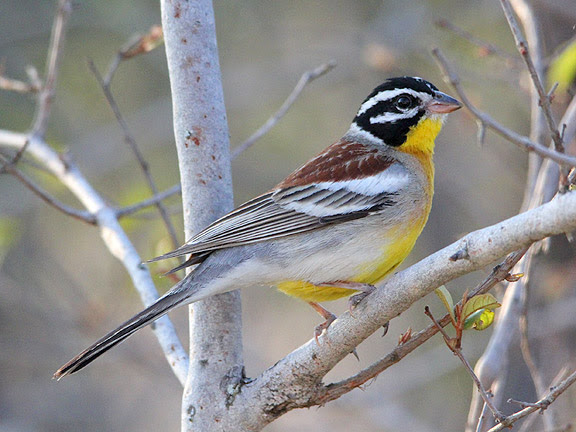 I only saw a few more of this gorgeous little bird, but the first look was the best. BURCHELL’S and CAPE GLOSSY-STARLING were tacked onto the day, trip, and life list along with a handful of audibles.  As we got closer to camp we pulled up to a family of SPOTTED HYENA loafing along the side of the road.  They could have cared less about us as we watched from mere feet away. 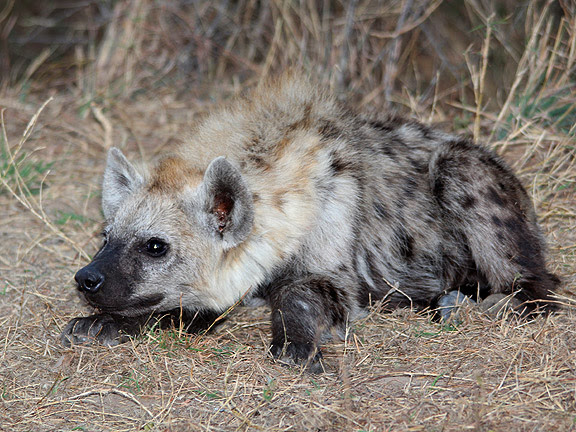 We finally pulled into Skukuza Camp at 5:55pm, with Bert using every moment outside the gates to show us as much wildlife as possible.  While we waited for him to check us in, I spotted WIRE-TAILED SWALLOWS flying among AFRICAN PALM, and AFRICAN BLACK SWIFTS over the camp offices just inside the entrance. 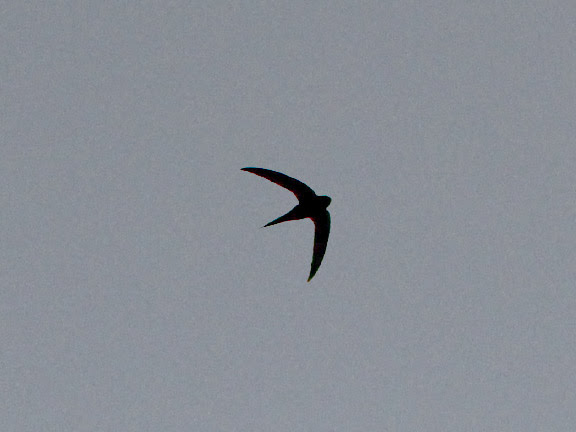 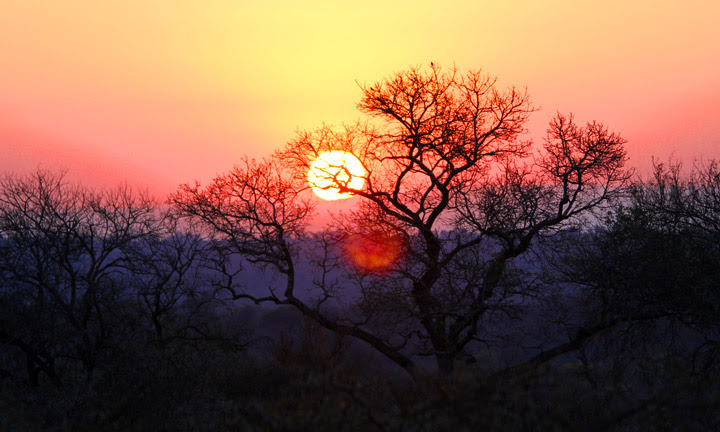 After a few minutes we were on our way to hut 166, our home for the next 2 nights. After getting settled in as it got dark, we headed down to the tent camp area where Outlook Safaris keeps a full time kitchen and Chef.  As it turned out the Chef happened to be gone on leave, so one of the guides was stepping in for him--you would never have known he wasn’t a chef as the meals he prepared were delicious, and far better than we expected from what we’d heard about park food from others. After dinner we turned in for the night--aside from seeing some of the coolest animals in the world on our first day, I had tallied 56 lifers. An incredible start to wild Africa.

photos from birding between JoBurg and Kruger Park can be viewed at:
http://www.timaverybirding.com/photos/thumbnails.php?album=1105