Tuesday September 3rd, I woke up before light in our rustic cabin at Kurisa Moya Nature Lodge.  The fire died out during the night and the room was freezing.  I got ready, relit the fire, and headed out to meet Bert.  It was our last day with him as our guide, and it was a day set aside for some serious birding.  We started our morning by walking up to the main house where the owners put out seed and peanut butter every morning for a number of species that readily come in to eat.  We met up with David who we booked for 2 hours to help track down a couple specialty birds, but first we watched the feeders. 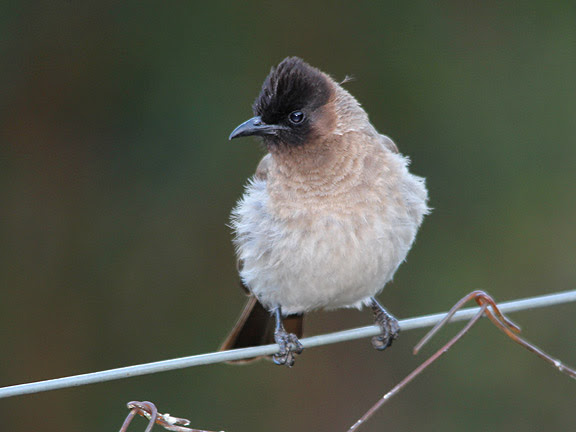 It was only moments before the first COMMON BULBUL flew in, then came the CAPE ROBIN-CHATS and the AFRICAN WHITE-EYE.  The looks were incredible and the birds were stunning. 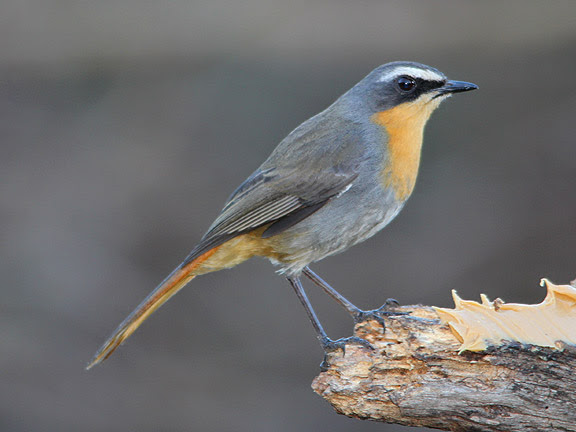 Cape Robin-Chat at the Peanut Butter 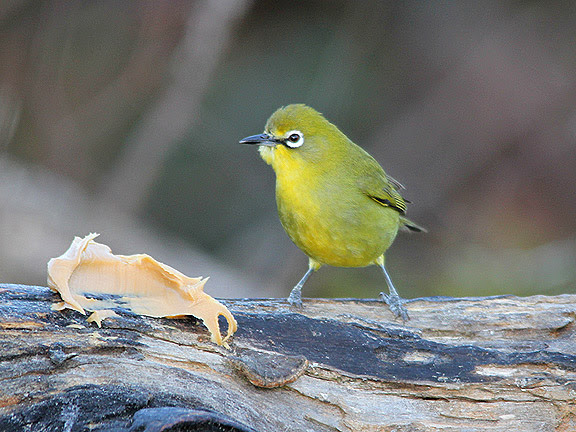 African White-Eye at the Peanut Butter

From just feet away we watched.  That’s when the good stuff started to make its way in.  The first specialist was a SWEE WAXBILL.  Soon a whole flock had joined, and these gray, black, green, and red beauties zipped between the bushes behind and the feeders. 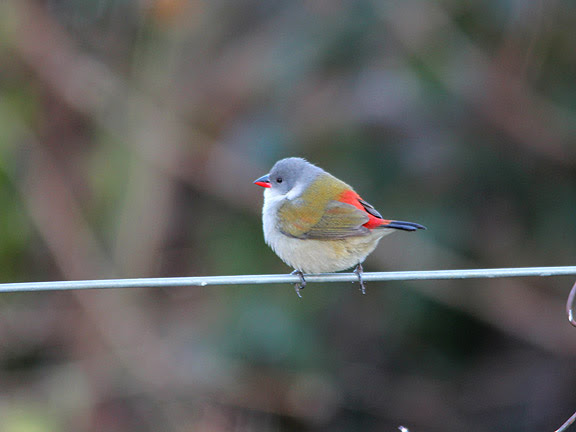 The waxbills were followed by the BLACK-AND-WHITE MANNAKINS which were much more skeptical of visiting with us watching.  They took a little more time but eventually showed as well as the waxbills. 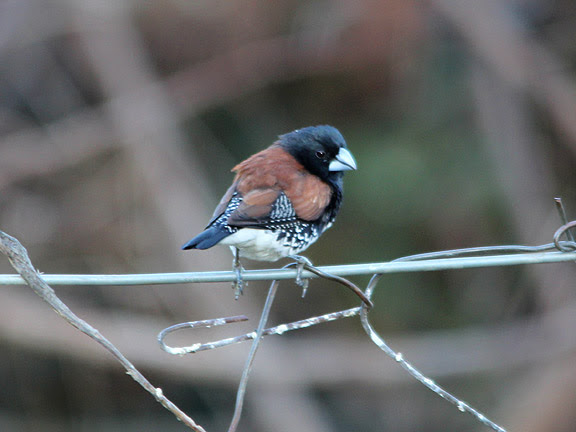 Black-and-white Mannakin near the feeders

As stunning as these species were what followed was an even more vibrant and truly stunning species.  The CHORISTER ROBIN-CHAT.  The field guides don’t really do this bird justice--as I passed it off as just another robin-like bird.  But the orange breast set against the steel-blue body and black mask really made this species stand out amongst the others. 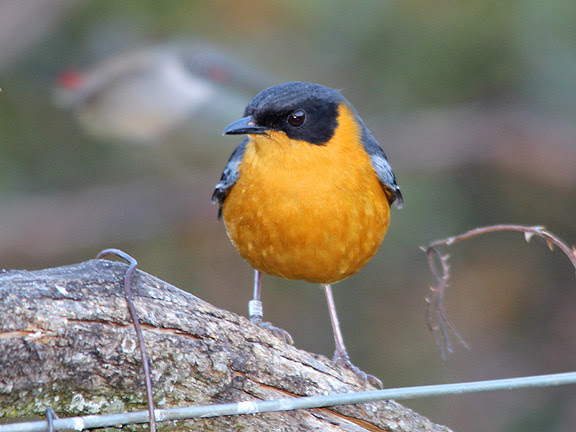 Chorrster Robin-Chat with a leg band

Other birds came in but refused to visit the feeders.  There was a SOUTHERN BOUBOU that came out a couple times, and in the trees nearby BAR-THROATED APALIS, YELLOW-STREAKED GREENBUL, and YELLOW-FRONTED TINKERBIRD were all seen or heard. 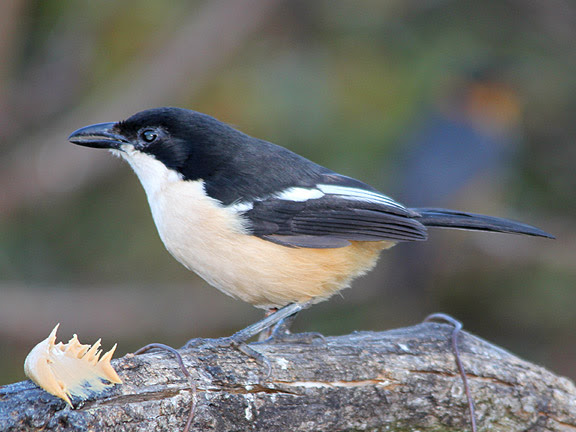 Southern Boubou at the Peanut Butter

After watching the feeders for maybe 30 minutes David led us into the forest.  We followed the main road back down towards the cabins through a coniferous patch.  Here the constant shattering of AFRICAN WHITE-EYE could be heard in the tree tops above.  An AFRICAN GOSHAWK also called busily out of sight.  Birding in this forest was difficult--there was little to no understory and the birds that were present were at the tops.  David stopped us and pointed out a call ahead of us--it was the NARINA TROGON! 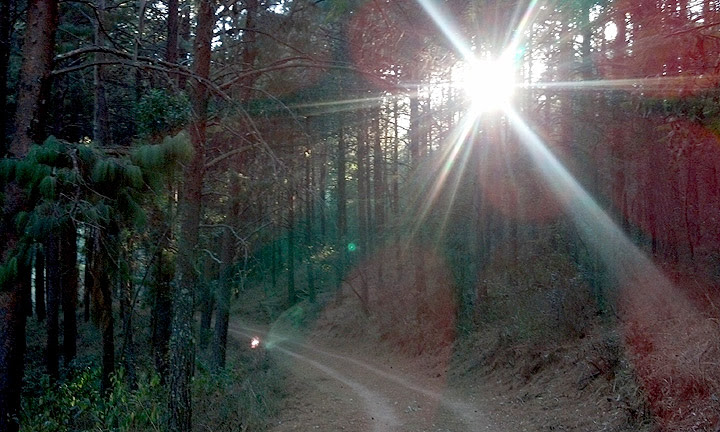 The road through the forest at the lodge.

The Narina Trogon was the #13 on my top 25 list for Africa--it probably should have been higher, but non-the-less, still a top pick.  After a minute we spotted the bird flying, away and over the mountain top--no photos and less than stellar looks--such is birding.  As we neared the cabins David took us up a side road back into a more deciduous forest.  It was like being in the jungle again--now there was undergrowth, mid-growth, and the tree tops. 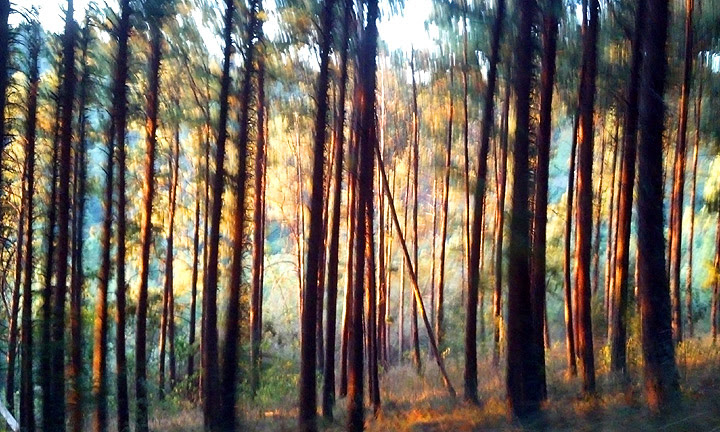 Looking through the forest at sunrise.

We picked up the common stuff we had the day before and earlier already.  David had put some food out the night before to try and get us a look at a GREEN-BACKED TWINSPOT--a highly sought after songbird in the area.  We spent about 15 to 20 minutes following one calling in the bushes but never got better looks than to just see the spotting as it darted from bush to bush.  As we worked our way along a path David grabbed me and told em to look up, way up above us in the canopy--there it was, a male NARINA TROGON perched out in the open! 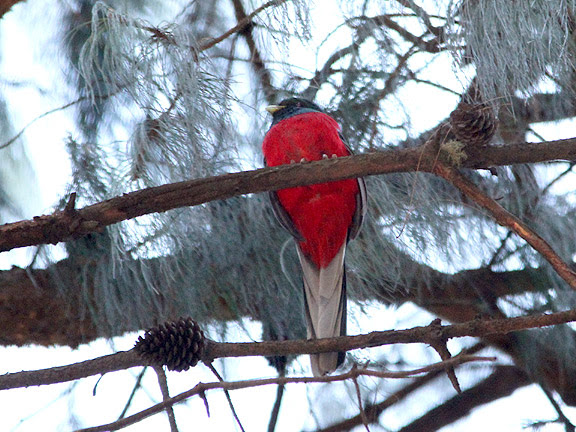 The bird was about 100’ above us and kept zipping around.  The light was awful and even trying all the tricks the shots I got were decent enough to see what the bird was but far from ideal. 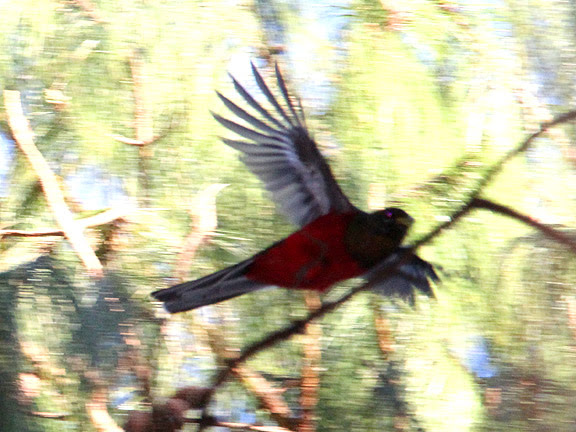 The male was joined by a female and we sent some time watching them fly about high in the trees. 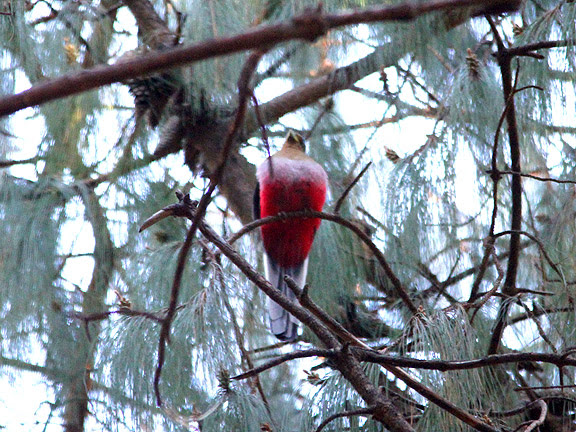 The female Narina Trogon also came in with the male

As we continued into the forest David pointed out a singing WHITE-STARRED ROBIN.  I had wanted to see this bird, but they spent the entire morning out of site.  We snagged others like the OLIVE THRUSH, OLIVE WOODPECKER, and the OLIVE BUSHSHRIKE, and even a couple calling SQUARE-TAILED DRONGOS.  We found one opening where there seemed to be a lot of activity. TERRESTRIAL BROWNBUL were making all kinds of racket tearing into leaf piles under the trees.  Out of nowhere a CAPE BATIS flew in and landed nearby. 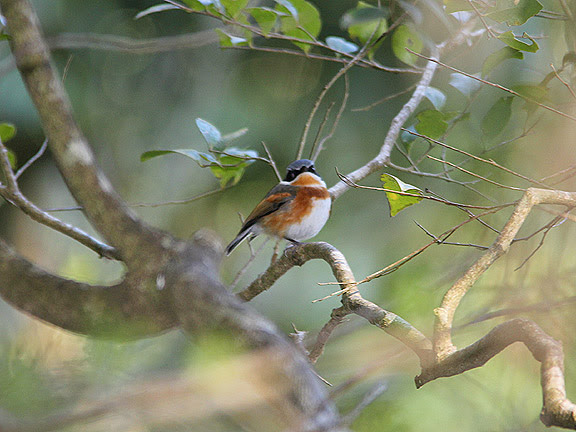 The only Cape Batis of the trip

The light wasn’t great and I almost passed up trying to get photos, thinking I would see more in Cape Town.  I decided not to risk my luck, and it was a good thing--I wouldn’t see another.  Just up the trail we added a pair of AFRICAN CRESTED-FLYCATCHER.  These birds zipped around making them hard to shoot as well--I did get lucky and snag one okay shot. 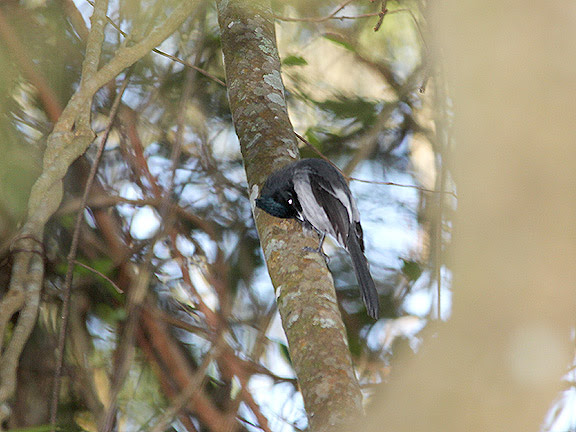 We continued on towards the end of the trail which was a giant Cabbage Tree--apparently the biggest in the world and one of the highlights of the property.  David stopped us to point out a call in the trees ahead--it was like a grinding throat clearing scratch--it was a KNYSNA TURACO!  This species came in at #8 on my top 25--I would have been okay seeing any of the 3 green turacos found in southern Africa, but figured Knysna was my best bet.  As we walked David warned not to look up with out mouths open--letting me know that turacos were infamous for pooping on people before taking flight.  As we got closer to the sound it stopped when we had to be almost right under it.  We all scanned the trees--and finally I spotted the bird--it was magnificent. 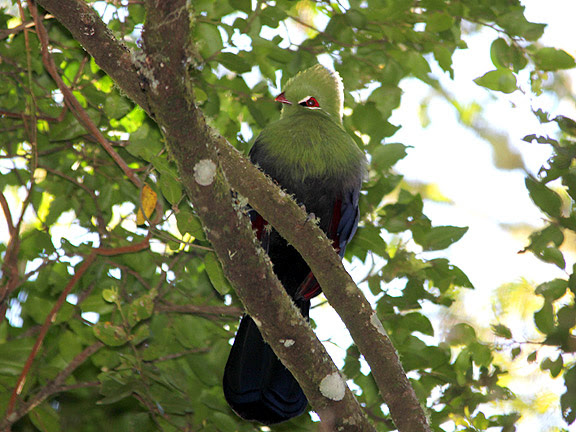 Lifer Knysna Turaco sitting in the trees above

I took a photo then got both the guides onto the bird--I love when that happens.  We spent a while watching the gorgeous creature which watched us back, stretched its wings showing the brilliant red flight feathers, and eventually flew into the open a short distance away.  I had snagged my last target bird for the morning at Kurisa Moya--it was an utter success. 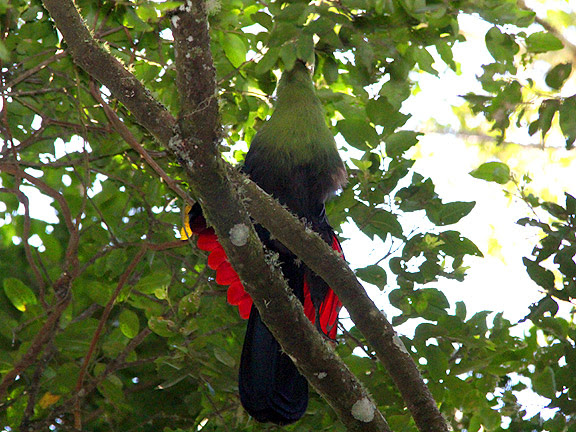 We stopped at the Cabbage Tree and just relaxed for a few minutes before heading down trail towards the cabins. 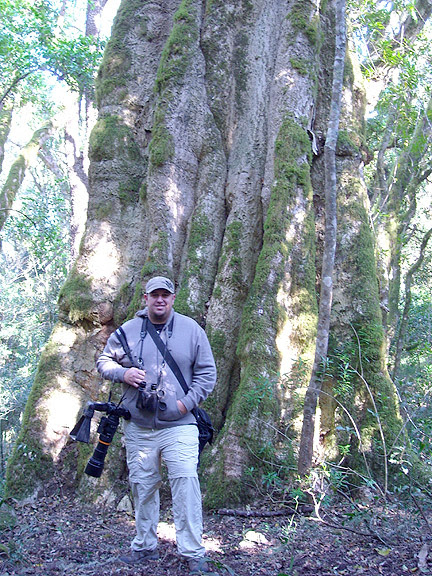 Me at the giant Cabbage Tree

We added DUSKY-BROWN FLYCATCHER calling, and a singing AFRICAN EMERALD CUCKOO on the way back, and that was it for the birds at Kurisa Moya.  I ended the morning with 30 species of which  two-thirds were life birds--an extraordinary morning.  Back at the cabins we thanked David and parted ways--he was an excellent guide and I was very appreciative of his help. 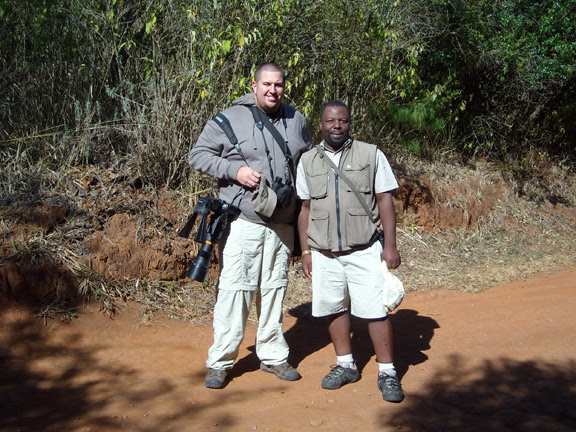 Me with our guide for the morning David


We had a long drive with a few stops ahead of us, so very shortly after, we were on our way...

These birdies are incredible.Very much enjoying your posts.

Trogons and Turacos!!! How amazing is that?

Knysna Turaco...... just love it. I had 4 outside our Tree top chalet at Garden Of Eden (Knysna) missed the Trogon though.

@Susan: Thanks! Glad you're enjoying!

@Dave: They're incredible birds--their song is awful, but it makes them easy to track down!