After the early morning birding at Kurisa Moya, we ate a quick breakfast at our cabin before packing the car and  and ditching the mountains for lower elevations and warmer temps.  Before we left, David had explained that about 25 minutes away we could find several species of birds that are typically found further west--in areas like the Kalahari.  The species were likely previously unknown from the area--so how could we pass up stopping to look? 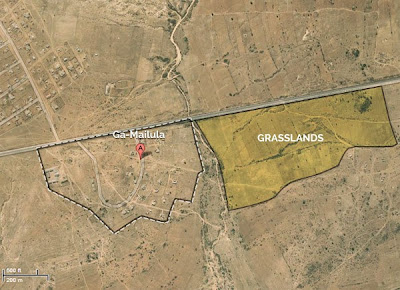 The directions to get there seemed simple-drive 25 minutes, once you pass the hill on the right, then you pass a school--if you come to a 2nd school, you’ve gone too far.  Easy enough right?  Well we missed the turnoff the first pass through because the area was described as a grassland--it was technically, but it was extremely small.  If you didn’t know there was something worth looking for there--you would never stop.  The area was in a village called Ga-Mailula, and thus I dubbed the small patch of thickets, grass and scrubs as Ga-Mailula Grasslands in eBird.

Ga-Mailula Village beyond Grasslands and Aloes

After back tracking and finding the dirt road that wandered off towards the outskirts of the village we pulled onto it, and almost immediately off the road in front of us flushed our target bird--a SPIKE-HEELED LARK.

That was too easy…  As we walked the road stuff started popping up on bushes nearby. A flock of SCALY-FEATHERED WEAVERS showed up--another species unexpected for the area.

As we watched something flying off in the distance a bird on top of an acacia caught my eye.  It looked like a robin or thrush and after getting some bad pictures it was indeed yet another one of the west species--a KALAHARI SCRUB-ROBIN.

We continued down the road and quickly came on a flock of sparrow-like birds on the ground--another lifer and unexpected find here--WHITE-BROWED SPARROW-WEAVERS.  This little patch of grass was incredible.

In the distance an ACACIA PIED-BARBET called, whilst Laughing Doves cooed, and the sparrow-weavers made a racket.  After driving the short stretch we turned to head back to the main road when Bert spotted a prinia in a nearby tree--only this was a BLACK-CHESTED PRINIA--yep another unknown from the area.

As we got back to the road a CATTLE EGRET flew in and landed with a few cows--I couldn’t resist a photo.

We drove a couple hundred yards when I spotted a small falcon/kestrel perched on a telephone phone.  After we flipped a u-turn to go see what it was we found ourselves looking at another unknown from the area--a GREATER KESTREL.  Ga-Mailula had turned out to be an amazing stop and turned out 7 life birds in less than 30 minutes.

We hopped back on the highway and started making our way back towards Pretoria and our final destination for the day--Sandton in Johannesburg.  It was mostly just driving, as we had a long way to go.  Mid-afternoon we did make one last stop to look for birds at Nylsvley Nature Reserve.  We had missed most of the waterfowl possible so this would be our chance to change that--except that when we arrived we found out the ponds were all but dry.

Entrance to the Ponds at Nylsvley

We still opted to check it out to see what we could find.  We drove into an area with 2 viewing blinds and ponds--the ponds were 98% dry so waterbirds were present but few.  Right where we parked I could see a couple AFRICAN STONECHATS out in the reeds.  I flushed a cisticola near the road and soon found the gorgeous little bird--a TINKLING CISTICOLA perched out on a wire.

We walked out to one of the blinds, where there wasn’t a lot to look at.  In the distance a COMMON OSTRICH roamed with a few antelope.  A few plovers, jacanas, and herons wandered in the fields, and a couple PEARL-BREASTED SWALLOWS flew around.

We could hear an ORANGE-THROATED LONGCLAW calling behind us in the grass somewhere, but never got eyes on this good-looking bird.  A BLACK-SHOULDERED KITE coursed over the fields, as did a high flying back-lit LILAC-BREASTED ROLLER which looked pretty cool.

Driving back towards the highway we ended up in between two large patches of trees, where there was quite a bit of activity.  A BROWN-HOODED KINGFISHER was hunting back and forth across the road.  A number of small birds flitted about in the trees.  One of the first ones that popped out was an apparent SPOTTED FLYCATCHER--fairly early for southern Africa.

Bert spotted a tiny wren that didn’t intend to give us good looks--a MIOMBO WREN-WARBLER.  We had one other the previous week, but this was a better--yet not perfect view.

Miombo Wren-Warbler skulking through the trees

Sam asked from the backseat what the red bird was--when we finally found it in our binoculars it was a gorgeous CRIMSON-BREASTED GONOLEK, similar to a bushshrike, this bird was red below, and black and white above.  A striking bird and the only one of the trip.

We were soon back on the road winding our way into civilization.  The wildlife viewing and birding soon turned into seeing the landscape turn to shanty-towns, and then cities.  Bert provided some great conversation as we made our way into town.  We talked about politics, life in South Africa, and a variety of other things as we made our way into Sandton.  We got a little lost trying to find our way, but eventually we arrived in a high-walled neighborhood--where the walls were topped with razor wire, and each gate had video cameras.  Some streets even had their own secondary security to the private security at each house.  I asked Bert why so much security.  His reply, “paranoia”.

In any event, we pulled into the Ashdown House drive--our home away from home for the next 2 nights.  We checked in, got our bags out of the car, and said our goodbyes and extreme thanks to Bert.  He had been an exceptional guide, and undoubtedly was the reason we saw so many species of animals and birds during our first week in Africa.

We ordered dinner, cleaned up, repacked a few things then crashed for the night.  The following morning we had breakfast while CRESTED BARBETS rattled from the Garden and KAROO THRUSHES hopped along the pool edge and exterior walls.

Karoo Thrush hopping around the garden at Ashdown House

There were plenty of birds even here in the middle of the city.  EGYPTIAN GEESE and both AFRICAN SACRED and HADEDA IBIS would occasionally flyover, whilst a variety of doves passed, and the occasional SPECKLED MOUSEBIRD worked through the trees.  After breakfast a driver picked us up to visit the Cradle of Humankind UNESCO World Heritage Site--this is basically where we all came from millions of years ago (at least for those of us who recognize evolution).

Yep, somewhere down the line this is your ancestor.

The ride there took about an hour, and as we neared I spotted an all black raptor with a shaggy crest perched in a tree.  I told the driver he had to go back--I knew this was a new bird but wasn’t sure what kind.  Once we got back I pulled my telephoto form my bag which I brought just in case I saw some birds.  Once I looked closely I figured the bird was a LONG-CRESTED EAGLE.  Later upon checking the book it showed this was actually a vagrant in central South Africa.  The species is known to wander some so although unexpected it does show up from time to time.

The first stop at the Cradle was the Sterkfontein Caves portion where you actually go into the caves, squeeze through a couple tight crevices, and learn about what was found here, and the ongoing research, etc.  It’s definitely worth going if you are in JoBurg, just to say you’ve been, plus its a very important piece of human history--so if you care at all about that I say go.

Me in the Sterkfontein Caves

After the caves we headed to the Maropeng Museum a few kilometers away, which is the 2nd portion of the site.  Here you basically get a history lesson about the world, and human evolution.  It’s a modern building with some interesting exhibits in the time.  It is definitely heavily targeted at school children though so we didn’t spend a great deal of time here.

Maropeng Museum from the front

Overall the birding in the outdoor areas here wasn’t too great.  It was a warm day when we visited so some things may not have been very active.  After visiting we headed back to Johannesburg and spent the remainder of the day just relaxing at the guest house.  We probably had time to do some more sightseeing but just used the time to enjoy not being cooped up in an office, or having to do a single thing.

The next day we would leave Johannesburg for Cape Town, and a completely different side of Africa.  Our trip was more than half over and seemed to be coming to an end far too quickly.