After a fantastic nights sleep at Bushbuck, we woke and had breakfast.  Alan told me the VERREAUX'S EAGLE-OWLS were perched in the open if I wanted to get a photo--I did.  So he walked with me across the yard and pointed out their location.  Both birds were in the trees but only one was really visible.  I took a few shots, but the birds were still pretty distant so... 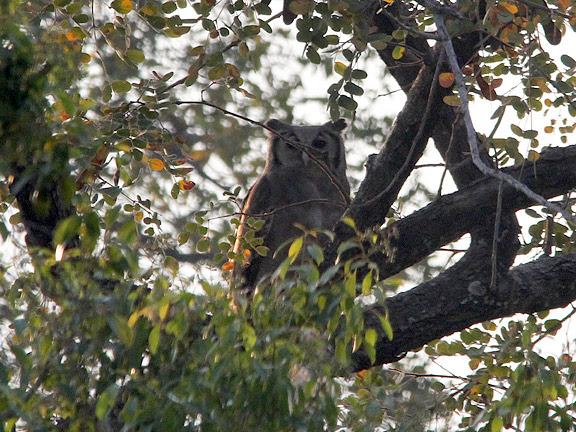 After, we were taken into Livingstone by Oriel (owner of Bushbuck).  Today we were going to tour both sides of Victoria Falls, and take a sunset wildlife viewing boat trip on the Zambezi River.  There wasn't a whole lot of birding that happened in our time at the falls.  We hooked up with our first guide for the day in town and he took us into the National Park on the Zambian side of the border. 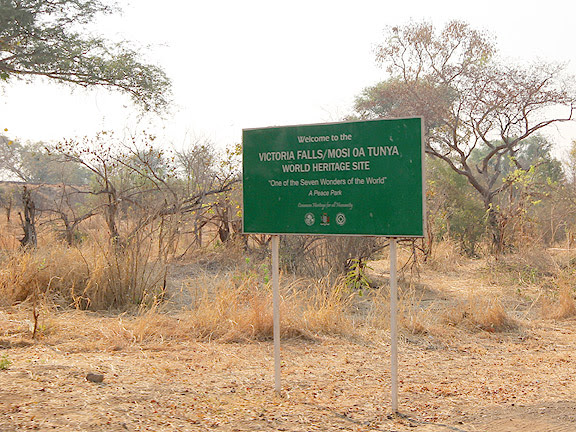 We basically had a quick walk through tour of the park and viewpoints with commentary about the falls from a Zambian point of view.  The guide had a strict schedule to adhere to apparently, and several times left me standing looking at birds as he tried to keep to his time-table.  The Zambia/Zimbabwe/Botswana portion of our trip was riddled with these types of guides/experiences, and it was a little disappointing--but our own fault for not doing more research on how these guided tours were.  We thought because it was private, we would be able to go at our own pace, but that wasn't the case. 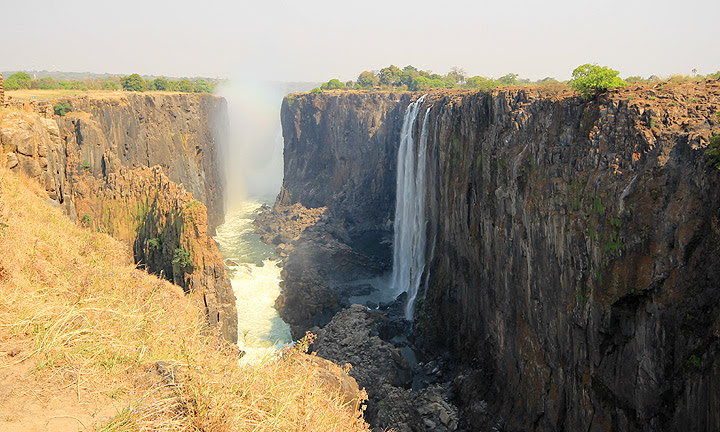 We did enjoy stunning views of the falls because it was low water.  You could basically see the entire chasm below the falls and didn't have to worry about the mist too much--as there was very little.  There were a few birds, but overall it seemed eerily quiet aside from the roar of the water spilling over the cliffs.  It wasn't until later that I realized I didn't photograph really any birds on the Zambian side--except for one tree full of TRUMPETER HORNBILLS in the gorge below the falls--I didn't know it at the time, but these would be the only photos I took of the species. 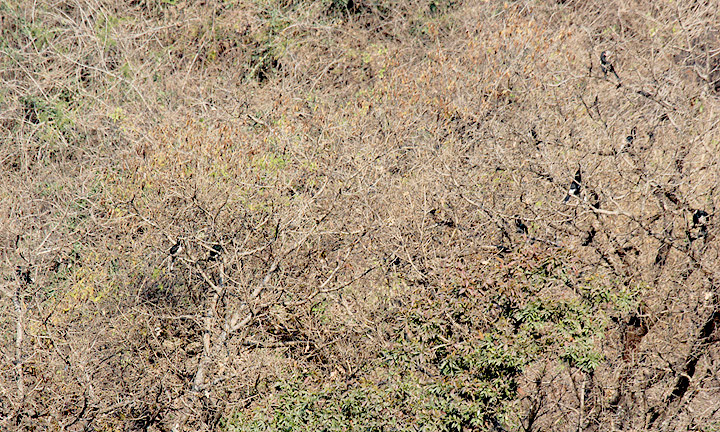 How many Trumpeter Hornbills can you see?
(hint, there are at least 7)

The few birds that were there were very skittish, or distant.  One of the more interesting sightings was a COMMON SANDPIPER in a small puddle on the cliffs below the falls, about halfway to the river below. Several species of Swifts and Swallows circled out over the gorge--there were likely hundreds, but I only counted the few that flew close enough to identify like BAT-LIKE SPINETAIL and ROCK MARTIN.  Mostly though this part of the trip was to enjoy the falls. 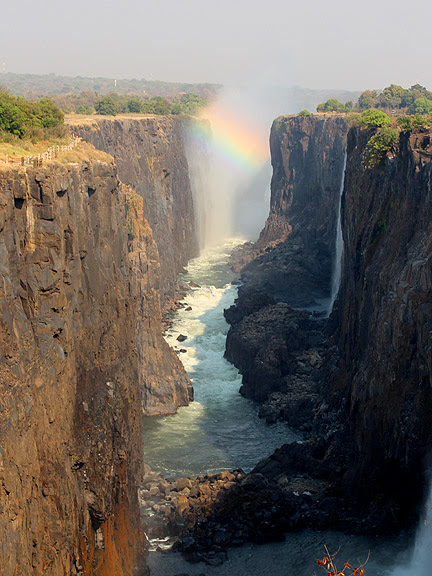 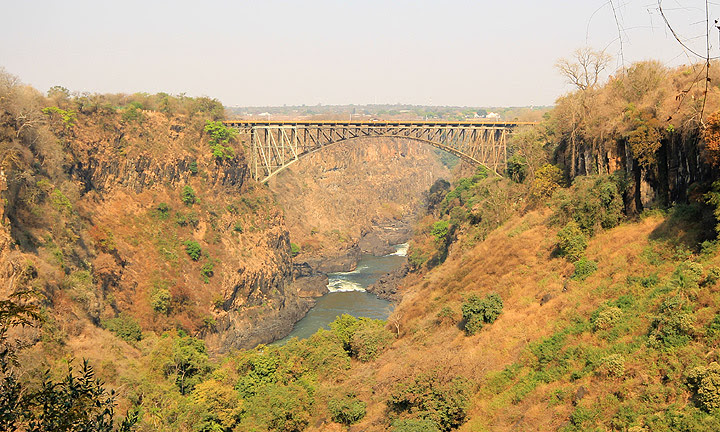 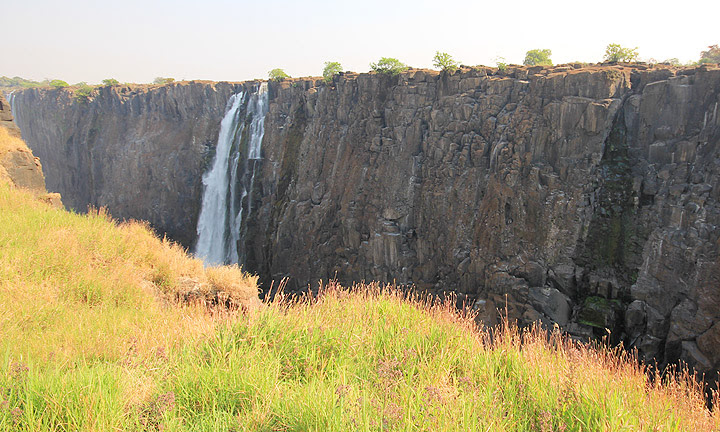 Victoria Falls shots from the Zambia side 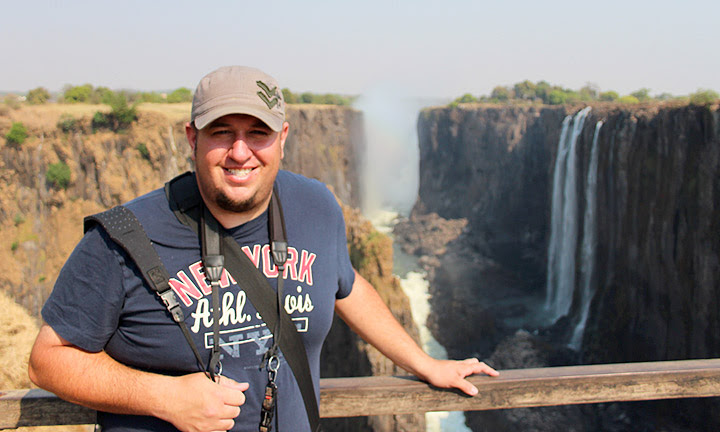 Me with Victoria Falls in the background

After what was only about an hour the guide rushed us to the border, and through customs and across the Victoria Falls Bridge to the Zimbabwe side.  There we passed through Zimbabwe customs and were handed off to another guide for the same company--but one with a Zimbabwe point of view on everything.  And just like before we were rushed… 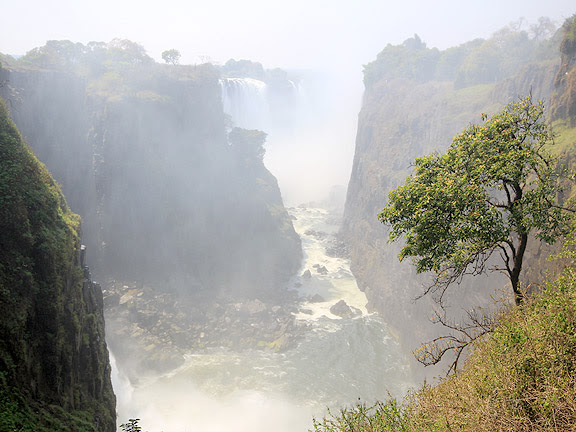 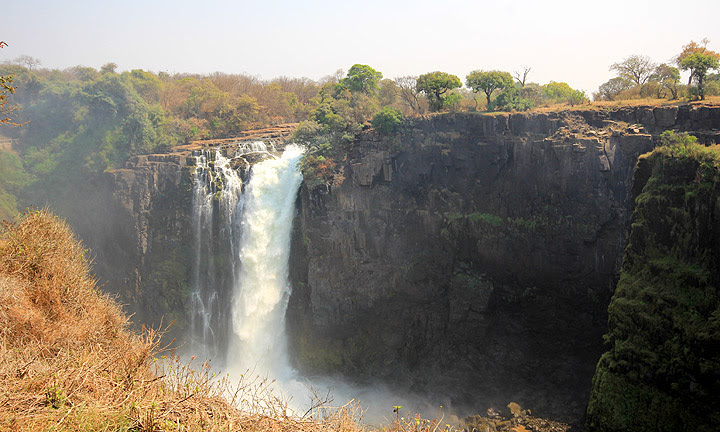 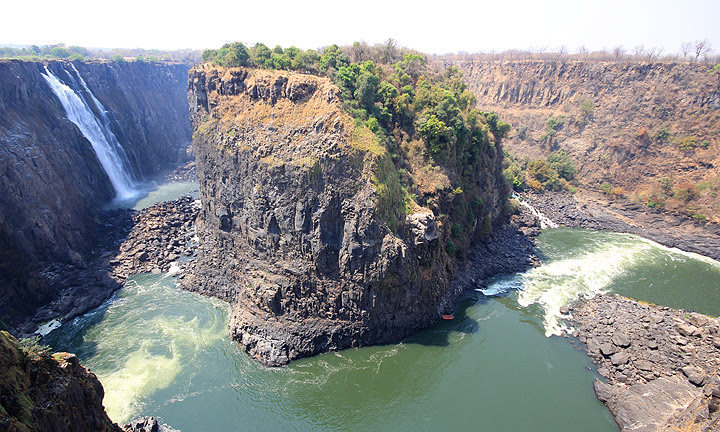 Victoria Falls shots from the Zimbabwe side

Into the park around the trails, and all the viewpoints.  And like before I tried my best to slow him down--stopping to check out a bird here and there--one of which were ROCK-LOVING CISTICOLA near the viewpoint of the bridge.  But the most memorable bird here was a circling VERREAUX'S EAGLE in the gorge below the bridge.  It circled 4 or 5 times before flying off down river and out of sight. 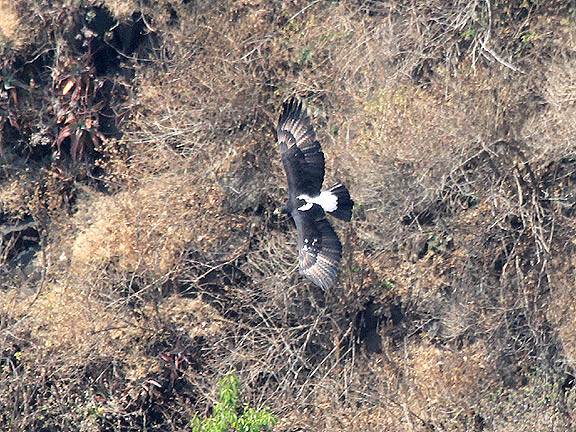 Verreaux's Eagle soaring in the gorge

After getting back to the car we headed to the Victoria Falls Hotel where our guide dropped us off for a 2 hour break--and lunch.  Lunch was good, if not overpriced--tailored to rich American and Europeans who want to be waited on and treated like the upper class.  I felt much more in my element at Bushbuck and was glad we didn't stay in one of these relics of the 1920's that are quite popular among tourists. 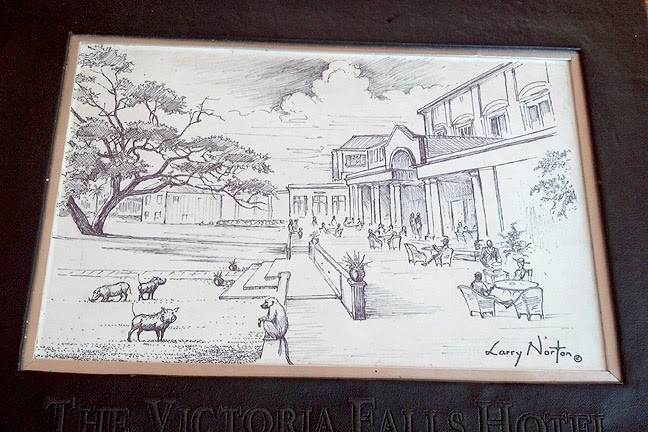 After lunch our guide picked us up, took us back to the border, and we made our way back into Zambia, where our guide from the morning picked us up and took us to a drop off for our boat ride.  We had about 2 hours to wait, but the pick-up/drop-off area had wicker chairs with cushions in the shade, so we just sat down and relaxed out of the sun--it was a hot afternoon and felt good to just relax.  Soon enough our ride came to take us to the boat--and everyone was on time and in the van to go except for 2 people.  They were about 30 minutes late, holding up everyone--and ironically they were two people staying at Bushbuck whom I had been pretty annoyed with the previous day.  They were your typical American tourist that paid big bucks to go cool places and didn't give a shit about anyone but themselves--I say typical because this is a perception of many Americans from foreigners I've met and talked with.  These two had decided to drink all afternoon and lost track of time--so because of that we lost 30 minutes off our boat ride, thanks ladies (sarcasm). 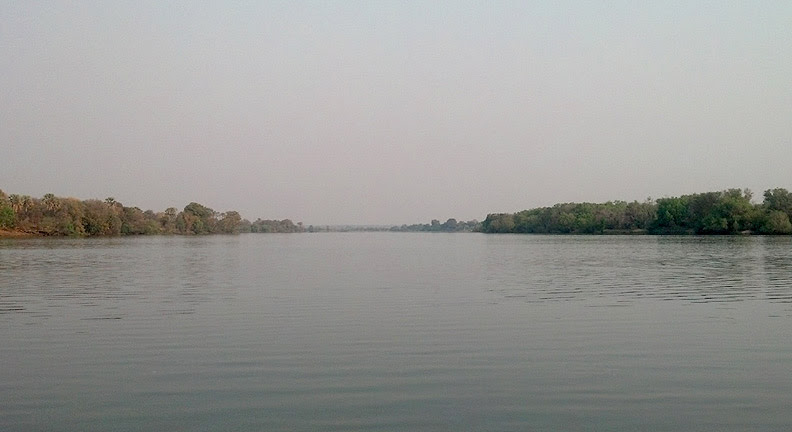 In any event we made it to the dock and loaded on the boat, which was still pretty touristy, stopping to ogle the Hippos with just ears and eyes poking out of the water. If you ever go to this area HIRE  A PRIVATE GUIDE ahead of time for both a tour of the falls area and the river.  Or tour the falls on your own--you don't really need a guide, it just made crossing the border quick and easy--plus provided transportation.  If you cross on foot you will be inundated with requests to buy this, or that from the dozens of people hocking souvenirs on the streets.  I ended up picking up about $150,000,000,000,000 Zimbabwean Dollars from a kid at the border for $20--roughly $2 per bill I snagged.  The money is worthless but an interesting part of history.

In any event--private guides--basically it would be worth it to pay and have someone take you on the river without the rest of the group--so you can take the time you want to look at the wildlife you want.  The groups focus on the big stuff, but did stop for some birds, like these overly cooperative WHITE-FRONTED BEE-EATERS. 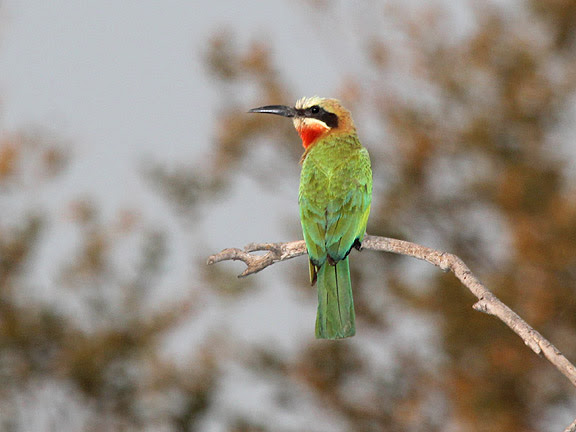 Most of the birds however were just "drive-bys" and I had to make due with a quick snapshot here and there.  I picked up my lifer AFRICAN SKIMMER on a sandbar in the middle of the river--I was told they are endangered, but after getting home it appears they are near-threatened, with about 20,000 individuals remaining (in 2002)--still a good find near Livingstone. 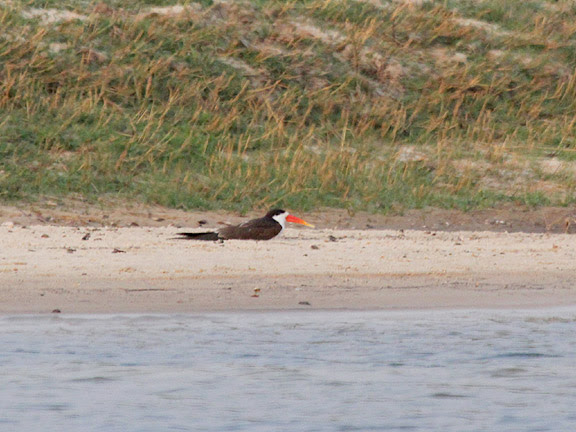 African Skimmer on the Zambezi River

We also had really good looks at a NILE MONITOR LIZARD while we floated along one of the shores.  There were a few crocodiles, and more hippos--that they focused the ride on--but aside from that there was very little big game. 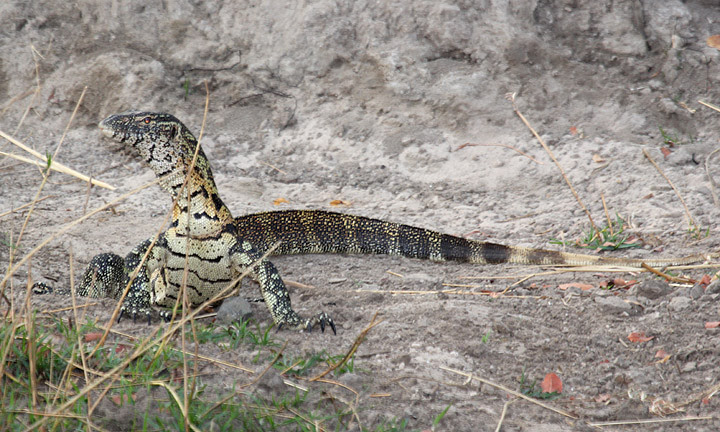 Nile Monitor along the Zambian side of the Zambezi River

We ended up on an island in the middle of the river right at sunset which like the night before was incredible.  I snapped a few shots while others were on the island having drinks and eating snacks that were provided by the tour--that were probably hot when we left the dock, but cold by the time they offered them up--I passed. 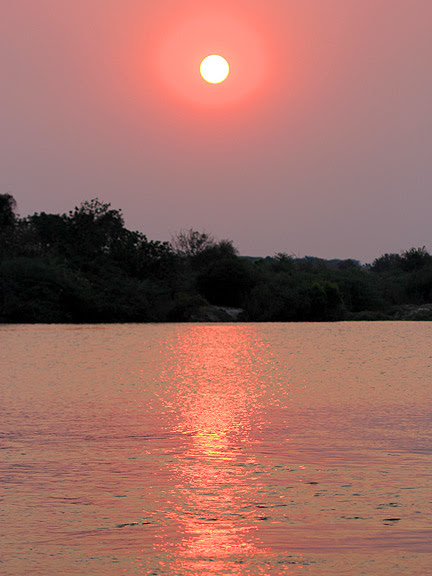 Sunset on the Zambezi River

Looking back the day was a little fast paced for my liking.  If I were to have a chance to go back, I would spend more time here, and probably take a day on each side of the border at my own pace--and like I mentioned hire a private boat for the river.

Back at the dock Alan was waiting and loaded us into a cab to take us back to the lodge--he had to wait on other and would follow us back in his vehicle.  On the highway back to the lodge, we pass through a National Park, and the security forces there gave our cab driver a hard time as we passed through.  We didn't have any issues when we were with Alan or Oriel on our other 3 passes through the border--but the local cabbie was an easy target for them I guess.  Finally we made it back to the lodge for dinner and another great night sleep--the next day we were headed to Botswana, for our last full day in Africa...

photos from the Victoria Falls in Zambia:
http://www.timaverybirding.com/photos/thumbnails.php?album=1118

photos from the Victoria Falls in Zimbabwe:
http://www.timaverybirding.com/photos/thumbnails.php?album=1123

photos from the Zambezi River:
http://www.timaverybirding.com/photos/thumbnails.php?album=1130