About two weeks ago, I went out on a nighttime trip with the Swaner Nature Center, searching for a Flamulated Owl. It was successful in many ways. I saw the owl (a new life bird). I met a couple of Summit County birders, who I have since gone birding with. And finally, I met Markus Mika, from HawkWatch International.

I followed up on Markus's offer to go out for a day with their owl researchers. This morning, I drove out to Huntsville Utah and met William, a summer employee, and Bryce, a more serious and useful volunteer than myself. We drove to Eden, then a bit further, then on a back road, then on a winding dirt road, and finally parked before our mile+ hike. The location of the owls is safely locked away in my lack of memory. 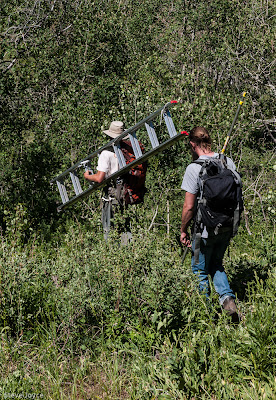 Because I was the old, visiting guy, they didn't make me carry the ladder during the day.

The owl nests we were hunting for were boxes put in trees 10 years ago.  They hadn't been checked since, but we did have a good hand-drawn map.  William and Bryce had been up last week checking the first 20 boxes and had found one nest of Flammulated Owls, which was the topic of this research project. It had four eggs in it, so our first stop was to see if any had hatched.

The trick to this owl work is to catch mom napping in the nest box during the day.  Dad is around somewhere and brings food at night, but doesn't hang around the box.  The first step is to sneak very, very quietly up on the nest with a long pole with a hat at the end. Before mom wakes up to look around, you poke the hat in the hole (entry way) so she can't leave.  Want some owl irony?  The hat was from Hooters. Here we have William waiting for step 2. 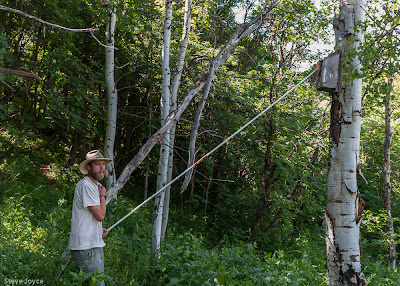 With the hat firmly in the hole, you prop the ladder against the tree, climb up, and for safety's sake, tie the ladder to the tree.  It turns out that squirrels, including flying squirrels, like these nests and may come popping out when you open the top.  No sense falling from 12 feet from a squirrel startle. Bryce is about to go grasping for owls. 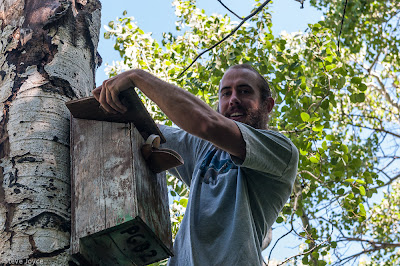 Reach into the nesting box and out comes a Flammulated Owl.  This is a full grown female. Once she realizes she isn't making a quick escape, she just hangs out peacefully. 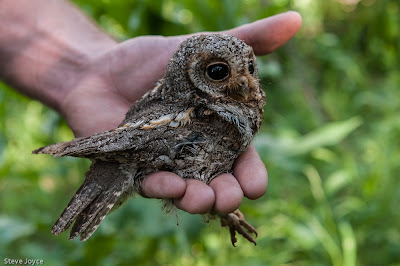 That's a good thing, because one of the first things we did was set her in a bag to weigh her. Even full grown, they only weigh about 2 ounces. 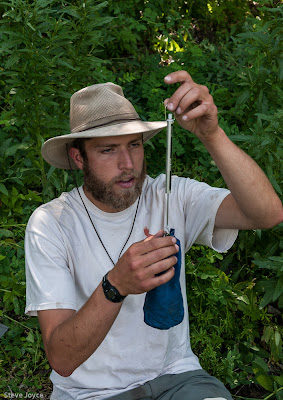 We leave her resting in her little bag and get the owlets. Last week they had found 4 eggs in this nest.  Two had hatched, but the other two were unlikely to. 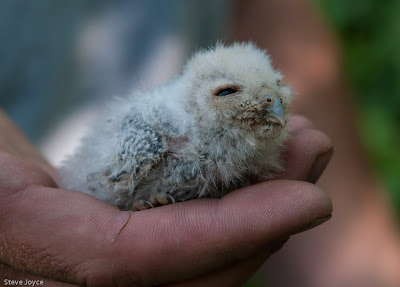 Like their mom, they get measured and weighed.  This is a very cautious, careful job. 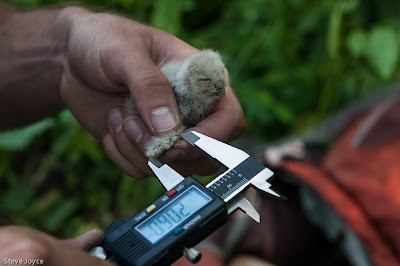 Remember decorating Easter eggs when you were a child?  Well, somehow the researchers need to distinguish between the owlets on future visits.  The answer?  Sharpies!  I am not sure the marker company will ever use this in their ads, but a Sharpie works well on little owls. 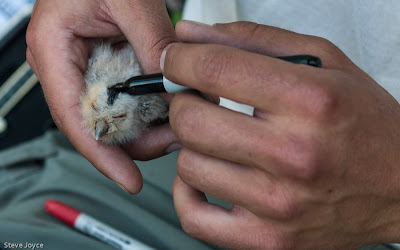 Now, styling a black mohawk, he is returned to a hand with his nest mate. 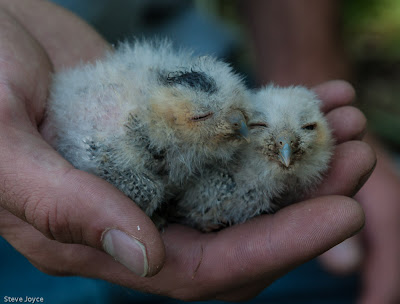 We also stopped by and did a quick visit with a Saw-whet owl. Since this isn't the topic of their research, we stopped just long enough for me to get a picture.  Notice the dramatic difference between the Saw-whet's eyes and the Flammulated's. I think the Saw-whet's look more like Jasper's when he is waiting for you to toss a ball. 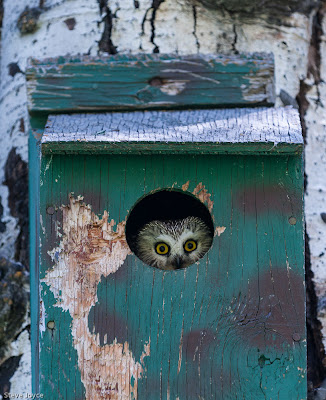 As we were pounding through the forest looking for nest boxes, Bryce found this intact skull, which we were fairly certain was a moose.  He didn't find the rest of the skeleton. 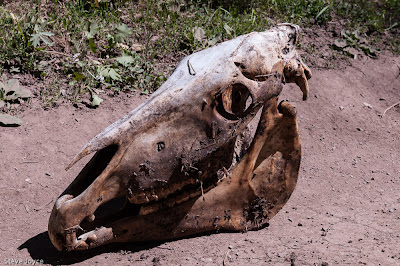 Of the eight nesting boxes we were trying to find:

--Two were lost
--Three had missing covers, so no animal would use them
--One had become a squirrel nest
--Two had Flammulated owl nests. One had three eggs yet to be hatched and one had four nestlings.  You normally have 2 or 3, so finding one with 4 live, happy nestlings was a good find.

I am so used to thinking about owls the size or Great Horned, Barred or Barn.  Seeing owls that look the same, but are shrunk down to a handful is just incredible. 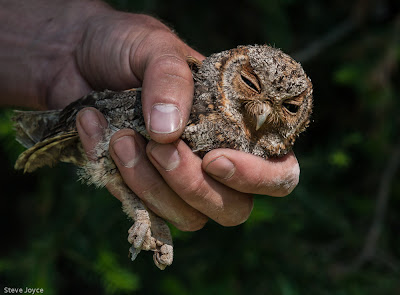 Here is the smallest of the four nestlings.  He only weighed 7 grams, about 1/4 of an ounce.  His little eyes weren't open yet. 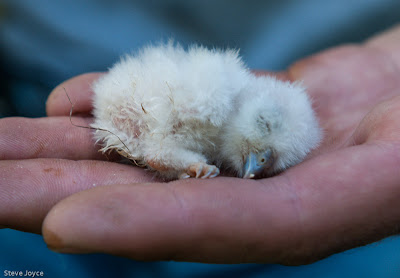 While he was being weighed and measured, his three nest mates were relaxing.  Of course, they had already been measured and had met Mr. Sharpie.  May I introduce Black, Blue and Red. The littlest guy was lucky.  He got to remain clear. 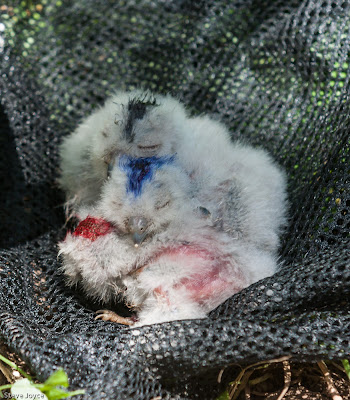 This isn't a great video but demonstrates the funniest thing I saw all day.  When you have an owl in your hand, they either play dead or just start napping.  Even then, they seem to have a non-stop stability system for their head that rivals any camera system.  Watch her head as Bryce moves his hand around.

A huge thanks to HawkWatch and Markus for letting me tag along on a day of owl work.  And thanks to William and Bryce who put up with my endless questions. It was truly a memorable experience. Finding two more nests meant a successful day and now they have more of the boxes GPS-tagged for future visits. 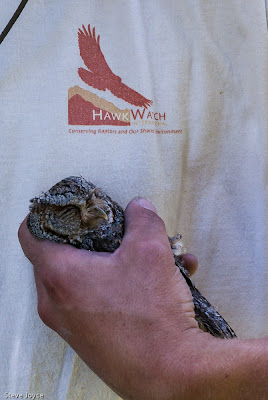 Do you have an idea for a guest blog post? Submit your idea for a blog post by clicking the button below:

@Steve: Great Post and awesome photos, and thanks for sharing it on the Birders Blog! I just noticed that one of our former guest bloggers (Bryce) is in your post!

One of my favorite lines you said, "I am so used to thinking about owls the size or Great Horned, Barred or Barn." This is something I always try to stress when I take people to look for Flammulated Owls. Despite having so many small owls, most people immediately think "Great Horned", when they envision an owl. It's hard to take that vision or idea and shape it into a tiny 6-7" tall (Tanager Sized) Owl.

Fascinating. I have never seen a Flammulated Owl before, and seeing it in the palm of someones hand is so different than in a book. It's amazing how tiny these creatures are. Thanks for sharing this great story.

Great post Steve. It was really great to spend the day with you. Hope to see you around soon, maybe on a ridge checking out the hawk migration! And maybe guest posting again. I among others would certainly enjoy that.

Great story and pics Steve....thank you for sharing!!

I love the owl....really love it..
thanks a lot for showing it to me...keep it up...
natural gas compressor