Wednesday morning, Rachel LeBlanc and I hiked up North Canyon Trail in search of Ruffed or Dusky Grouse, or just a good adventure.  We needed our birding fix! And we were not disappointed, as the trail was incredibly birdy.  The great part about North Canyon Trail is that not many people know about it. We only saw a handful of people, unlike Mueller Park Trail, where you have to constantly be on guard for cyclists whizzing down the hill.

North Canyon Trail starts in Bountiful, and the end of Canyon Creek Drive. It actually makes a 13 mile loop up to a lookout called Rudy's Flat (at 4 mi), down to Elephant Rock (aka Big Rock) and then down to Mueller Park. We didn't do the full loop as we only had three hours for our journey.

At the end of Cave Creek Drive, the pavement ends and a dirt road begins. I suggest parking at the end of the pavement and walking the dirt road, as the dirt road is highly rutted. It runs for about a mile and then the trailhead begins.  The road is very rocky and kind of hard to walk on, but it was worth it. There were birds everywhere. Today we only got about a mile in to the actual trail because every step we took there was another bird to see.

The highlight of the morning was just the sheer volume of Swainson's Thrushes.  They were everywhere. We started laughing because we'd see a bird on the trail--holding our breaths we'd look to see what it was. Every time it was a Swainson's Thrush.  If you'd like to enjoy the ethereal song of this bird and study all of its different calls, this is the place to go.  Our conservative count over the 2 miles was 17 individuals.

FOX SPARROWS were also omnipresent, with almost as many singing as there were thrushes.  We enjoyed the bright colors of a couple pairs of BLACK-HEADED GROSBEAKS and had fun watching MACGILLIVRAY'S WARBLERS, including those we suspected to be recently fledged, all along the trail.  It gave us both some good photo opportunities. There were also several CORDILLERAN FLYCATCHERS singing their cheerful high-pitched dee--whip!  One posed for us on the way up, and we found him in the exact same place on the way back down. 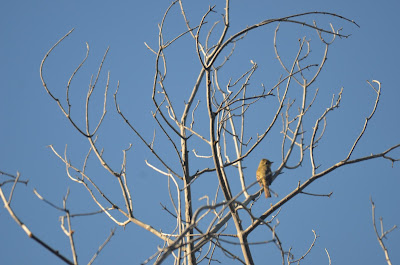 We ran in to a few RED-BREASTED NUTHATCHES up in the higher elevations. 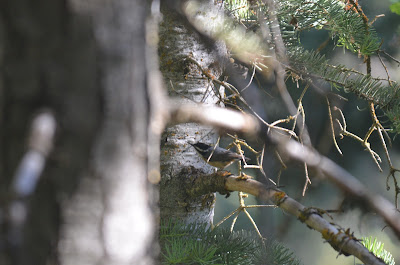 And also had some in-your-face looks at WESTERN TANAGERS. Up at the top where we stopped to enjoy the view and turn around, a flock of CASSIN'S FINCHES flew overhead. While we hadn't rustled up any grouse, we stopped and enjoyed the view and made plans to come back up to this beautiful place. It was hard to turn around and leave. 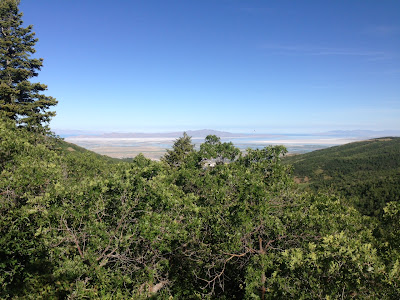 View from the top

On the way back down, Rachel picked up on a PLUMBEOUS VIREO singing away in the trees.  That was a nice surprise for me, as I had never found one around here.

Other than dealing with the rocks on the road, the trail is fairly easy, with a mild ascent and switchbacks.  I'd consider it to be a moderate trail because of the elevation gain.  The trail is shaded most of the way with changes in habitat from scrub oak/maple to conifer forest. If you're interested in going, e-mail me if you need further directions.  I'm also considering leading a field trip up there, so if you're interested in going as a group, let me know! Maybe we can plan a little longer hike, get in to the higher elevations and rustle up some grouse. I have run on to grouse before on this trail, however, it was a few years ago before I was a birder, so I don't know if they were Dusky or Ruffed.  There seems to be a healthy population of both in the general area.

Nice post. Thanks again for a great hike in the "cool of the shade".

Great report. My trips into the area have yielded similar results... birds everywhere! (Of course birds are everywhere; it's Bountiful.)