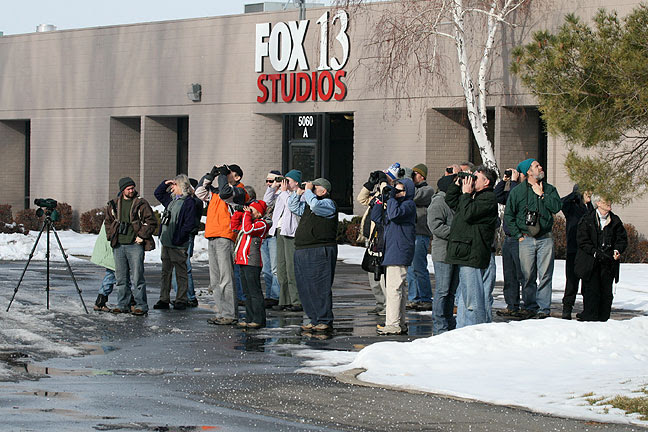 The "Gullstravaganza" Party. Copyright Tim Avery
This morning 24 birders (including me) ventured into the soupy Salt Lake Valley to look for gulls. Our first stop at Decker Lake rewarded us with 4 species. The expected California, Ring-billed, and Herring gull were all picked up here, as well as a beautiful 3rd winter LESSER BLACK-BACKED GULL that everyone was able to see before we left. 2 HOODED MERGANSER, along, with 7 Long-billed Dowitchers were nice additions here as well.

Moving on to Lake Park it was mostly pretty desolate. Very few geese were around and nothing out of the ordinary. A Common Goldeneye on one pond along with several Common Merganser on the Fishing Pond were added to the day list—and all 3 common gull species were seen, but only a few individuals.

Our next stop was Lee Kay Ponds which as it often can be was miss—instead of hit. No gulls on the ice was a disappointment, but a fly over Bald Eagle provided great looks for everyone. Talking to a landfill employee we were told that the gulls were all up on top of the landfill—we decided to move on and come back later seeing if anything changed.

After the caravan of cars made their way up 7200 west, we hit the North Temple Frontage Road that runs west to Great Salt Lake State Park. Just past the Lees Creek flow on the south end of the Inland Sea Shorebird Reserve we spotted a flock of gulls from the frontage road. When I looked through my binoculars I saw a pale gull with a black bill and got really excited. After putting my scope on the bird I checked everything out and confirmed it was a 1st winter ICELAND GULL—most likely the same bird Carl Ingwell found at Great Salt Lake State Park this past week. Everyone in the group was able to set up scopes and get looks at the bird while it sat and roosted on the ice, along with the 3 common Utah winter gulls. 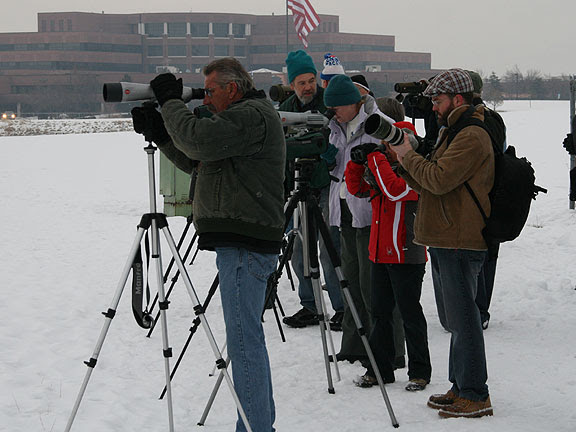 Taking in the Gulls. Copyright Tim Avery
The Iceland Gull has a storied past in Utah with much dispute over individuals being pure bred or hybrids—leading to very few submitted, and only 1 accepted record. There have however been at lest 6 reports in the last 2 years, signs that this species is now being identified more often than in the past. This is the 4th individual to be reported in Salt Lake County. More importantly than how rare this bird is, is how many people were able to see it for not only for their Utah list, but also for their life list. David Wheeler ticked it off for his state leading 392nd species in Utah, and the world traveled Barbara Watkins added it to her impressive 6,000+ species life list. 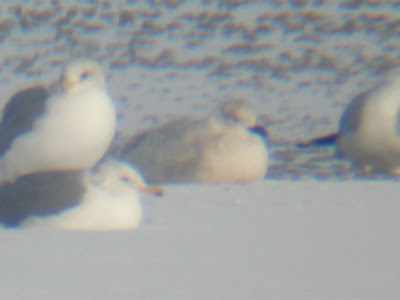 From here on a gull high we continued to Saltair and Great Salt Lake State Park where the highlight was a Killdeer—the last day of the duck hunt saw the shore lined with hunters, and birds were far and few between. We left the state park and traveled to the Salt Lake International Center where the entire group was treated to great looks a Great Horned Owl. We planned on going back to Lee Kay Ponds, but Steve and Cindy Sommerfeld went ahead and alerted us that there was nothing on the ice still—so instead we hopped on the freeway and drove north to Farmington Bay WMA.

In the lead car I caught a brief glimpse of a fly over “yellow-shafted” Northern Flicker just outside of the WMA on Glover Lane. At Farmington portions of the group were treated to looks at NORTHERN SHRIKE, and a surprise EARED GREBE with the Pied-billed Grebes. After scanning through the few gulls that were there with the strangest bird being a tiny “herring-esque” gull, we decided to call it a day. At the parking area at the end of the main dike as we were about to disembark someone heard a Virginia Rail. Piquing everyone’s interest we went to the edge of the marsh where within a couple minutes had 3-4 rails calling out. Eventually a couple jumped out of the reeds for people to see. To make things better several SORA soon appeared allowing for great photo opportunities for those with cameras, and great views for all. 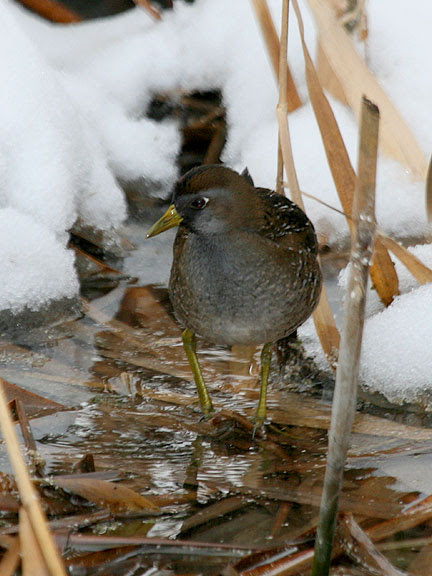 As everyone departed, myself, and a few others stopped to look at gulls on the way out. The same flock we scanned earlier had been joined by a few new individuals, including a 2nd winter LESSER BLACK-BACKED GULL, and 4 THAYER’S GULLS—a species we had missed in the morning. As we left a NORTHERN SHRIKE made an appearance at Egg Island.

At the ponds at the end of Glover Lane those who remained were treated to one of the coolest sightings of the day. A Merlin was being chased by a Prairie Falcon which for some time appeared to be chased by a Red-tailed Hawk. It was quite a sight to see the large falcon chase the smaller falcon across the sky and out of view. 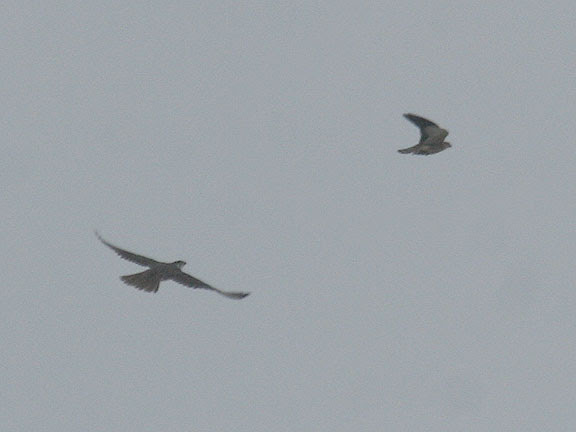 Prairie Falcon chasing a Merlin. Copyright Tim Avery
Deciding the gulling wasn’t enough for the day we headed to the Bountiful Landfill where there were a few gulls, but nothing out of the ordinary. A couple American Crow were the highlight at the dump. Making one last stop before heading home we swung by Bountiful Lake were Jeff Bilsky was able to turn up the NORTHERN MOCKINGBIRD he found the week before. As we enjoyed looks at this we looked back to the dump where several thousand gulls appeared to have poured in since we left—unfortunately I had to be back in Salt Lake, leaving those gulls for another day.

Thanks to everyone who joined me and Great Salt Lake for what was the third (now annual) South Shore Gulling trip that has been in the month following Christmas each of the past 3 years. Looks like we will have to plan something for next year that is bigger and better—after all Colorado has its annual “gullapalooza” so I guess we need to have our annual “gullstravaganza”.

What a great day....wish I was there.

I wish I'd been able to make it, but alas the world conspired against me. Everyone looks like they had a great day.

It was a really good day! The only thing missing was a couple mroe species of gulls. A Gluacous and a Mew sure would have rounded things out nicely! But all in all no complaints!