This morning as I sat in my home office watching the feeders as I do most mornings before I leave for work, I got to thinking about an ID issue from a few years back. A birder reported what they believed was a thrasher of some sort in St. George. They had a picture and a description and posed the question on one of the local listservs about the ID of the bird. They had taken the time to share the pictures with local “experts” before posting to the list, and the “consensus” was that the bird was a thrasher. When I opened the email I expected to see a thrasher and was flummoxed to see a Rock Wren. What blew me away at the time was how many people were positive that it was not a Rock Wren and that it was a thrasher.

Rock Wren and Sage Thrasher. That wren sure looks big in that photo.
Despite every detail of the bird, and the photos as proof, the observer claimed the bird in the field had been slightly smaller than a flicker. There were no other birds around, only the bird in the grass. Now as I said when I opened the picture I had no doubt as to what the bird was, and despite the obvious ID there were quite a few birders who just disagreed. In the end I gave up and said the bird is a definitely a Rock Wren, no ifs ands or buts—and laid it to rest. It wasn’t worth arguing over such a pedantic subject, and if others weren’t inclined to look at the evidence then I couldn’t change their mind.

Gambel's Qual and Greater Sage-Grouse. Which one is really bigger?

To the point of this post, the observer claimed the bird was slightly smaller than a flicker. Aside from the obvious field marks that made this bird a Rock Wren, the observers word on the size was the only thing that pointed to something different. This is highly problematic with bird identification and has caused more than a few fumbles on bird IDs. Size can be very difficult to judge in the field. Especially on a single bird sitting on a mud flat, or in the grass. When a bird is by itself and you are looking at it through a spotting scope, binoculars, or a camera, it often fills a large portion of the viewing area. It can give the impression that a Quail is the same size as a Grouse; or a warbler the same as an oriole.

Yellow Warbler and Bullock's Oriole. Same size right?
Size can be extremely helpful in IDing a bird but is only really useful when there is something to gauge the size against. There needs to be something measurable to make an ID judgment based off of size alone. While I was in California recently looking for Island Scrub-Jay it was noted that the jays are about 33% larger than their mainland counterparts. That’s a pretty big size difference—but in the field when looking at a pair through my binoculars, all that was apparent was that they were scrub-jays, and not that they were the size of a small magpie instead of the jays back home.

Island Scrub-Jay and Western Scrub-Jay. Which one is bigger?
The first time I ever led an owling trip specifically to look for Flammulated Owls I didn’t think it necessary to tell the group to look for a bird the size of a robin—so when the first owl appeared more than half the group of 20 or so birders didn’t see the bird. Afterwards I asked what they were looking for and was surprised that most were looking for something the size of a Great Horned Owl and hadn’t noticed the tiny bird sitting just a few feet away. I had assumed that most birders understood the size differences within species and hadn’t thought to explain the difference. Since then I have always started off by explaining that difference to get those participating in the mindset for what they are looking for. In this case it’s not a size judgment, but the actual knowledge of the size that led to issues. 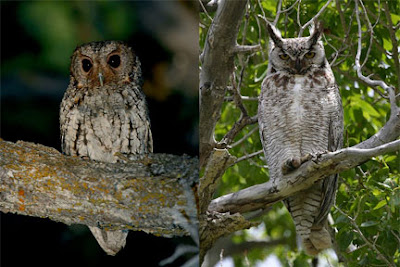 Flammulated Owl and Great Horned Owl. Aren't all owls the same size?
Knowing the size of certain types of birds and the sizes of things or other birds near them, helps in making some tougher ID calls. It can also help rule things out based on size alone. You will never see a Rock Wren that is the same size as a Sage Thrasher, or a Merlin that is the same size as a Broad-winged Hawk. I will follow this post up with a few tips and tricks I have used over the years to help gauge the size of a bird in the next week or so.

Awesome the way you posed the pictures to make all the birds look the same size side-by-side with species that have decent size differences. I have had this problem in the past when trying to ID a bird in my scope. I can see the bird, and I think I know what it is, but if there is nothing around to help me figure out the size I usually can't tell. Shorebirds really give me a hard time.

I can't tell you how many times people have sent me photos of Sharp-shinned Hawks convinced they were Cooper's because they thought it was too big for a Sharpie. Same thing with Cooper's, thinking the bird was "way too big, must be a Goshawk". And then telling me I'm crazy to say otherwise....size is very misleading at times, but useful at other times. This is not a plug, just relative...in "Hawks at a Distance" (which I just received printed copies of the other day) and "Hawks From Every Angle" I make a point of not having size tables in them, and stress that large birds (i.e eagles) generally appear slow moving and soar in wide circles as opposed to small birds (i.e. Sharp-shinneds and Kestrels) that show quick wing beats, soar in tighter circles, etc. Anyway, good post, and one I was going to do, but glad I didn't because I couldn't have done it better.