Base Reflectivity basically corresponds to the amount of radiation that is scattered or reflected back to the radar by whatever targets are located in the radar beam at a given location. These targets can be hydrometeors (snow, rain drops, hail, cloud drops or ice particles) or other targets (dust, smoke, birds, airplanes, insects).

The colors on the Base Reflectivity product correspond to the intensity of the radiation that was received by the radar antenna from a given location. 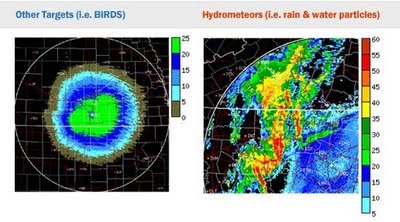 So how does this translate into numbers that make sense?

Other targets and hydrometeors show up in the same spectrum of reflectivity as one another. However, one key difference is the intensity at which they show up. To the left you can see the full spectrum of dBZ from -30 to 80.

Next to that are numbers for hydrometeors which show the actual millimeters per hour of precipitation in relation to the reflectivity.

To the right of that are the estimated number of birds per kilometer cubed. As you can see the non precipitation reflectivity is much lower on the scale and only go up to about 35 dBZ. Occasionally it does go higher, but that is rare.

In the radar images above, you can see the dBZ differences between the birds on the left, and the weather on the right. The radar image on the left is an example of a very nice night of migration around 25 dBZ in the center (the green area). This was taken on May 3 at around 10pm mountain time over the Oklahoma/Nebraska state line.

In my next post I will talk about why the radar image appears in a Donut shape, and about the velocity of the migrants.