As we approach the height of fall migration it isn't surprising to look at the national radar map and see blobs of green and blue all over the country--especially to the east of the Rockies.  I just screen captured the image below from about 10:30pm MT (so just after midnight on the east coast):

Even over the sparsely populated west you can see the radar sites are showing reflectivity--but nothing like what's  going on back east.  This is a fairly normal though, as we don't usually see anything like what happens over places like Chicago, St. Louis, Indianapolis, and the rest of those blobs you see above.

That being said, we are still not seeing the effects of any sizeable movement in northern Utah.  Small numbers of migrants are trickling through, but overall it's still lackluster.  I don't know what the next week or so holds; I had hoped a small front would be passing through this weekend and maybe bring some birds with it, but it doesn't look like much will be happening.

The best advice, just get out in the field and keep looking.  Eventually something will change and the birding will improve.  Even if you don't see lots of birds, fun stuff always turns up like this American Redstart from Garr Ranch on Monday: 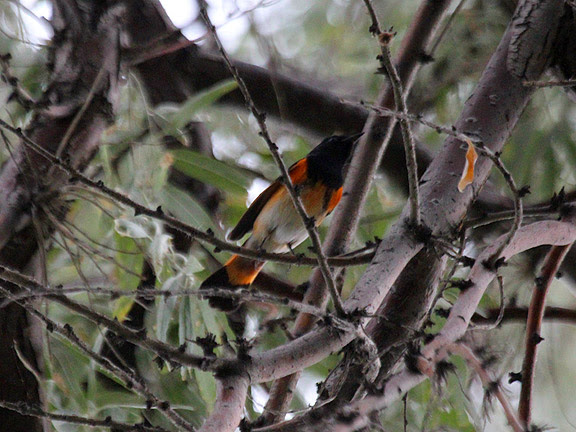 Why does it look like there are so many more birds migrating over the eastern half of the country than over the west?

There are a couple of reasons. One is that there are more radar sites creating more coverage. Another reason is the terrain--mostly flat and low elevation means the birds are found at the same elevations and a good cross section is picked up on radar. Third is that there are just more birds. There is a higher number of neotropical migrant species east of the Rockies. In turn there should be more individual birds, meaning more things migrating. Those are the reasons that come to mind right now, I am sure there are others as well.