Today was the 2nd annual Utah Birders Gullstravaganza and what a day it was.  The weather was terrible--I mean horrible--sleet, rain, and wind made it for a freezing 4 hours of birding.  6 species of gull put this on par with last years event, even though the viewing conditions were far form optimal--had the weather been better 2 more species probably would have been doable.  11 people braved the inclement weather--although initially 25 people signed up for the trip.  We started the morning at the ShopKo Parking lot in Sugarhouse with a flyover AMERICAN CROW.  From there we went to Decker Lake where the conditions were abysmal and there were few gulls.  We did of course get the token California and Ring-billed that are expected.  2 LONG-BILLED DOWITCHER remained (the 3rd possibly some raptors dinner) as well as plenty of waterfowl.  Geese were also noticeably absent here, as well as everywhere else we went today.

After getting out of the freezing rain we headed towards Lake Park after stopping so a few people could stock up on coffee to warm up.  There were a couple small flocks of Canada Geese here, the highlight being a flock along the road that had 10 CACKLING GEESE mixed in. There were 8 Richardson's and 2 Taverner's--everyone got excellent and extended look without even having to leave the vehicles.  At the pond on the west edge of the facility there was a Common Goldeneye and 3 Common Merganser.

We booked it over to Lee Kay Ponds where finally the gulls had arrived out on the ice with the back half of the main pond open.  There were maybe 800-1000 gulls present, including a handful of Herring Gulls.  On the first couple passes nothing else stood out and with the freezing rain still pelting us we were about to take off when several hundred more gulls came in from the dump and landed.  Scanning through the flock again we were rewarded with an adult LESSER BLACK-BACKED GULL in the midst of the flock.  After a little more looking a large pale brown and white gull popped up.  It took a while for the large beast to make its way out in the open where we could get good looks at the 1st winter GLAUCOUS-WINGED GULL.  A PEREGRINE FALCON and a flock of CANVASBACK were also nice additions for the day. 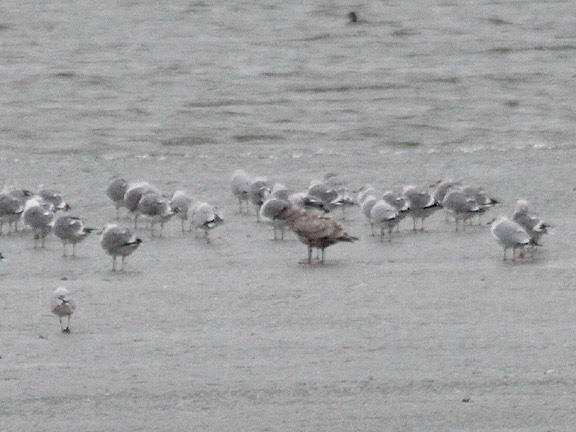 We drove the frontage road out to Saltair and didn't really see anything.  After hopping on I-80 and heading back east we took the 7200 West exit to take the Frontage Road to the International Center.  Just as we turned onto the frontage road a NORTHERN SHRIKE popped up and flew across the road perching for everyone to look at. 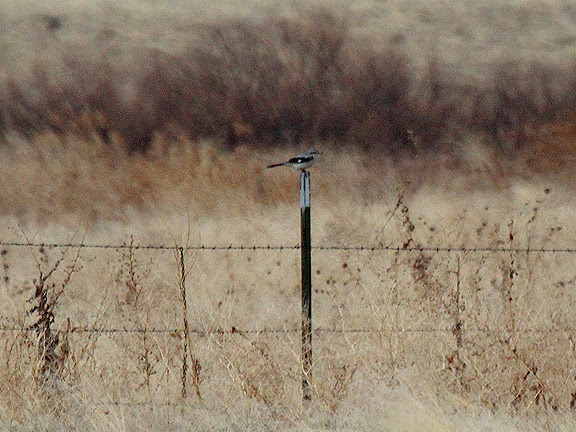 Northern Shrike near the International Center

The International Center didn't add anything for the day--no gulls on the south pond either.  We moved on to Farmington Bay WMA where a GREAT EGRET was just pass the entrance kiosk on the east side of the road.  Along west dike the birds were scarce--but when we got to the 4 way at the end of the road we could see plenty of gulls out in the southeast unit. 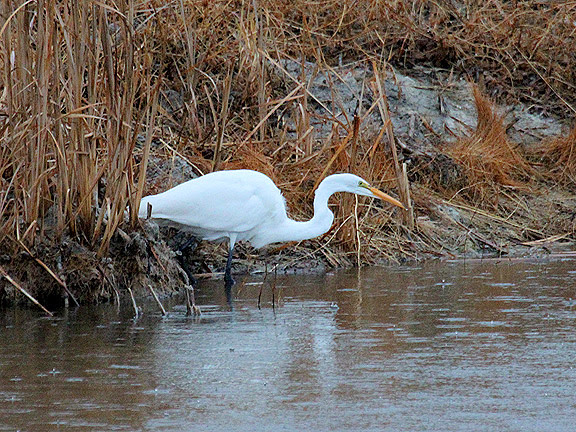 It looked promising but after spending almost 45 minutes scanning back and forth through the birds we only managed to pick out 2 THAYER'S GULLS. There were lots of gulls too far out to ID, so who knows what else was out there.  Of interest were the incredible concentration of the Herring Gulls here--I counted 146 (or 7) all on one small stretch of open water.  I figured with all the big gulls we would have picked up some other stuff here--but such is it with gulling.  We saw plenty of Bald Eagles on the ice, but had a major miss for the day in no Rough-legged Hawks.  And as usual saw plenty of Kestrels, including this cooperative guy inside the gate at Farmington... 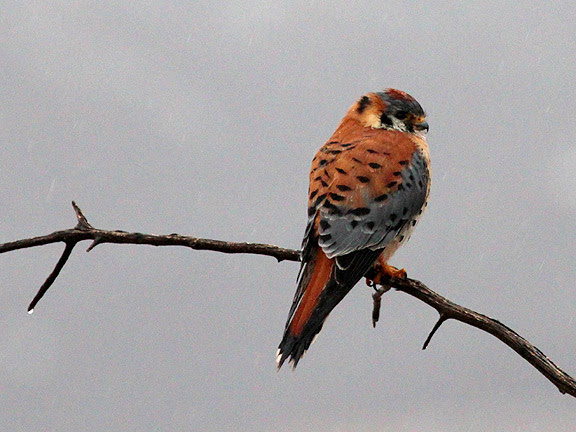 Just before 1 we called it a day.  Everyone was soaked and cold and the weather wasn't getting any better so it seemed like a good time to call it quits.  We saw California, Ring-billed, Herring, Thayer's, Lesser Black-backed, and Glaucous-winged Gulls on the day. I want to thank Norm and Gail Jenson, Oliver Hansen, Duane Smith, Amy Haran, Jim Brown, Stephanie Greenwood, Jeff Bilsky, Carl Ingwell, and Kenny Frisch for taking part in the day even though the weather sucked.  We will probably have another gull trip in the next month on short notice when we get some better weather.  For those who didn't make it today, you missed some great birding--and we hope to see you next time!

Thanks for a great trip everyone. Despite the rain, I think everyone enjoyed themselves. Nice to bird with the Salt Lake crew again. Thanks for letting some of us w/o scopes get some great looks. See you all again sometime soon.

@Oliver: glad you enjoyed! It was definitely fun despite the weather--the only thing that would have topped it would have been a couple more species of gull.

As a side note the following day I found a MEW GULL and a WESTERN GULL in Salt Lake County, which would have been the two we were hoping for!