When I sat down to come up with my Top 10 Species to see in Peru I was immediately struck by the fact that 10 was too limited.  By the time I reached Barbets and Toucans I was already at 12 species narrowed down from 100's of possibilities.  I hadn't even reached my Achilles heel in the Tanagers section.  I knew that my top 10 must instead be a top 25--endemics, wants, needs, everything and anything that make up the birds that will be the most sought after for me.

In Costa Rica I felt a Top 10 list was tough, but I came up with one.  They were prize birds--and by god were they hard to come by.  In the end I only saw 1 well; had fleeting glimpses with plenty of calling of another; and heard 1 more from the list.  I wondered if I had set the bar too high?  There were some specialties, an endangered species, a highly secretive species, habitat specialists, and restricted ranges on a number of birds.  For Peru I figured I would probably do the same and thus far the list is similar, with endemics, habitat specialists, rarities, and secretive birds.   I did however mix in some of the more common and still spectacular species I hope to find so that I hopefully have a better than 30% success rate. I have too have a list--there are just some birds I want to try harder for and seeing them adds a little something to my life. 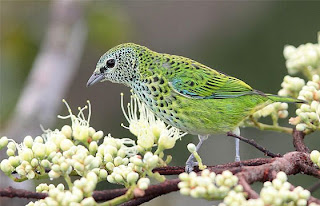 If you've followed the blog for the past year this bird may look familiar.  It is a close relative to the bird that was my #1 on the top 10 for Costa Rica--the Speckled Tanager.  I was fortunate to see Speckled only at a Zoo while there so missed out on my #1.  I knew that Spotted needed to make my list for Peru, but in terms of stunning tanagers it isn't quite as stunning as the others in my top 25.  None-the-less it is still a beautiful bird and I should have several opportunities to look for them at various locations from Machu Pichu to Amazonia. 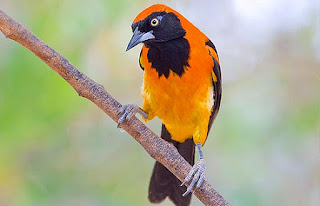 The Birds of Peru states the Troupial is a fairly common and unmistakable bird on rivers edges in Amazonia.  This striking icterid truly looks spectacular.  The orange and black is reminiscent of our Bullock's Oriole--the black mask and throat set against the rest of the head and body making it very memorable, and one I hopefully pickup in my short time in the Amazon. 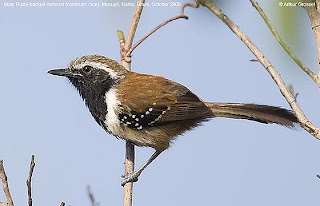 It's not an overly colorful bird--but the pattern is striking.  It is also only found in very small pockets across Peru making it a tough target species.  I should be spending a couple days where they are found near Cusco and might luck out with this one. 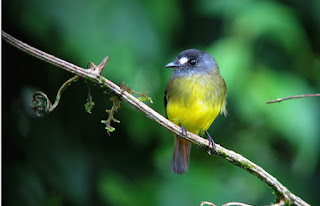 A "characteristic" bird of the east slope of the Andes.  The white spot in front of this birds eye caught my eye as I was roaming through the field guide.  Small flycatchers with big eyes and big heads like the Ornate remind me of our Least Flycatcher.  This safe pick should be a sure thing on this trip but also a bird I won't soon forget. 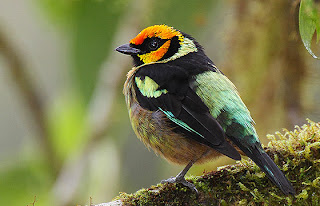 Five birds in and already another Tanager.  But I think the picture speaks for itself.  The name gets it right with the orange gradient face.  The black back and wings, and green-blue markings on the rest of the body really set the face off and give this tanager a great look.  Another species listed as fairly common on the east slope of the Andes I expect to see a few as I get my fill of tanagers. 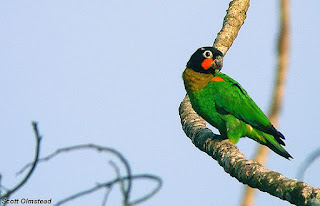 There are going to be a number of parrots and parakeets that are pretty much sure things--the Orange-cheeked does not fall in that category.  Found in Amazonia it is found in the western reaches of the Madre de Dios, but isn't as common as a number of cousins.  But the orange cheek and multi-colored underwings  make this species a standout.  It is known to spend most of the time deep in the forest often near the canopy.  Maybe I'll get lucky from a canopy tower and pick this gem up as a pair cruises from one tree to another. 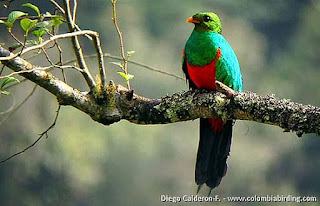 In Costa Rica I missed the quintessential bird of the cloud forest and know I have to go back especially to see the beautiful Resplendant Quetzal.  I have always been fascinated by trogons and quetzals and the batch found in Peru give a few options.  The Golden-headed snagged me with the coppery-golden gloss I saw in various pictures.  Along with the emerald green and bright red this is a standout species without a doubt.  Hopefully, I will have better quetzal luck this go around. 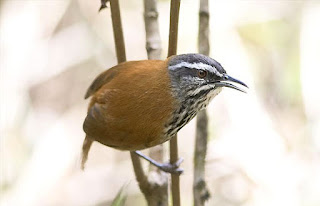 Endemic--that sums it up quite well.  With over 300 endemics in Peru I have to see a few.  Given that quite a few are only found in the northern half of the country I will have to work on those near where we'll be in the south.  The Inca Wren is supposedly a pretty easy find at Machu Pichu, so fingers crossed.  The black-and-white face, and streaked throat along with the rufous body make for a gorgeous little wren and one that you won't see anywhere else in the world. 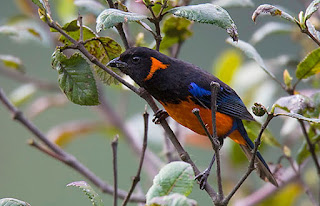 Are you surprised that a third tanager made it in the top 25? I'm not--and this is just the tip of the ice-berg.  Another east slope specialty--this bird is found at much higher elevations, and referred to as an"emblematic" species of the upper montane forest.  Red, purple and black make it s standout--the mountain-tanagers in general are all pretty stunning and it was hard to pick one among the group.  Given that it's fairly common I hoped it would make it somewhat easier to pick up. 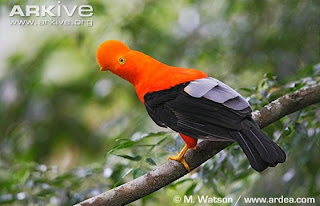 Like the Resplendant Quetzal in Costa Rica, the Andean Cock-of-the-Rock is a symbol in Peru.  Often referred to as the national bird of Peru (it actually isn't) this 13" red (and orange) and black beast screams "Andes".  It breeds at leks like our Sage Grouse.  Can you imagine 25 or 50 of these at Henefer?  The males are polygamous and spend most of their time at the leks doing confrontational battles with other others.  Just an all around interesting bird--and worthy of the top 25.

In a couple days look for Part 2 where I'll cover #15 to #6  before finishing up with the top 5.  The birds only get more spectacular from here, and there might be a few surprises in the top 15.  If the first 10 were any indication, I bet you can imagine what a few of the next 15 will be!

Holy Crap! These birds are smoking! Can't wait to see what the top 15 are.

You have a nice shots!i like to read this colorful birdie from peru look interesting.

Well thanks for posting such an outstanding idea..
Top 15 Most Beautiful Colorful Birds From Around The World