It all ended with a smash! 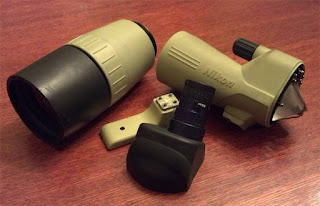 What was left of my Nikon Sky & Earth after the fall

But let's rewind to May 2005 where it all began.  I had just graduated from college and was headed to Wyoming for my 3rd summer of field work with Rocky Mountain Bird Observatory.  For the previous 4 years I had fumbled around Wisconsin, Utah, Wyoming, Oregon, New Hampshire, Colorado, and various other states with a spotting scope that left a lot to be desired.  I don't remember the brand, but I remember the 20-40X50 power scope was a piece of junk--but a piece of junk a kid in college working part time on minimum wage could afford.  And that scope saw lots of birds.

Great Gray, Northern Hawk, and Snowy Owl had been viewed through that scope. Scarlet Tanagers, Blackburnian Warblers, and Veery had graced me with views through the glass.  For the $100 or so dollars I paid for that scope I got my moneys worth--but every opportunity I had to look through better scopes left me envious of what I didn't have.  So with college behind me, and an entire summer to spend hoofing around Wyoming I decided I needed to drop a little bit of money on a better scope.  I actually spent about a month trying to decide what to do.  I could afford something in the $300-500 range.  I wanted something in the $2000 range.  What I found at the time is there wasn't a whole lot in between those two that I saw value in--and there was no way I was going $2000 in to debt for a spotting scope.

So after going to Sportsman's Warehouse a 1/2 dozen times and looking through every scope under a grand, I chose a reliable brand that I had been using since I started birding a decade earlier--Nikon.  The 20-60x80 Nikon Sky & Earth was a beefy scope.  It came in a $549 and although a little bit out of my price range, it was well worth the price to move up from the scopes around $200.  When I got it into the field it made all the difference in the world.  Shorebirds, Gulls, Lark flocks, distant Waterfowl, Grebes, and Loons all were brought in much closer and clearer than previously.  It still wasn't anywhere near top of the line, but man was it an improvement, and it got some serious usage. 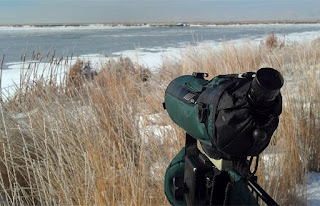 Fast Forward to the winter of 2011-2012 and you would still find me lugging the same Nikon Sky & Earth with me along the dikes at Farmington, across the landfill in Salt Lake looking at Gulls at Lee Kay, at the south shore hoping to turn up a Snowy Owl, and various other places.  This scope had like my previous scope seen a lot of birds.  During the Park City CBC the mounting bracket came off.  I "fixed" it with Super Glue, but it wasn't long before it came loose again--this time in the middle of a country road in Lehi, Utah.  I had turned my back to grab my camera when I heard the crash.  Turning back around I already knew what lay in wait.  The scope on the ground, obviously misshapen inside the scope case.  Picking it up I could tell it was in 3 or 4 pieces--The Sky & Earth had met it's maker.

But it wasn't the end of the road for my scope.  See Nikon has this wonderful 25 Year No Fault Warranty.  That is, Nikon will repair or replace any binocular or scope regardless of how it became damaged and all you have to do is cover shipping and handling plus a $10 fee.  It's a philosophy that has won over many customers, and one that many other optics companies have followed suit with.  Most of the top end companies already had a similar warranty, but Nikon was the first with affordable optics that I had heard of with such a deal.

In any event, I packed my scope back in it's original box, paid the $26 for shipping with insurance, and sent the scope back to Nikon.  10 days later, and $13 for shipping plus the $10 fee and I arrived home to a brand new spotting scope on my porch.  But there is a twist.  As with most optics, and a variety of other products on the planet, most years companies come out with new and better versions of the previous models.  The Sky & Earth had been abandoned just about the time I picked mine up--and Nikon was now into their 2nd version of the new line called the Prostaff.  They didn't send me the newest, but I did pick up the first version of a the Prostaff, a 20-60x82 scope with superior optics to the Sky & Earth, a more rugged build, and a very nice case. 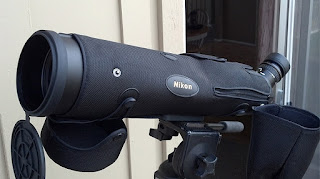 And just like that I should be set for another 7 or 8 years hopefully.  I gave the scope a quick test in my yard, scoping out the mountains about 2 miles to the east. 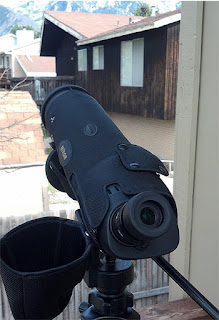 Looking east to the mountains

The view was amazing.  Clear, bright, and crisp.  I snapped a shot with my phone at 20x to show how nice the 2 mile distant peak looked through the scope. 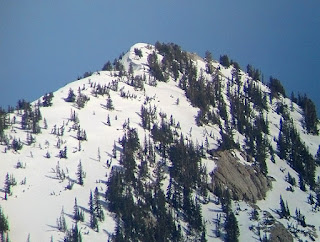 Not a bad view at all

Today I plan on getting out in the field and actually trying it on some birds.  I can't praise Nikon enough for their customer service.  The level of quality provided, along with the coverage of products has made me a Nikon user for life.  The fact that $49 eight years later got me a new $549 scope seems unbelievable.  There just aren't that many business like that anymore

I would still love to go out and pick up a $4000 Nikon Edg Scope, but I don't see the benefit in it for me when I've got a great scope that gets the job done.  In birding it's not about having the best optics and the most expensive equipment.  It's about having the best optics that you can afford and make sense for you.  If you can afford the top of the line stuff, then absolutely go for it.  IF you can't there are a plethora of brands with great warranties that will get the job done and keep you happy for a long time.

So thank you Nikon for always being Top Notch.

Wow, what a great deal. Nikon deserves kudos for having such a great warranty and for backing up their word. That is a hard thing come by these days.

I love the angled eyepiece, the sign of a master scope handler!!! I am so bad at finding birds in an angled eyepiece but it is much easier on your neck and back I'm told.

I had never thought about warranties when I've bought optics in the past. I always baby my binoculars and scope so it never occurred to me that I might need to have them replaced. I just figured that if I broke them I would be out of luck. Great information to know for the future.

@Jerry: Nikon is amazing, and I have always had great customer service with them. They absolutely deserve kudos for the service they provide. Angled eye-pieces make it so much easier to stand looking through flocks of shorebirds and gulls for long periods of time. Plus I'm rather tall, so not having to set my scope as makes it more stable especially in the wind. If only I were a master :)

@Sharon: I really took notice of warranties when I worked for 8 months at the optics counter at Sportsman's Warehouse. It's amazing how varied they are from company to company, and what type of service is provided. I am rather rough on my optics so when I buy them I need something that can at least be fixed when it takes a tumble. I'm sure for every person as rough as me, there are a dozen who baby their optics. In the end Nikon probably replaces far fewer pieces than it sells, so it makes sense to them to provide the service as a selling point--just in case.

Spotting scope is the most required things for focusing on the target.