This year I've decided to try and post about spring migration in Utah at least a couple times per week.  Most of what I am going to talk about is nocturnal migration by radar--with some followups of actual day time migration birding.  I will try to keep up with this until the end of May.  I decided to start in mid April because March and early April migration is so light.  Plus at this point we are getting in to heavier passerine migration.  So let's get started.

I have been periodically checking the radar the last couple weeks.  There hasn't been much in terms of birds moving, but there has been plenty of weather.  Last night was the first night over the last couple weeks where there were actually birds visible on the radar.  Below is a compilation of the previous 5 nights (April 12-16th): 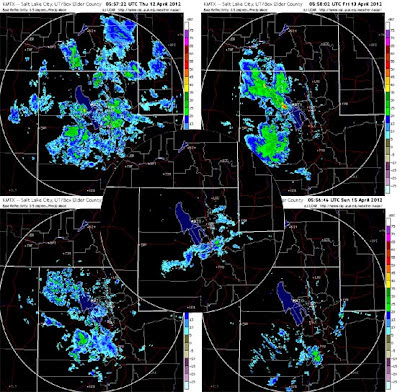 I was beginning to think I wasn't going to seen any migrants on the radar anytime soon--but last night that changed: 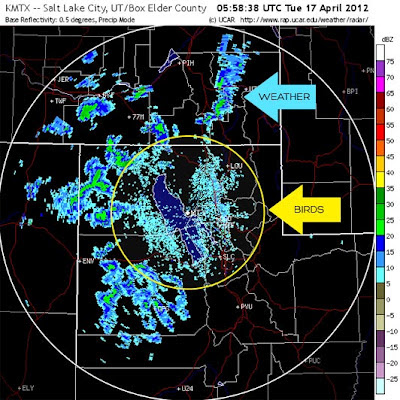 I added labels pointing out the birds on the radar and the weather.  If you want to learn more there are some links at the end of this post that go to past posts where I explain how to read the radar.

Migrants were light last night, but at least they appeared on the screen.  This image is from just before midnight--to be consistent over the next few weeks I will try to be consistent and use images from this same time frame.  However, if something cools shows up I will definitely show images for other times.

I also took a shot of the velocity screen to show something: 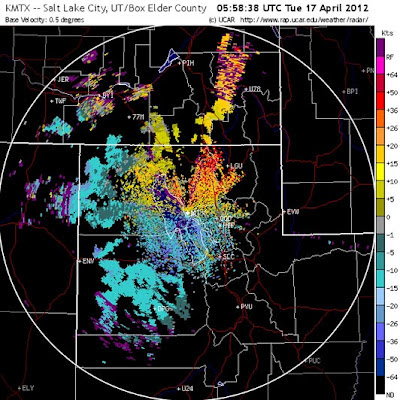 We can assume based off the radar that a few birds were trying to move north as the storm approached.  By 3am migration was all but over for the night as the storm hit the lake.  It's hard to say what types of birds these were, though given the timing shorebirds are likely.  Hopefully, in the coming days as the storms move out and better weather greets us, we can get a few nights with some heavier migration.  In a couple weeks it will be full on passerine migration and the radar images should be chock full of birds.

As I mentioned above here are some more resources for Nocturnal Migration and Birding by Radar:

And if you are interested in looking at the radar at night you can check it out here:

Oh that is really cool. Birds on radar, who would have thought.

That's so cool! I had no idea you could see birds on radar! I'm going to be stalking the local radar pictures late at night now.

This is awesome! Around 11:00 last night, we had all kinds of unusual bird sounds coming from the dark sky above our house in Bountiful. I couldn't ID the noise, but it made me hungry to see fresh migrants. See em on radar, then the sky. Another amazing birding activity... done from the couch and front porch! (Beats watching TV)I wonder how many more yard birds I can add at night.

Thanks for the report.

@Amber: Stalk away! It's a fun way to keep up with migration even when you can't see the birds!

@Shyloh: There are several resources out there for learning night flight calls. I will mention them in my next post--and some of the pitfalls too.