Last night and the night before we were again treated to light migrant movement.  Storms came in across the lake both nights keeping the majority of birds either below the radar or completely out of the sky.  Two nights ago there were more birds in teh air than last night.  I put together this animation showing what happened between 8pm and 4am.  You can see migration pick up as the sunsets, but then it comes to a halt as the storm hits the lake.

The other cool thing you can see in this image is the storm coming in from the west form near nothing to completely filling half the screen.

These storms are certainly keeping the majority of migrants out of the sky at night--but that could all change this evening.  According to the Weather Service, the storms are supposed to push through the Wasatch Front today and tonight will be partly cloudy--followed by 3 mostly clear nights (and great nights for night migrant listening with temps in the 50's)... Plus, the next 4 nights also happen to center around the new moon.  There are potential ups and downs to this.  The plus side being that there has been evidence presented that the moon can interfere with with stellar navigation. So no moon may mean that more birds are out--although this is purely speculation and has no real science backing it up.  The major downside is that it makes it harder to find your way through the dark.  It also means that if you were planning on scoping the moon to try and watch for passing migrants, you can't.  No moon won't effect your ability to listen for night flight calls though!

On a side note, with the new moon being this week, that means that May 1st through May 15th will be nights filled with plenty of moon, so if you wanted to test out scoping the moon for passing migrants you could (I personally will be trying to pick up my first Flammulated Owl of the year I think!).

So above I mentioned scoping the moon, and some of you may be left scratching your heads.  I haven't really touched on this before, only because I have never had much luck with it, but many observers back east can attest to the fact that you can see migrants even a couple miles above the Earths surface passing in front of the moon.  I had a friend from Michigan who on multiple occasions shared stories of doing this from his yard.  I may give it a whirl here in a few weeks once the moon is out in full force again.  If any of you try please feel free to share your comments on the blog and let others know form where, what time, and what kinds of numbers you saw.

Anyways, back to the radar.  Last night was a far lighter night of migration than the previous night but still there were a few birds moving.  Something interesting that I noticed was the line of birds apparently over the Wasatch Range on the east side of the Great Salt Lake. 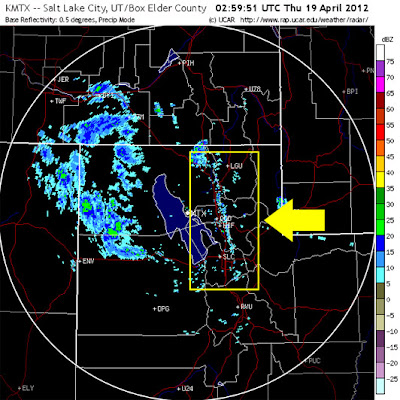 This is something that I have noticed in the past and appears to be pretty common during both the spring and the fall.  One assumption is that these could be sparrows, and other forest birds starting to arrive,  They could be wintering species heading back north.  Something that many wouldn't think of but makes a lot of sense right now would be migrating loons.  Possibly hundreds moving over the mountains right now as they head north to breed.  As you watch the radar the next couple of weeks look over the mountains and see if you notice any patterns.  As migration picks up it may be harder to actually pick this line up as there are going to be hundreds and thousands of birds up there.

Another reason I am pointing this out is that it may be worth your while to listen for night migrants at higher elevations.  A few years ago when Colby Neuman and I would listen for migrants around Salt Lake we tried a number of locations.  Almost always it was higher than the valley floors but not way up in the  mountains.  The hills above the State Capitol Building, and South Mountain were 2 places we tried.  Colby tried a few other high elevation areas, and I did a couple nights over 9000' feet in the Uintas.  The best night I had listening for migrants in Utah was at 9400' in August 2007 in the mountains south of Strawberry Reservoir.  Overall however it's always a mixed bag, or like Forrest Gumps mama always told him, "you never know what you're gonna get".

I will leave it at that for now, good luck listening for night migrants--let us know if you're hearing anything!

If you watch the first frame of the animated image you put up you can see the line over the mountains like in the second image you mentioned.