If you were looking at the radar last night, you will probably agree that migration is definitely upon us.  It was the first night where we had a fairly decent number of birds moving across northern Utah.  Let's jump right into it and show a screen capture from a few minutes before midnight: 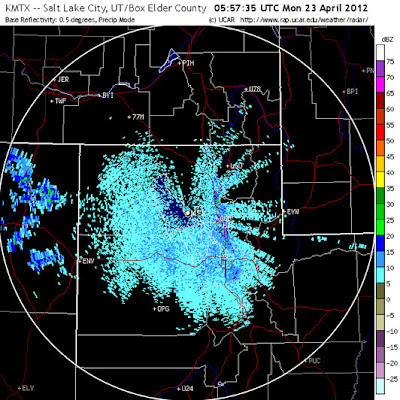 Although we are still on the lighter side of migration, this was by far the heaviest movement of the season mostly between 5-10 dBz.  If you look over the Wasatch range you can see some of the darker blue where there appears to be higher concentrations of birds.  Given that, today would probably be a good day to get out and check your local watering hole, patch of trees, or anywhere else where early songbird migrants, and right on schedule shorebird migrants might be.

Hopefully with a few more days of nice weather we can have a couple more nights like this before the coming storms slow things down.

Over the weekend migration was pretty light, but there was some interesting movement.  Of note was the fact that there was a stream of higher reflectivity over the Wasatch Mountains both Friday and Saturday Night.  In the image below (Saturday at 11:54pm) the area surrounded in yellow has a distinct north south line of blue.  The browns over most of the image are very low density objects--often associated with being insects, dust or other objects. 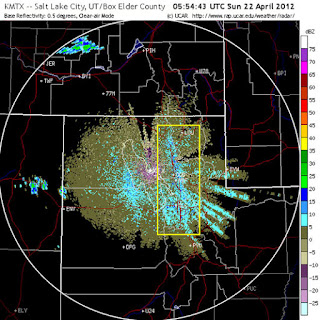 On both nights around 10pm the radar was a little more interesting when what appeared to be large numbers of birds leaving the north end of the Great Salt Lake and the Wasatch Range showed up on radar shortly disappearing to the north into Idaho.  Here is an animation from Friday Night between 9 and 10pm:

You can see at the beginning there isn't much happening then all of the sudden the top of the images is filled with blues and greens expanding northward.  By midnight things were rather slow and the radar looked very similar to the one from Saturday night.

Finally, on Thursday night migration in Utah was extremely slow.  I thought with the storms having passed things would pick up quickly--but it took a couple nights to get moving.  However, while we were having a slow night in Utah, that southeast United States was having what they would call a slower than average April night: 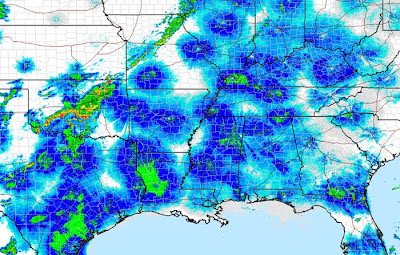 We can only dream of nights like that out west.  Happy Migration Everyone.

I was out west at the tree of utah at i-80 on Saturday and saw lots of lightning to the north, on an otherwise clear-as-a-bell night.