Jeff Bilsky and I headed to southern Utah this past weekend hoping to miss the snow, have some warmer temps, pick up some new year birds, and find a few good ones as well.  On the way to my house Jeff spotted a MERLIN on 2000 East and Bengal Blvd (appx 8200 south).  After leaving Salt Lake we headed to Grove Creek Canyon in Pleasant Grove to try for the Winter Wren. Along the way we noted a DOUBLE-CRESTED CORMORANT at Mill Pond in American Fork.  When we got to Grove Creek Canyon we heard the previously reported WINTER WREN calling from the brush south of the parking area.  It took a couple minutes to find the bird and about 20 minutes before we got decent looks.  I was able to make a pretty good recording of it chattering, but only managed a mediocre photo. 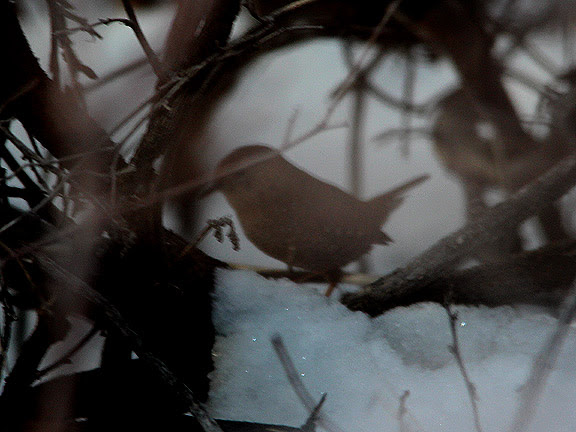 This bird was unofficially my 402nd species for Utah, and strangely it didn't leave me in wonderment like so many others have.  I was more excited about birds that are way more common in the following days.

After the wren we hopped back on the highway and sped south arriving in St. George for the night.  We made our way in the dark onto the Beaver Dam slope, setting up camp on a flat patch of dirt I refer to as the middle of nowhere.  It was around 36 degrees when we arrived and instead of tents, just threw our bags out next to the truck, the way birding and camping in February in Utah should be. 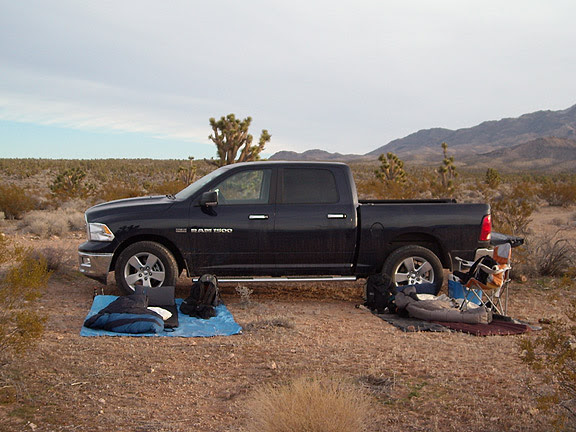 Camping in the middle of no where!

It did get cold but the night passed quickly, with a GREAT HORNED OWL piping up around 5:00am.  After that I passed back out only to be awakened just after 7:00am by Jeff screaming, "Tim Get Up!  Get Up!"  Startled and half asleep I came to as Jeff pointed skyward and yelled, "SNOW GEESE!"  As we watched and listened, 3 flocks totaling almost 500 birds passed over the Mojave Desert, barren and void of places for the birds to stop--it was surreal seeing these white geese in this place. 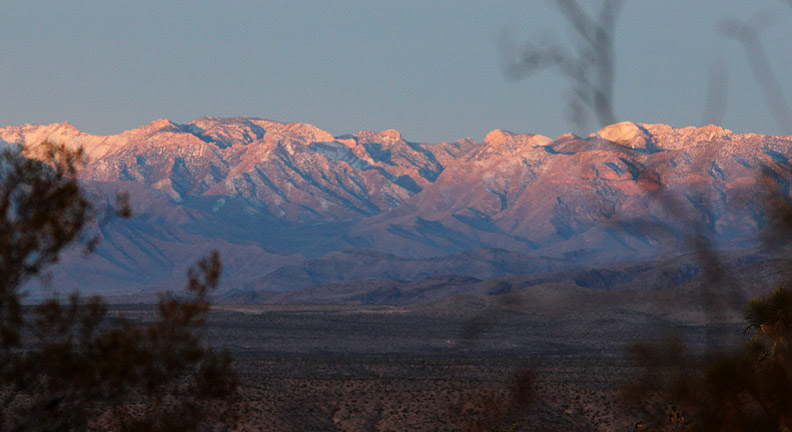 Sunrise on the East Mormon Mountains in Nevada

After getting fully composed it was easy to sit back and listen to the desert come alive.  House Finches flew over calling, while a CACTUS WREN chattered off in the distance.  A LOGGERHEAD SHRIKE called over and over again--these hardy bird were the voice the morning.

We got rolling and headed across the slope.  A pair of BREWER'S SPARROW crossed the road at our first stop, followed by a ROCK WREN.  Few other birds were active in the shadows and cold. A flock of PINYON JAYS working through the Joshua Trees was a nice sight. 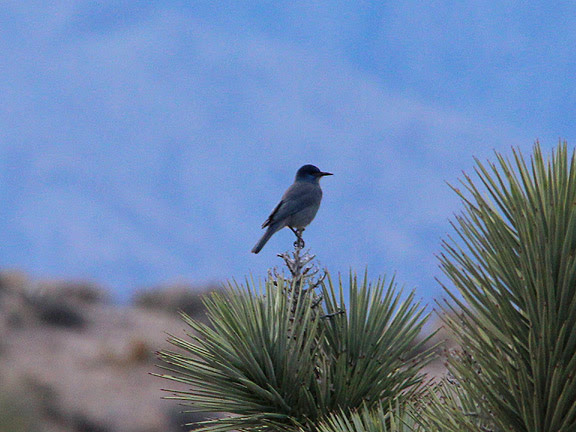 As we came to the edge of the wash the ever powerful view of the ranch got me excited for the birding to come--way more than that Wren the day before--it was the desert in February and it was coming alive.  At the ranch we picked up our first WESTERN BLUEBIRDS and VERDIN.  White-crowned Sparrow were chattering.  A sapsucker could be heard drumming from nearby.  BEWICK'S WREN were hastily scolding from the creosotes. The sun was now warming things up and I could sense we were in for some good birds. 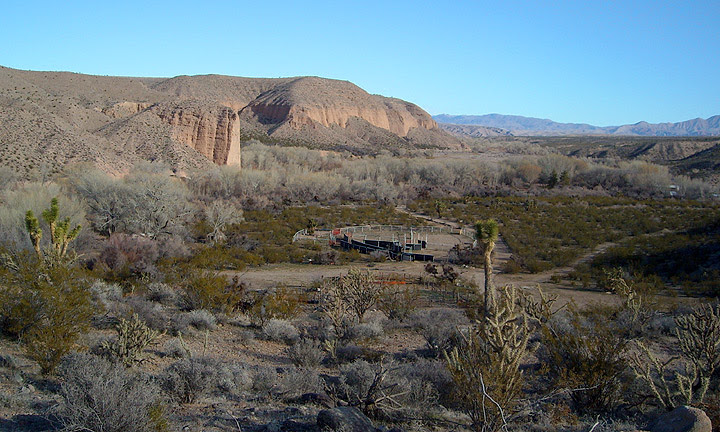 As we approached the camping area and small orchard a HARRIS'S SPARROW popped up right in front of us.  A moment later we had 2 and were elated at how easy they came into view.  They provided excellent photo ops in great light as well. 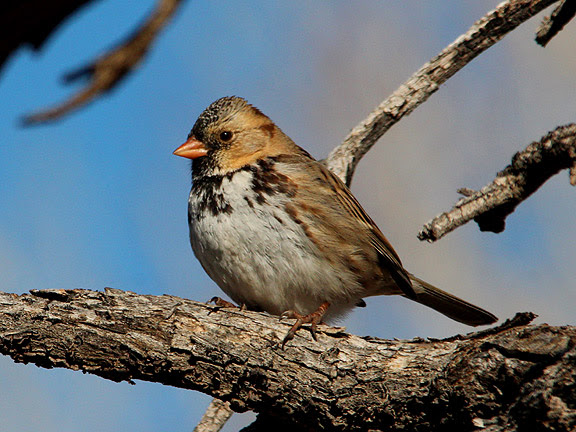 1 of 3 Harris's Sparrows seen on the trip

Heading into the trees towards the main orchard Jeff found the YELLOW-BELLIED SAPSUCKER which also provided excellent looks. 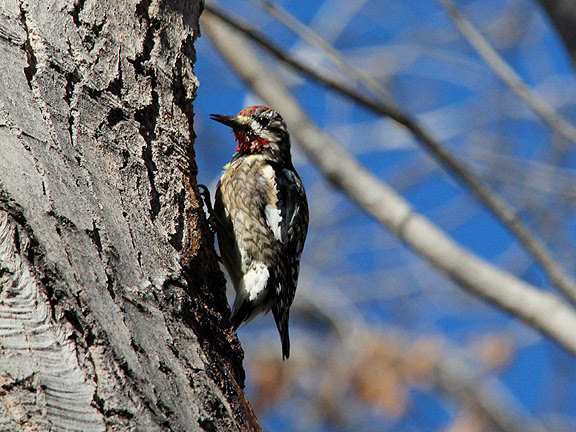 Onward into the orchard there were dozens of sparrows, mostly White-crowned, Savannah, Lincoln's, and Song.  We also turned up one VESPER and a alternate plumaged CHIPPING SPARROW that must have recently arrived.  We walked up through the ranch to the pond and back down to the orchard again where a male ANNA'S HUMMINGBIRD posed for photos. 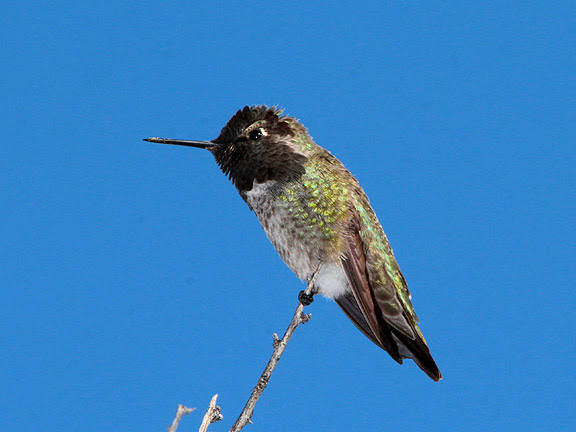 This male Anna's Hummingbird came back twice to pose

Back near the houses we got short looks at an early female COSTA'S HUMMINGBIRD.  We split up for a little and I came across the WHITE-THROATED SPARROW previously reported in the small orchard.  The birds were in a cooperative mood today. 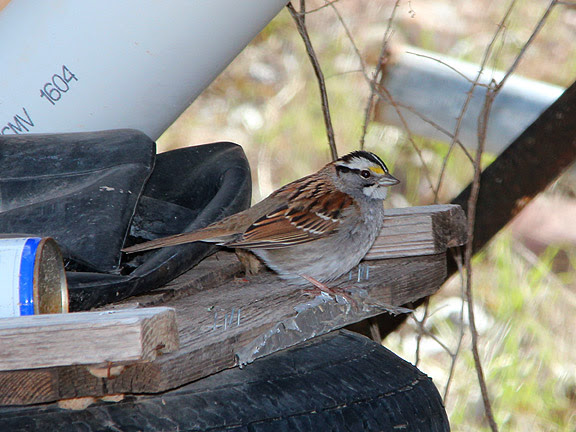 1 of 2 White-throated Sparrows at Lytle Ranch

We crossed Beaver Dam Creek to check the trees south of the river where a nice flock of warblers was moving through the trees.  2 ORANGE-CROWNED WARBLERS were mixed in with the more common Yellow-rumped.  We headed back to St. George stopping at Ivins where there was a smattering of waterfowl, and where the wind had picked up making it difficult to want to scope the water.  We tried for the Vermilion Flycatchers in Santa Clara but came up empty handed. WILSON'S SNIPE and KILLDEER were a consolation, along with 2  arriving NORTHERN ROUGH-WINGED SWALLOWS.  A MUTE SWAN could be seen down river, and Jeff picked up Marsh Wren as well. 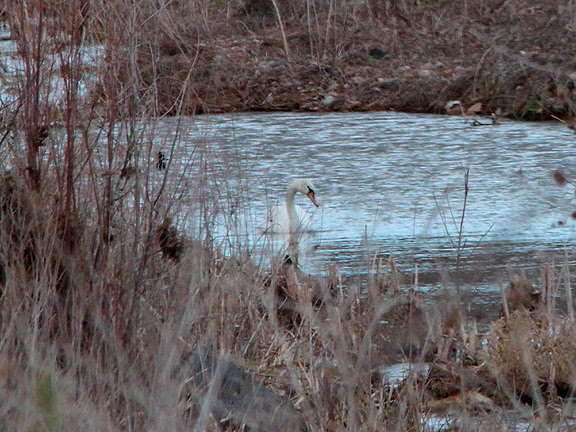 Tonaquint Park produced the usual ABERT'S TOWHEES and had a more than cooperative CANVASBACK and several RING-NECKED DUCKS for photography. 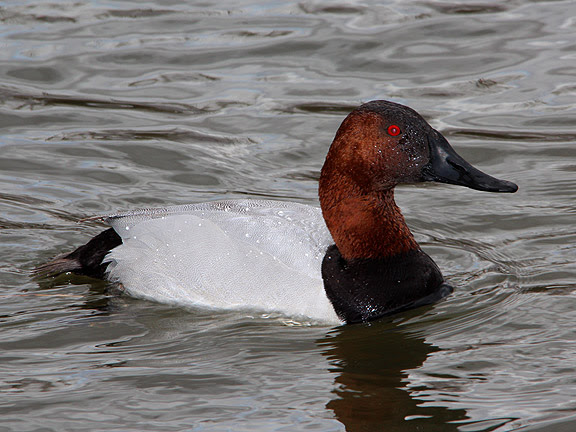 St. George Golf Club had it's usual mix of Mallards, Wigeon, and Coots, and Springs Estate Pond had its continuing SNOW GOOSE (a.k.a. Big Day cannon fodder).  The Washington Fields were as busy as I have seen them with traffic. I t was a little disheartening seeing so many people criss-crossing the tiny roads here.  We tried for the Lark Bunting to no avail, but in just 4 minutes snagged all 4 common Utah Falcon species within a mile of each other--a highlight on its own. This Peregrine Falcon was 1 of 4 falcon species seen in 4 minutes!

As we passed over the Virgin River into Washington City I noticed what looked like some Hooded Mergansers on the public fishing pond there, but wasn't able to stop.  So instead we pulled into the turn around at the tiny pond I have always called Washington Fields Pond to the southwest side of Washington Fields Road at 840 south.  As we turned around Jeff spotted a Cormorant so we hopped out to see what else was there.  As we walked towards the bird and I got a good look I hollered to him that it was a NEOTROPIC CORMORANT! 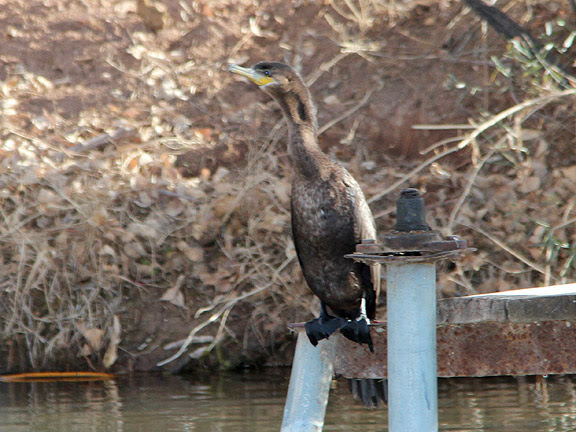 First reported Neotropic Cormorant of the year in Utah

Several GREATER SCAUP were also here--while we watched the cormorant took flight and disappeared to the southeast towards Springs Pond/Seegmiller Marsh. Back across the river at the fishing pond there were indeed 8 HOODED MERGANSER. 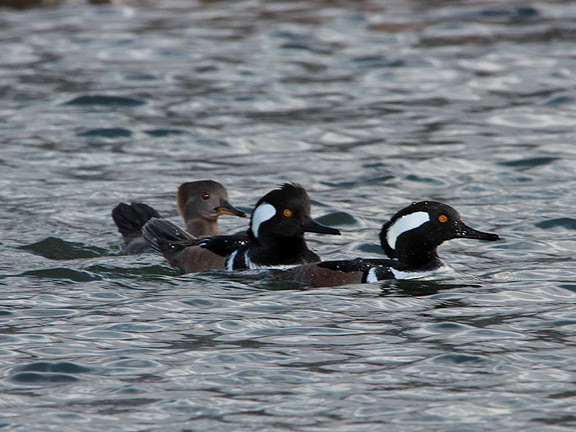 Hooded Mergansers in the Washington Fields

Wanting to maximize the daylight we had, we headed back through St. Goeorge towards Santa Clara.  Along the way we saw about 50 GREAT-TAILED GRACKLE eating out a In-n-Out Burger.  We headed to Stonebridge Golf Course where a tip on a GREATER WHITE-FRONTED GOOSE led to great looks. 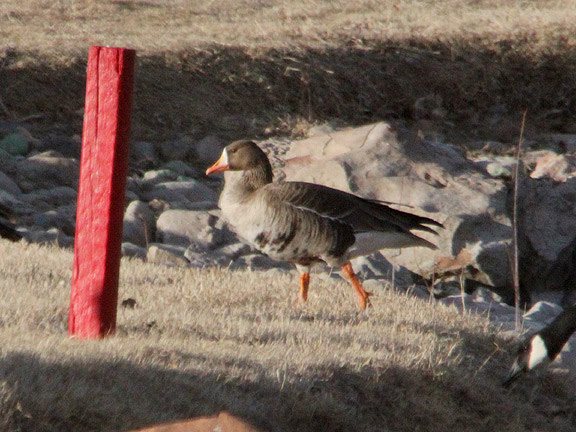 We finished off the birding for the day at Entrada Golf Course where the continuing ROSS'S GOOSE (potential cannon fodder for a big day again too) was--as well as a few HOODED MERGANSER and a GREAT EGRET.  Before heading back out to the slope we stopped at IRMITA's on St. George Boulevard for some delicious, greasy, and most importantly hot Mexican food.  The Carne Asada was warmed my soul, before the the icy winter night would take it out of me.  Back on the slope the wind made the already cold temps feel even colder.  We camped out again, and the 2nd night definitely felt colder than the first! 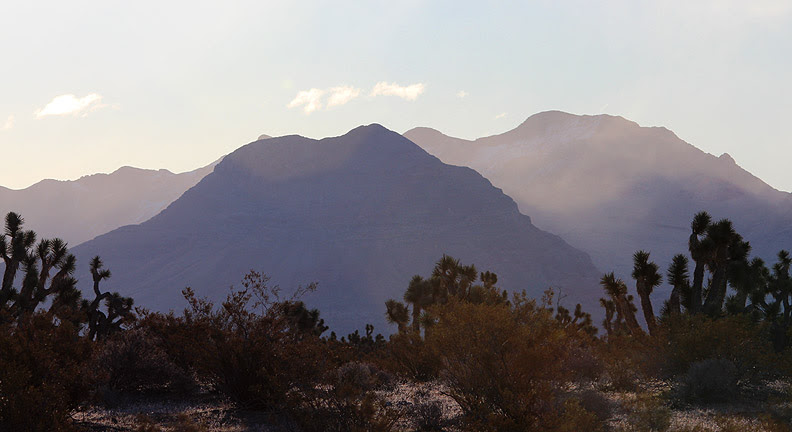 Sunrise over the Beaver Dam Mountains

Sunday morning started in the same fashion as Saturday--minus the yelling and the geese, and the jays.  This time we added MOUNTAIN BLUEBIRD going across the slope.  The ranch was in a similar state of affair from the previous day.  We only snagged one Harris's this go around but did find 2 different WHITE-THROATED SPARROWS.  We picked up GAMBEL'S QUAIL which evaded us the previous day, and I found a lone HERMIT THRUSH in the small orchard. 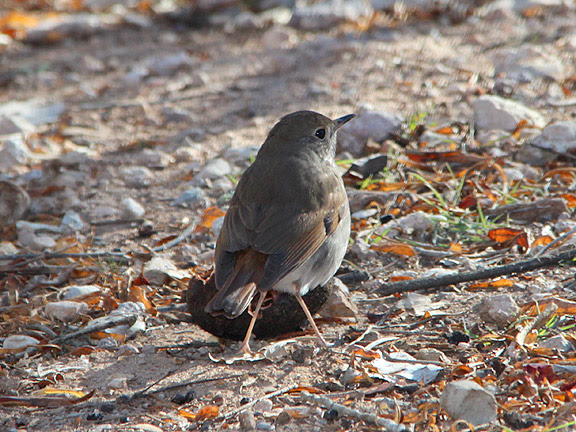 A Hermit Thrush in the small orchard at Lytle Ranch

The wind made the birding brutal and most of our stops were more frustrating than enjoyable.  We put almost an hour in looking for the Vermilion Flycatchers again--and again had no luck.  We did find a FOY CINNAMON TEAL mixed with a flock of Green-winged.  We again spent some time in the Washington Fields, and drove Washington Dam Road over to Sand Hollow.  The birds were sparse but the view was amazing. 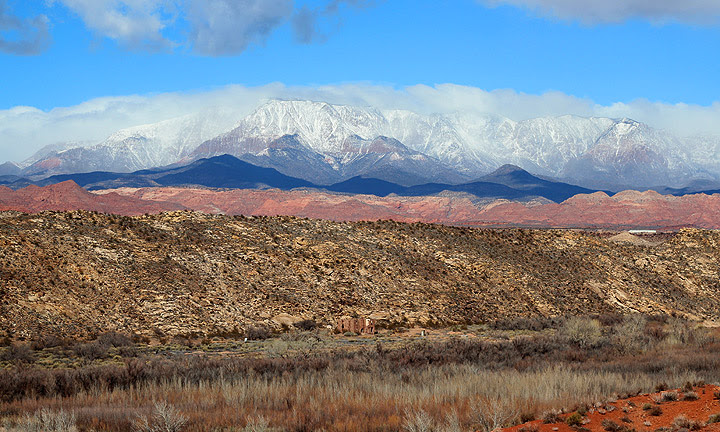 Sand Hollow was riddled with white caps--and few birds.  The SR-9 Sewage Ponds have a nice flock of 35 DOUBLE-CRESTED CORMORANT, and we couldn't turn up anything in Zion'ss Gate or the surrounding neighborhoods that resembled an Inca Dove.  And aside from the flock of Ring-billed Gull at Stratton Pond, the most interesting sighting there were the polygamists in full garb--gotta love Utah!

We made one last ditch stop at Quail Creek to add WESTERN GREBE for the weekend before hopping on I-15 and heading north.  The drive back was raptor filled.  We had a ROUGH-LEGGED HAWK at mile marked 40 just inside Washington County.  I think this was only the 2nd Roughie I have had in Washignton County, although there appear to be dozen of reports in eBird.  By drives end I think we had about 40 Red-tailed Hawk 5 BALD EAGLE, a GREAT HORNED OWL form Fillmore, and a couple Northern Harriers.  The last bird of the trip was one of the continuing dark MERLIN at 1300 East and 9400 south in Sandy.

We recorded 101 species  from Salt Lake, Utah, Juab, Millard, Beaver, Iron, and Washington County--not a bad weekend in February!  A link to my gallery with more shots is here:

So jealous... I need to get down there.

It was fun getting to compare and contrast our trips that were one week apart. Nice shots as always.

@Sarah: It's a great time of year in Washington County. In the next couple weeks the early breeders like Common Black-Hawk, Lucy's Warbler, and Costa's Hummingbird will be back.

@Kenny: Thanks on the pics! I know--it would be awesome to have a bunch of people plan trips a week apart from the beginning of the year through May and run the same route each trip. Then compare and see how things change week to week.