On Saturday June 1st I wanted to search for Elf owls at Lytle Ranch Preserve in Utah's Mojave Desert, but had to give up because the ranch dogs wouldn't stop barking.  I ended up heading back to my car which was a few hundred yards away so the dogs weren't as loud.  AS I arrived back at my parking spot I heard a Western Screech-Owl singing from the trees nearby.  After a pathetic imitation whistle I was surrounded by at least 5 of these little owls.  One landed on a dead snag hanging out over the road which gave me the opportunity to try filming at night--something I had not tried before.  Below is the final product:


The video clips were shot using my Canon t3i camera body and a my Sigma 150-500mm lens, set at somewhere between 300-400mm.  The picture at the beginning used my Canon 580 ex II flash at 1/200 second.  The videos were lit up by a Surefire halogen lens shined from near the camera at the snag near the owls feet.  I shot video in 30 second increments followed by a few minutes of leaving the bird alone, hoping not to cause to much distress.  In all I shot 5 clips of this bird to make this video, before leaving the bird alone and looking for the others in the trees nearby. 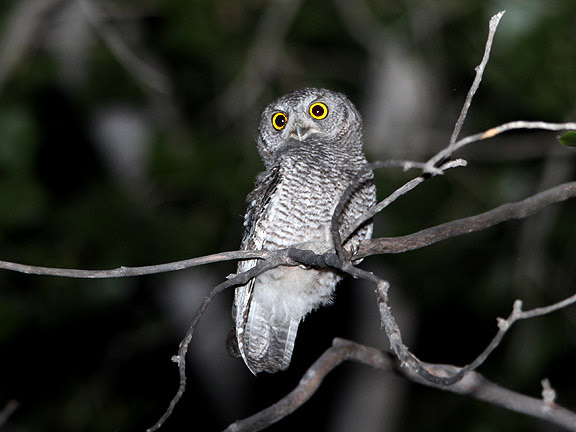 Nice Job! that Is Awesome!

Great video, had to of been fun to do!

@EVERYONE: Thanks for the comments everyone! Glad you enjoyed! Hopefully I can do some more of this.