Last night, 13 Utah Birders headed into the hills outside Salt Lake City to look for Flammulated Owls.  What has become an annual trip was nothing short of great this year.  With a 98% full moon and wonderful summer weather we started the evening off at Mountain Dell Reservoir and Parley's Creek, picking up the common montane species expected in the area with great looks a GREEN-TAILED TOWHEE and LAZULI BUNTING.  A COOPER'S HAWK being mobbed by a flock of cowbirds, blackbirds, and alone Western Kingbird was a good show, while a BREWER'S BLACKBIRD dive-bombed a fly-over TURKEY VULTURE as well. 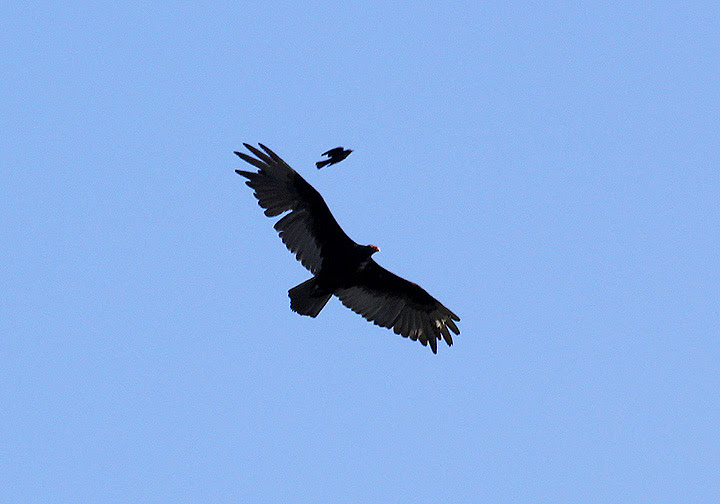 On the actual reservoir a pair of AMERICAN WIGEON accompanied the throngs of Canada Geese and Mallards.  Nearby an active RED-TAILED HAWK nest held several young birds, while an OSPREY stood watch from its nest platform. The warm air made things a little slow but we picked up the expected birds for the area. 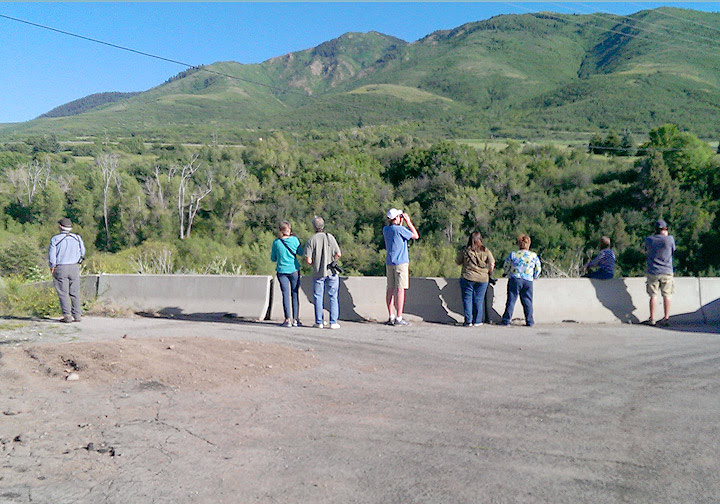 A quick stop at Little Dell Reservoir turned up the out of range LEAST FLYCATCHER that appears to be on a territory.  Poor thing won't find a mate this year! 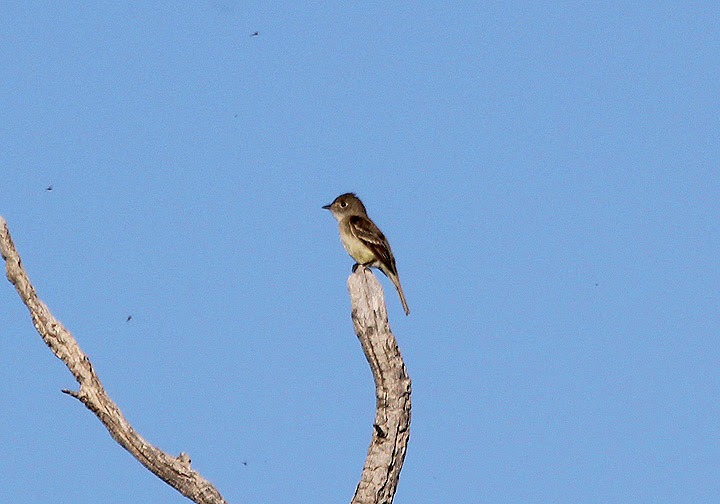 Least Flycatcher on a perch at Litte Dell As it started to get a little darker we headed to Big Mountain Pass where things were considerably less birdy than usual.  We did get both HERMIT and SWAINSON'S THRUSHES at the pass as well as a WESTERN TANAGER, DUSKY FLYCATCHER, HOUSE WREN, and the expected VIOLET-GREEN SWALLOWS.  But there wasn't a lot of activity in the usually bustling forest. 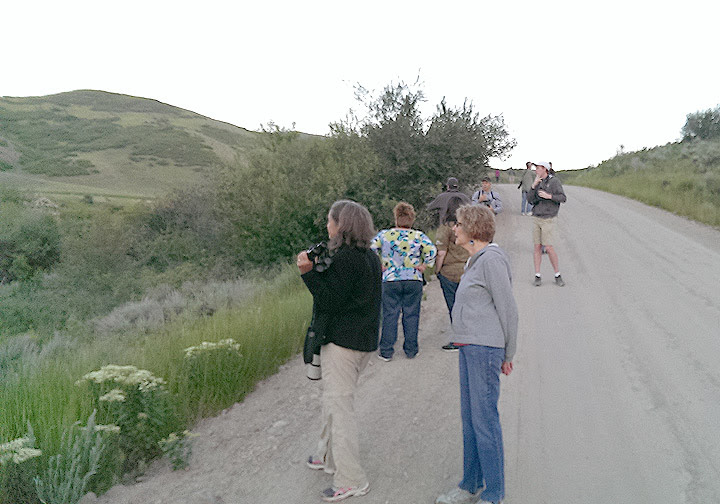 Not wasting time we headed to Jeremy Ranch Road.  A WESTERN WOOD-PEWEE greeted us at the parking area and we quickly located one of targets in a local nesting AMERICAN DIPPER.  Along the creek we had several singing FOX SPARROWS as well as a BULLOCK'S ORIOLE, and a singing YELLOW-BREASTED CHAT keeping hidden in the willows. 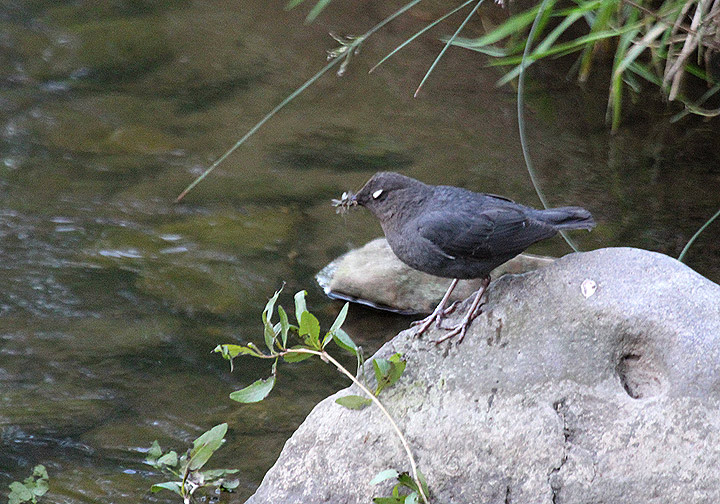 As it got dark 4 COMMON NIGHTHAWKS appeared over the road providing great looks for the entire group. 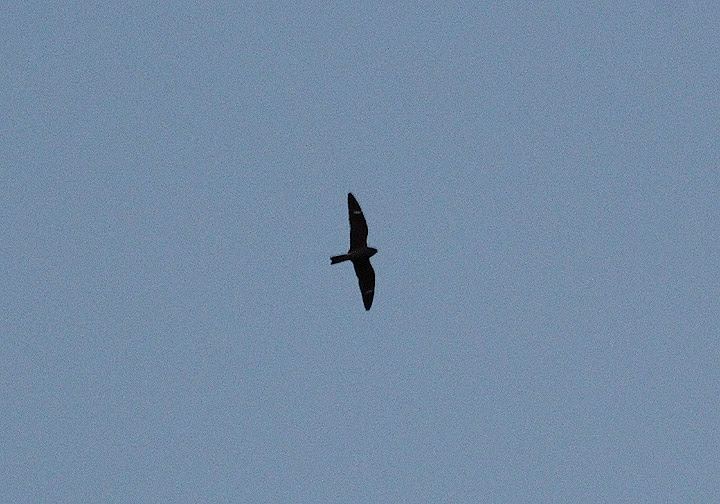 We headed back up the canyon picking up a GREAT HORNED OWL perched alongside the road.  When we reached our owling stop we headed into the forest. Almost simultaneously we had a drumming RUFFED GROUSE, a distant calling COMMON POORWILL and a nearby FLAMMULATED OWL.  Concentrating on the owl we called the bird in and the whole group got great looks at the little bird.  Several others sang from nearby and after a little work we had one individual perch in the open singing without us using playback for a good 15 minutes. 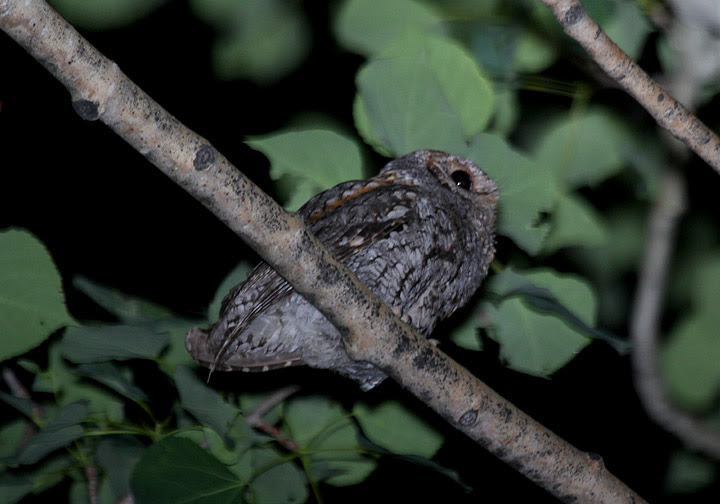 As we were set to leave Jeff heard the drumming of the grouse again and in an attempt to find the bird I stumbled across it squatting on a log about 10' from where we were looking.  It quickly scampered into the underbrush and out of view unfortunately.  We headed back to the cars and went up canon to our next stop where several more Flammulated Owls were singing.  While we tried to bring one in, a NORTHERN SAW-WHET OWL burst into song back down the road from us.  There was some confusion as others in the group were off to the west and had apparently played a Pygmy-Owl tape around the same time.  However after asking what call they played and how many times, it was apparent that they had not played an alarm call and we had indeed heard a Saw-whet in a different direction. 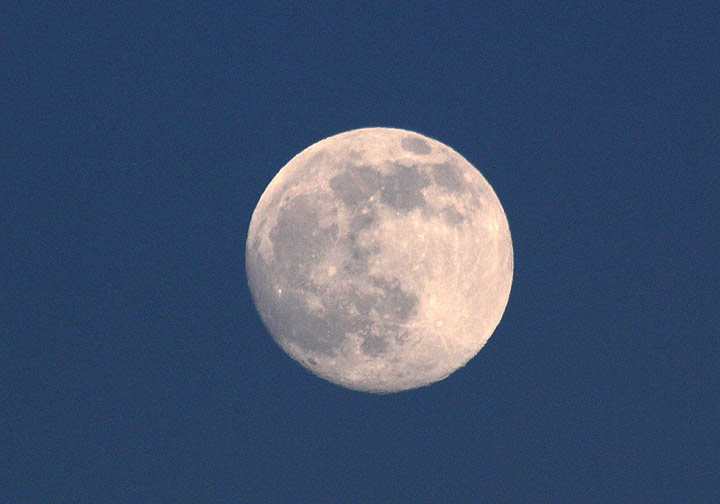 We tried hard to get another look at a Flammy, but only had a flyover while trying to find a bird hidden in the big pines.  We made one last stop at Big Mountain Pass which was quiet.  The group departed while a couple of us stayed behind.  It wasn't even 5 minutes and a COMMON POORWILL started singing like crazy in the canyon below. Timing is everything!  We headed into the forest and after a couple minutes had multiple singing FLAMMULATED OWL.  With a little work we had a great photo opportunity with one of the birds, before we called it a night! Last bird of the night, a Flammulated Owl in Mountain Dell Canyon

We tallied 62 species for the evening, but more importantly had great luck with tiny owls on a wonderfully lit almost full moon night with a great group of Utah Birders!