It was a great day to be a Utah Birder!  We kicked off our first ever Park City CBC event with 14 participants on what started as a freakishly cold morning and turned into a beautiful day.  Let me start by just saying thank you to everyone who took part in our inaugural CBC for Park City.  The people are what makes an event like this so much fun.  It's a strange place to go without a CBC for so long, especially given the population and proximity to Salt Lake.  When we chose Park City these were just a couple of the reasons that helped guide our decision.  Perhaps more interesting was the fact that Park City rarely generates any reports of birds during the winter months.  The occasional feeder report, a tourist mentioning something from the slopes, or a a random report form Summit Park usually make up the annual mix.  But surely there must be more to his area in the winter months, and the CBC was a perfect way to start finding out more.

The count circle was centered near US-40 and I-80.  This allowed us to go west to Summit Park, east to Rockport Reservoir and Peoa, and south to the north half of Jordanelle Reservoir.  To the north we didn't do a whole lot of research, or really any birding, so that will be for future CBCs.  In any event this gave us a great variety of habitats and for future events will be very easy to break into smaller quadrants.  This year we opted to try a different approach as the majority of the group had never birded in the Park City area.  We decided to load up in a few vehicles field trip style and use this year to scout the entire count circle, and allow everyone to get a better feel for the most common birds in the area.  Kim Roush and her husband who are quite familiar with the area set off on their own to check out some private areas, as well as search for some local specialties  I think most of the group would agree that this worked out fairly well as everyone got to see the vast majority of the birds we encountered.

I hit the mountains early--about 5:30am and I was in Summit Park whistling for Saw-whet and Pygmy Owls like a mad man.  I was shocked having two cars pass me on Matterhorn Drive in the pitch black.  Surely they thought I was a mad man--why in the hell is this guy standing on the edge of the road in the middle of the night in the middle of nowhere?  Well the mad man in the middle of nowhere thing panned out in the form of one NORTHERN PYMGY-OWL who gave into my whistling and responded with a few short toots, and a rapid chatter before going silent.  What a great 1st bird for the CBC.  It would be the only owl that I was bale to find.  I drove the lower section of Jeremy Ranch Road hoping for a Great Horned Owl, then around Snyderville Basin through the marshes and grasslands thinking maybe a Barn or Short-eared may appear.  The temperature gauge in my car read 7 degrees at 7:00am.  In the first light of the day I managed to turn up my only 3 other species in a small flock of Mallards, a couple American Robins, and 2 fly-by RING-NECKED DUCKS.

At 7:30 I met with the rest of the group and we organized into our respective vehicles then headed out. We drove through the neighborhoods are Park City looking for feeders, and songbirds. Lots of House Finches, and Black-capped Chickadees followed, and slowly we picked up Siskin, Juncos, Scrub-Jays, and doves.  There seemed to be chickadees everywhere in the morning.  One flock led us to our only Sharp-shinned Hawk perched low in a bush on a hillside.  More chickadees led to Mountain Chickadees and goldfinches.  The species diversity was slim, but the abundance was quite impressive.  We spent some time looking for open water on a number of ponds around the city.  Time after time we struck out on the water.  All was frozen, and any that might have been open we weren't able to get looks at.  Mid morning we headed west out of the city towards Summit Park to get away from the hustle and bustle of the cars, and into the action with the mid-elevation conifer species.

Summit Park provided our fill of the birds we expected--but also quite a few more cars than normal.  On the way up we ran into the Beyer's who were in search of the Pygmy-Owl without luck.  We added several TOWNSEND'S SOLITAIRE, HAIRY WOODPECKER, RED-BREASTED NUTHATCH, and STELLER'S JAY.  There were lots of siskin and juncos as well--Carl and Eric Peterson found a GRAY-HEADED JUNCO; I can't remember another winter report form northern Utah so that was an awesome find. On the drive back towards Park City we added our only Red-tailed Hawk of the day just off I-80 near the tubing hill at Jeremy Ranch.  After a brief lunch we packed back in the cars and headed out around Swaner Nature Center.  The fields were empty, and the birds were few and far between.  Then we found a pond with some open water and things got a little better.  Aside from the Mallards on the water, we added Canada Goose, American Wigeon, more Ring-necked Ducks, Redhead, Green-winged Teal, Common Goldeneye, and American Coot.  While we watched the waterfowl we had both GOLDEN and BALD EAGLES fly over in a matter of minutes.  This stop added the most species for the day and was a welcome kickoff to the afternoon. 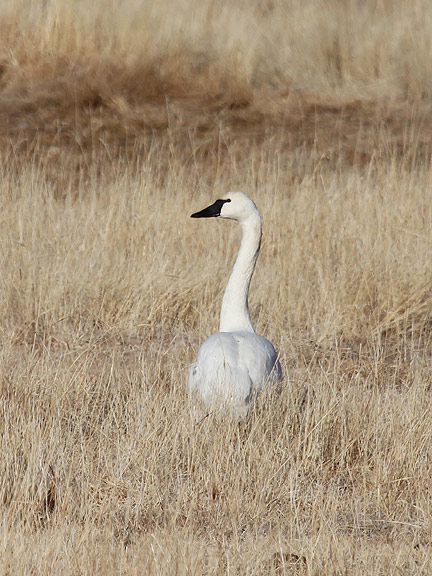 Tundra Swan in Peoa was a great find for the day

We continued to the east and then south to Jordanelle which was completely free of ice.  This surprise didn't add a lot of species--but did make for a nice break to scan the open water.  11 BUFFLEHEADS were a highlight, as well as 1 CALIFORNIA GULL (the only of the day).  A huge raft of Coots, several Canada Geese, and Common Goldeneye rounded out the birds that we picked out. We kept going east to Peoa, where we added our first Kingfisher of the day along the Weber River.  A couple hundred yards further along the road, Carl spotted a lone Swan in a small creek.  WE flipped around to take a look.  At first glance the bill looked massive and like it may be a Trumpeter.  But once in binocular and then after some closer looks it was just a TUNDRA SWAN--still a great bird for an odd location, and our only of the day!  We ended the day at Rockport State Park and then on the Weber River below.  At the entrance station near the inlet we had a beautiful NORTHERN SHRIKE and another Kingfisher. We tried up and down the east side of the lake for titmouse without any luck.  Another Solitaire and Bald Eagle did give us some great looks.  Rockport was a different story from Jordanelle in that it was 98% frozen.  There were several small patches of water which didn't have much on it.  In the middle of the lake on the ice was a small flock of Canada Geese accompanied by a few GADWALL and American Wigeon.  As we drove, Carl again spotted what he thought was a grebe.  After pulling over we confirmed it was a WESTERN GREBE on a small piece of open water.  Morse surprising, and sad however, was a single COMMON LOON stuck on the ice in the middle of the lake.  We watched as it tried to flap several times along the ice to get to water.  Unfortunately, I don't think there is much hope for this late loon.

The last new bird of the day was a female HOODED MERGANSER in the same location, but on a big chunk of open water.  It was our 48th species of the day and a great way to end this first CBC.  The Roush’s added ROUGH-LEGGED HAWK, GOLDEN-CROWNED KINGLET, and AMERICAN DIPPER to top 50 species for the day.  As with most CBCs the surprise were great, and the misses were kind of shocking.

Sounds like fun! I've never had a Gray-headed Junco in winter in Northern Utah, but eBird shows several records from the SLC/Provo area (http://tinyurl.com/6lp2qk4), and apparently you had the record high count for winter here, with 8 on Christmas Eve, 2008: http://ebird.org/ebird/view/checklist?subID=S4388818 .

Ryan, this is a prime example of why the data in eBird isn't the end all be all. As I clearly said in the post, " I can't remember another winter report from northern Utah". Obviously I entered a field incorrectly in the app at the time because I have never seen a gray-headed junco in Utah in the winter.

eBird is a great tool but is full of human errors. Naturally the program doesn't catch or flag everything so things like this slip through the cracks. Aside from that there are ,ore than 100 years of historical sightings not in the database and that will never be. I would imagine in that time there have been handfuls of reports of this subspecies, so eBird only shares a tiny fraction of that information. It makes the application pretty unreliable for all time early arrivals and late departures given that limited scope. Out of season reports that don't get flagged for one reason or another also fall in this category. It is however indespensible in terms of general trends and overall data for species. Given the millions of records input in the last few years the data is really starting to take shape.

That's the 2nd earliest report of fact checking of seen in this county, this winter! haHa :)

It is always interesting to reference ebird to see some patterns from the past. One thing I've personally noticed this is the presence of Lincoln's Sparrows way more than I've ever seen in winter, but that's just personal experience. I've been meaning to check ebird to see what the data says. Maybe I'll post on it later.

This CBC was a blast and I'm looking forward to helping it for years to come. The city of Park City wants to get involved more so I'd expect us to have a much bigger event next year!

I am from San Diego but will be in park city this week. Any suggestions about where I should go birding?

@Mr. Reyes: If you can get away form PArk City it's more ideal birding in the Great Salt Lake Basin right now. Park City in winter doesn't offer a lot of great birding. Mostly feeder birding in some of the subdivisions, like Summit Park. Email us at utah.birders@gmail.com for specifics.

Have you seen our friend the Chickadee? No fee- bee sound in the mornings, sad face.
Just a whole bunch of Eurasian Collared-Doves and Magpies beinging bullys at the bird feeders. I think the Chickadees, finches, jays and other winter Park City Utah birds are being run out by these two.