Survival of an Eagle

This was on CNN's home page tonight, "The resilience of a burned baby golden eagle that survived a Utah wildfire is astounding wildlife rehabilitators nursing him back to health."

Check out the story about a Golden Eagle chick that survived the dump fire in Utah County and is being nursed back to health at the Wildlife Rehabilitation Center in Ogden. 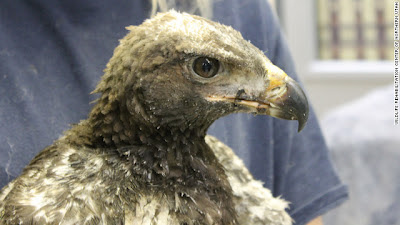 This young Golden Eagle, nicknamed Phoenix,
is being cared for after suffering burns from a wildfire
south of Salt Lake City in late June.

It's amazing to hear such a great story come from such a tragic event.  Given the 1,000's of creatures that didn't survive, this bird is lucky to be alive, and at least in my opinion shows there is some hope despite the numerous people that just don't seem to care about how what they do effects the world around them.

And kudos to Kent Keller and Wildlife Rehabilitation Center!

That truly is amazing.