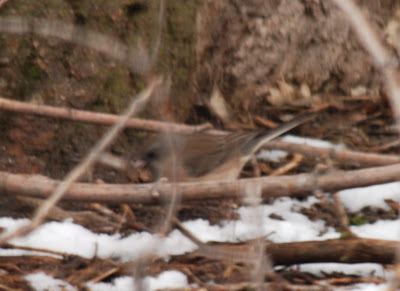 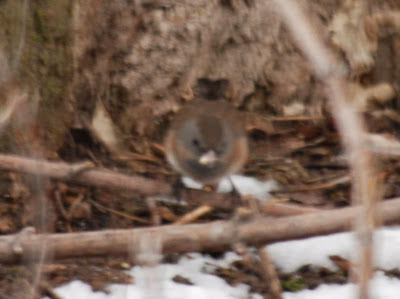 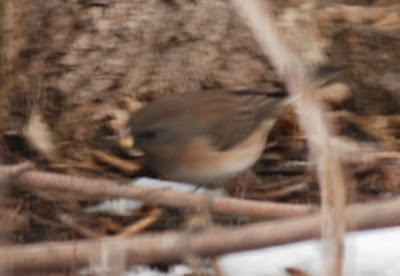 This afternoon I photographed an interesting DARK-EYED JUNCO in my yard in Logan, Cache County, Utah. The bird had most of the basic traits of a female Oregon subspecies Dark-eyed Junco, except for a few anomalies. Most obvious was a soft-edged buffy malar ("mustache") stripe that matched the flanks in color. I grabbed a few quick photographs through the window, but could not relocate the bird when I went outside to try for better photos. In the photographs, I noticed that the bird also has a hint of a pale supercilium ("eyebrow"), a slightly more striped back than expected (although perhaps not entirely outside the range of variation for a pure DEJU), and the white in the outer tail feathers appears to not reach the tip of the tail, instead fading to black.

The combination of anomalous traits make me think this is not just an aberration, but more likely a hybrid of some kind. Hybrids between DEJU and sparrows of the Zonotrichia and Melospiza genera have been previously reported. It seems to me like the best match for this bird would be a Dark-eyed Junco x Song Sparrow hybrid, a combination which has been reported before. (For example, here is a link to a possible photo of another DEJU x SOSP hybrid, and here is a link to an article describing another.) It is my opinion that the only way to be 100% certain of any hybrid parentage is with genetics, but I think this is the most likely explanation for this bird based on the traits observed, the frequency and range overlap between the species in question, and the fact that hybridization between these two has been documented previously. The Song Sparrow-like traits are pretty weak on this bird, so a backcross (the offspring of a mating between a pure DEJU and a DEJU x SOSP hybrid) also may be likely. Any thoughts or comments on this bird are welcome.

Cool bird! Sucks it disappeared before you could get more photos! I can't comment on what the other parent is, but I think Song is as good of a conclusion as any. It seems like most Zonotrichia hybrids have some sort of stronger facial or throat markings, and I've yet to see and White-crowned or Golden-crowned hybrids really documented. I think regardless this is a hybrid, but determining that other parentage may be difficult. I'm interested to hear what others think.

What about Junco x White-crowned, or White-throated?

There have been lots of examples of DEJU x White-throated, but all of them seem to have white throats, which this bird did not. For example:
http://www.carolinabirdclub.org/gallery/Budnitz/deju+wtsp.html
http://www.flickr.com/photos/jerryting/5145325024/
http://www.birdfellow.com/journal/2009/09/06/probable_dark_eyed_junco_x_white_throated_sparrow_hybrids
White-crowned Sparrows don't really have a pale malar like my bird had. But who knows - all kinds of unexpected traits can pop up in hybrids. So, I can't say I'm sure it isn't a cross with one of those, but I thought SOSP was more likely because it does have both a pale malar stripe and a pale supercilium.

I didn't see the bird in the yard this morning but I am keeping an eye out and will get more photos - maybe even a sound recording - if I can.

The only thing bugging me...is it definitely a hybrid? I'm not well versed on these and admit ignorance. I tend to speak too soon and be confused on some birds, especially songbird hybrids.

@Jerry: I can't speak for others, but in my opinion this fits in the hybrid category for a Junco. The amount of streaking in the back, along with the demarcation in the head pattern points to some other parentage--along with the Junco. Like I mentioned previously, I would have a hard time actually putting a name to the other parent based on the field marks--and without close examination it's about impossible to be positive.