So I decided to start a feature to make sure I was writing something new every week, regardless of anything else I blog about. To do so I am introducing the “Species to See” which I will post each week. The idea being to talk about and share information about a particular species of bird worth going to look for this week. Along with a little information about the species, I will add in where I would go if I were to be looking for it. So without further ado let’s kick this off. 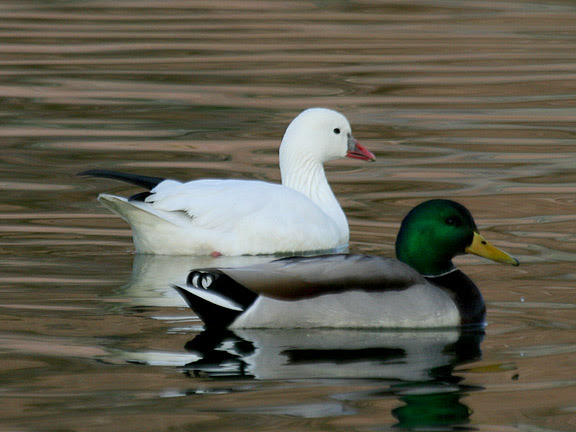 Ross's Goose with a Mallard for size comparison
I decided to start with something obvious, and something that is fairly easy to idea, and something that is only reliably found for about a month every year in Utah. The Ross’s Goose is a passage migrant that if you read Carl Ingwell post “White Geese” you would know pass through in the fall but usually aren’t seen because they tend to migrate south with fewer stops—but in the spring have two major staging areas in Utah. His post in particular was about Snow Geese; but with the Snow’s come a good number of Ross’s mixed in. From the middle of February through the middle of March is your best chance to find these birds, at one of two reliable locales. The first is near Delta, Utah which by now is usually “goose-less” (if not now in the next week). The location I am going to talk about is further north near Corinne, Utah just west of Brigham City, where the geese stage for a 2nd time before leaving the northern part of Utah on their northward migration. 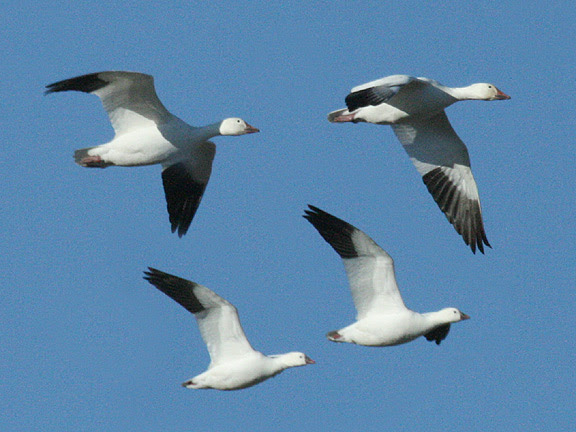 Snow above, Ross's Below near Corinne, Utah
Now Ross’s Geese are seen sporadically in the fall, winter and spring either alone or in small flocks at random locations. This is hit or miss on actually seeing them, which is why when they come through en masse it’s a good opportunity to see one (or 500) for the year.

After the Snow Goose Festival the geese abruptly leave and start showing up in the fields just north of the Great Salt Lake and Bear River MBR. They are usually here for a week or two before continuing, but it varies depending on the weather and food conditions. The upcoming weekend has in the past been a great time to head to Corinne to see the spectacle, a little bit closer and easier to get to than Delta. One place that has been good in the past is 6800 West and 1800 North. It may vary from year to year, so a little searching may be needed. And it is pretty much impossible to miss the birds once you find them as there could be anywhere from a few thousand to 10 or 15,000. 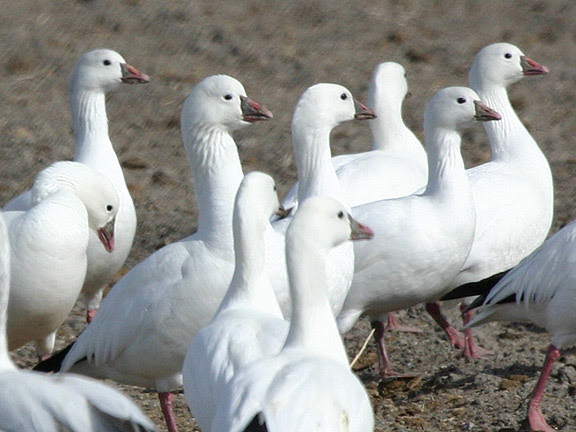 Ross's Geese feeding near Delta, Utah
Separating a Ross’s Goose from a Snow Goose may leave some people biting their nails, but it’s an easy ID. With the large flock you are going to see noticeably smaller geese. When you see these look at the bill and see if the base is a mostly straight vertical line or slightly bowed. If it’s mostly straight you have yourself a Ross’s Goose, if it’s bowed you don’t. See below: 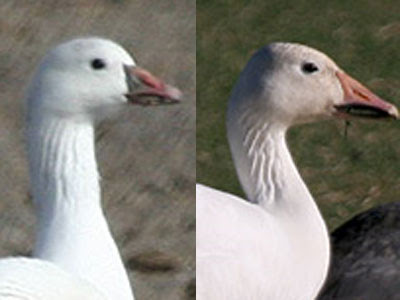 Ross's on the left, Snow on the Right (not the base of the bill)

There are definitely some Ross's with more curve at the base, and some Snow that are flatter than others. If all else fails, side by side comparison should be enough to help narrow it down.

I didn't even know about this other location. I have always driven all the way out to Delta every year to go see the geese. I guess I know where I am going birding this weekend! Thank you!

@Rick: I think the lower mandible is covered in dirt (That is the bird in the back left of the 3rd photo down foraging in a dirt covered field). That picture shows a pretty rag-tag group of Ross's which seems to have quite a wide variety of "grins". I know that a lot of people use that field mark, but I've always found it to be highly variable (with or without the dirt).

Now that being said, I am open to you telling me that whole flock is Snow Geese and I've been living a lie since 2006 :) - what do you think?

No the bird in that picture consistently show the "warty protuberences" near the base of the bill, another Ross consistent field mark. I've scope a lot of both in my time and that is highly correclated when visible.

There was a single Ross's Goose at Seigmiller Pond, St. George on Sunday afternoon. A beautiful bird indeed!

There is a lot of mud on that bill, so I couldn't say for sure that the grin is outside the range of apparently pure Ross's--just struck me as pretty conspicuous. One thing I'd note, Jay, is that I have seen plenty of birds with long bills, big grin patches, a n d warty bill bases, suggesting that that character can appear in apparent hybrids, too.
All this said, I think sometimes that we (meaning I!) look too hard at white geese, finding hybrid characters where we're really just seeing variation in Ross's. Anybody else have that sense, too?
Tim, when are we going to get to bird together again?

@Bill: The Springs Estate Pond (also known as Seegmiller Pond) has had between 1 and 3 Ross's hanging around this winter. I got some great shots of one there in December.

@Rick: To be honest, I have not spent a lot of time looking closely at these birds for Hybrids. Especially when we get the huge flocks. I am more in awe of the sheer number of birds than the close examination--which is funny because with Gulls I am the exact opposite.

Anyways, like I said, I have always found that within Ross's there seems to be a high amount of variation on those bills when I have looked at them.

As for birding together, I really need to get down to Arizona again--it's been way too long and I still have a handful of specialties to pick up. Or if you're ever in Utah, you can always shoot me an email!