Let’s Call It a Smallout

As birders we hear the word fallout and immediately start drooling about the possibilities.  It’s an event for birders, like the Kentucky Derby for Horse Racing enthusiasts.  Like a meteor shower to amateur astronomers.  Or like Halloween for Trick or Treaters.  Okay enough with the stupid comparisons.  A fallout is something that once experienced makes all other days of birding seem somewhat mundane.  Expectations of migration can become too much, turning the most avid birder into a Grinch when they find their local trap not producing the way a fallout does.  For most of us though, they provide some of the most exciting migration birding around. Over Memorial Day weekend Utah experienced what I would call the single greatest fallout of the last decade.  I can’t recall one that was more productive, turned up more rare birds, and left many of us in awe of the sheer number of birds seen.  I have a post for that coming soon.  But when it comes to fallouts there are different levels and this morning I came up with a term to describe a mild or very location specific fallout—the “smallout”. 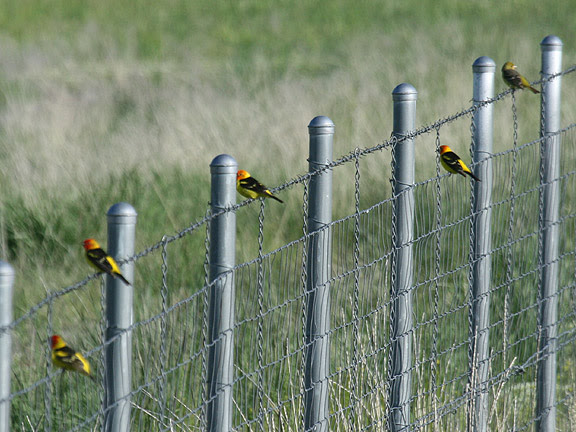 Western Tanagers dripping from the fence at the Provo Airport
during the epic Memorial Day 2011 Fallout.

Like many other September weekend mornings I started the day at the Salt Lake International Center.   Looking at the radar last night there seemed to be an interesting migration happening. A storm front passed through northern Utah during the night, and as it did migrants took to the sky right on its tail.  There were not a ton of birds over Utah, but Idaho and Nevada seemed to be getting quite a bit of activity in the skies, so I hoped that might be a good sign. Since 2007 the International Center has been one of the most dynamic and interesting migratory hot spots in the state of Utah.  Few birders tackle this beast as it isn’t the typical birding locale.  It takes some patience to go birding there, and you have more than a few disappointing outings.  But what it lacks in consistency from week to week, it makes for in what have been some amazing finds, and a list of over 150 species recorded in just these past 5 years.  Well anyways, the day started with Jeff Bilsky and I making a stop in the southeast corner where we saw exactly zero migrants.  A few starlings, ravens, and finches were there, leaving us thinking it was going to be another miss day.  Our second stop was at the far south end of the complex on Charles Lindbergh Drive.  This area has been a fairly productive location in past years, including a large flock of warblers here last year that was accompanied by a YELLOW-BELLIED FLYCATCHER.  But alas, today we had no such luck.  4 Western Tanagers and a Wood-Pewee were nice to see, but pocket change for this locale. 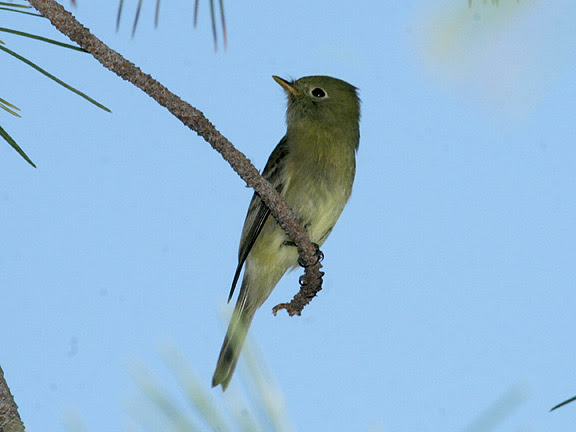 Our third stop took us to the heart of the IC (short for International Center), the T-intersection of Lindbergh, and the main east west thoroughfare—Amelia Earhart Drive.  This is typically the best place to look around.  Usually you will find something here even when the rest of the place is dead.  Today, it was well… dead.  We found one Cassin’s Vireo, my first for the year, and an appreciated late comer to the migration party (most have passed through by this point). We saw a few Yellow-rumps flitting ins some trees a ways down the road to the west, so we hopped in the car and drove to the KJZZ building on the edge of the north pond—when the “smallout” hit us.  It went from zero to 60 in a matter of minutes; there were more birds than eyes, more species than fingers to count them on.  The movement made it almost impossible to keep track of what you had seen, what you were seeing, and what you might have just missed.  It was chaos… It was pleasure… It was the “smallout” of the year.

What was supposed to be an hour or so at the IC turned into madness.  Following roaming flocks of warblers trying to pick everything else from the majority Yellow-rumps. Right off the bat I saw the bird of the day for me; a first winter CAPE MAY WARLER.  When I first saw it all I knew is it was slightly smaller, and sleeker than the nearby Yellow-rumps, and Cape May was what I was hoping for.  But the pesky bird didn’t want to hold still.  It was in a foraging frenzy.  This was life or death for that bird; 1000’s of miles from its traditional migration path (even though this is its first trip south, it sounds better that way), in a barren desert (freshly wet from the deluge the previous night), it was on a mission to restock its energy supply, and it didn’t care who was trying to see it.  Meanwhile Jeff had wandered around the corner out of sight.  My yells were not prompting his appearance and I was beginning to worry the bird would disappear.  I wild flung my camera up at the trees and started shooting every bit of movement I saw.  I needed a photo if it was what I thought it was.  Several times I caught glimpses of the bird as it darted form conifer, to Russian Olive, to Cottonwood, but never long enough for the look I wanted.   Later pouring through 50 or 60 blurry, poorly lit shots, I found the golden goose egg—the shot of the bird in its pretty plain and drab glory.  It isn’t a beauty, but it sure is a fantastic bird for Utah. 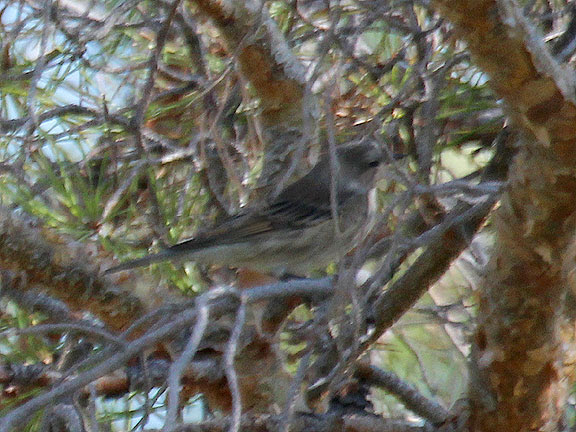 Cape May Warbler at the IC

From there we made our way west along Earhart through a line of trees.  It was crazy birding.  We quickly lost count of what we were seeing, 6 species of warbler, maybe 7, or was it 8… It was hard to keep track.  A Nashville here, two Townsend’s there, a flock of 6 Wilson’s in that tree.  There goes a Warbling Vireo, a couple of Yellow Warblers chipping from nearby, and Orange-crowned Warbler here and there—what’s that, it’s a Sparrow, but what kind!  Is it a Brewer’s?  Maybe a Chipping?  Wait, it’s a CLAY-COLORED SPARROW!  This species has turned into an annual find here in September, and this year would be no different.  For Jeff it was a lifer, which gave us beautiful looks for a few minutes while it fed in a Russian Olive.  The birding continued… 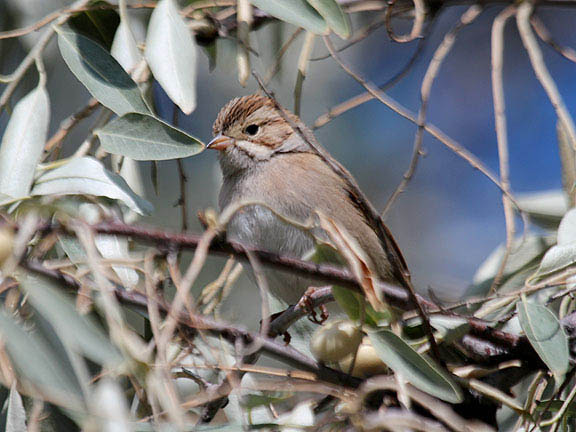 Clay-colored Sparrow at the IC

Across the street more warblers, another mixed flock, this one made up of all the previous species (minus the Cape May). Then a streak of yellow through the tree in front of me, I catch a glimpse of white undertail coverts and I reach for the camera.  I snap a couple shots not sure if I got anything, the bird was moving quickly through the trees in front of me.  I hollered to Jeff that I thought a TENNESSEE WARBLER was in the tree.  He thought he’d seen the same.  Frantically looking we couldn’t find the bird.  Later a photo would confirm the sighting, white undertail covers and all! Tennessee Warbler at the IC

We were back to where we started but not anywhere near done, we started the whole loop over again and spent the next hour pouring through the birds again, adding more individuals but not new species.  A few nighthawks flushed from a tree we passed a couple times previously, and a pewee popped up for good measure.  Before we knew it 2 hours had passed and we had been in the same 100 yard stretch of trees.  This was by all definition a fallout, but it was so localized I felt a “smallout” was a better fit for the occasion.  Elsewhere at the IC we didn’t encounter anymore flocks, or anymore great finds.  It was rather dead as with the first couple stops we made.  It made me wonder what would have happened had we skipped that street today, or birded elsewhere first.  Would the results have been the same, would the birding have been so incredible? It’s hard to say, but I sure won’t forget the great smallout of September 2011 at the IC, it was a good day to go birding.

Pictures from today's trip will be available for a couple months at the following link:
Click Here

@Jerry: I'm glad you like it. It took every ounce of my brain power to come up with that one!

We weren't sure what it was, but May 21, 2011, the Mount Battie Motel, Lincolnville Maine experienced a huge number of birds all over the property. We were told it was a fallout & that they will be back again this May 2012. We are looking for help as to how to prepare for it. Please advise. mountbattie.com