My Biggest Utah Birding Day Yet

Just about 2 weeks ago, I joined Tim Avery and Jeff Bilsky in one of the most memorable day of birding in my life when we attempted to break the Big Day record for Utah which currently sits at 202 set by Mark Stackhouse, David Wheeler and Colby Newman. Having only lived in Utah for about 6 months and currently witnessing my first Utah migration I was definitely the weak link in the group but I did my best to increase my birding skills. I studied my bird books to learn more about the birds I would be seeing for the first or almost first time and studied the songs and calls by listening to playlists at work (luckily I was wearing headphones to avoid funny looks from coworkers).

We headed out from Salt Lake City the morning before we were to attempt the big day to do some scouting. The scouting proved productive as we got an idea if birds were present at a given area or if we needed to scrap that area due to lack of target birds. We could have used some more time scouting but we had to work with the time we had and hopefully next year we can have at least 2 days for scouting. Big thanks need to go to Tim who had already done extensive planning on what our route should be and had multiple options for each species. This gave our route some flexibility and helped in the long run.

By the end of the day we found ourselves down near the entrance of Zion National Park hanging out in a gazebo. Despite it being dark already we got to watch bats skimming a pond, listen to a Yellow-breasted Chat calling nonstop and I also finally heard my lifer Western Screech-Owl. We had a few hours to sleep before midnight and the start of the big day, but unfortunately none of us could fall asleep. We were too excited for the big day and after having birded all day, we couldn't turn off our brains as birds were still calling especially that noisy chat! So it ended up that none of us got any sleep that night. 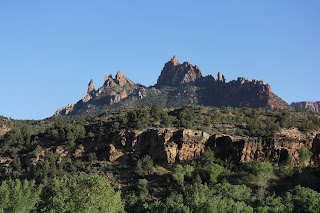 At 11:45pm we headed to the Zion Visitor Center to start our Big Day off with a Western Bluebird we had seen there earlier in the day. It would be a good bird we would have trouble getting later in the day, so as the clock struck 12:00am we tried for the bird.... and nothing. It wasn't there a few hours later. Not a good omen for day. Downtrodden we went for our next species, Rufous-crowned Sparrow, and this bird cooperated. Almost too well as it came inches from flying into Jeff. We were on the board! Next we got that annoying chat who wouldn't let sleep (wouldn't it have been ironic if he had stopped calling at midnight!) and we headed out of town towards St. George.

There we picked up some more night birds- rails, moorhen, Burrowing Owl, a Lesser Nighthawk going after insects around a light pole along with the ongoing Snow and Ross's Goose. It was very interesting to be birding in the middle of the night, trying to pick out distant calls as the rest of the world was sleeping. But we started noticing some things that ended up causing trouble for us later in the night. First was that the wind was picking up. The forecast had shown that the wind was supposed to die down during the night, but if anything it was picking up and was going to make hearing birds much more difficult. Second was that the moon wasn't up yet which seemed to limit the number of birds calling at night. 2 factors we couldn't control but that would factor in the day. We would continue looking for birds in the night but we weren't finding the species we were expecting and some of us (ok, me) we having trouble staying awake in the car despite help from my friend coffee.

Next stop was Beaver Dam Slope and Lytle Ranch where the sun would finally come up and let our eyes start doing some of the work. This was my first time at Lytle Ranch during migration and I was impressed, even if Tim and Jeff said it wasn't even a great day for birds here. We picked up a ton a birds here, but we still missed on many empids and sparrows. It was amazing for me to see many Western Tanagers here and many other birds visiting one particular mulberry tree. I wish we had all morning to bird the place, but we were on a schedule and had to push on despite missing some species we could have gotten if we had more time there. 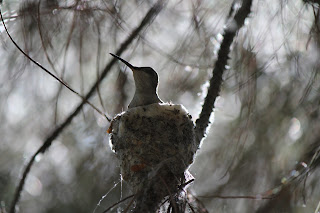 As we headed to our next big stop at Oak Grove Campground, we knew we were down about a dozen species from our pace and would have to get most of the expected species from there on out to have a shot at the record. The scouting at Oak Grove the day before proved useful and we got all the species there we had the day before including such notables as White-breasted Nuthatch, Pygmy Nuthatch, and Grace's Warbler. After this stop it was time for the long trip north. You would think that this would the time to relax, but we still had to look for birds like falcons and hawks as we headed north so we had so fight through our exhaustion to try and focus on finding birds.

After a few hours on the road we hit up Chicken Creek Reservoir which proved to be great in terms of waterfowl with 13 species of duck (including  Blue-winged Teal and a Bufflehead we didn't have the day before), 4 species of grebe and 6 species of shorebird. This got our hopes up that we still might have a chance but we realized that we needed to get just about every species at a given site to break the record. We got back on the road towards Farmington Bay and Antelope Island Causeway and thanks to Tim's route we managed to avoid rush hour traffic that would have taken away precious minutes in our day.

Farmington Bay held some species we needed and a few surprises. One was Wood Ducks that we hadn't had anywhere in our scouting the day before and thought we would miss. Another surprise was a Prairie Falcon hunting some shorebirds. We had paid attention the entire ride up north and had not seen a single Prairie Falcon, but here was one finally.

Still feeling confident, we headed up to Antelope Island Causeway which would end up making or breaking our big day. We had read reports of Ruddy Turnstones, Whimbrel and Sanderlings there which would be a big bonus for us. We ended up with 16 species of shorebird but we missed some species we had hoped to find there- Semipalmated Plover, Snowy Plover, Red Knot, and yellowlegs.

At this point we came to the conclusion that we had been facing most of the day since we left the south- that we wouldn't be able to break the record. We had just missed too many needed species and we were running out of time. We decided that we would keep on getting some species and not kill ourselves for the rest of the night. At this time we all had been up 36 hours and were exhausted and I had to be at work at 6 am the next morning so I didn't mind taking things a little easier even though it would be for disappointing reasons.

We headed up to Williard Bay and picked up California Quail and Osprey then turned our eyes to the mountains. Initially we were going to head to Logan Canyon but we decided to scrap it for Big Mountain and East Canyon Rd which would be closer to our homes in Salt Lake City and give us a chance to be in bed by 11pm. Ultimately we found ourselves up in the mountains listening to Flammulated Owls around us and looking for Ruffed Grouse drumming nearby. For the first time all day we had some free time and it was nice to get to be able to bird at our own pace and actually enjoy the birds we were seeing and hearing and relax. It was my first time ever hearing Flammulated Owls and I loved the experience. 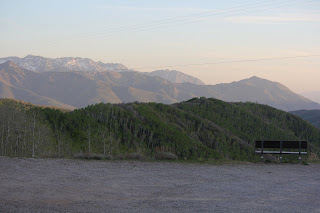 In the end, we ended up with 179 species which ties us for the 7th best Utah big day. We managed to stay up 40 straight hours. Tim did an amazing job planning the route and driving the whole time. I know Jeff and Tim were a bit disappointed that we didn't do better, but there was no way that I could be disappointed in the day I just had. I had managed to pick up 11 lifers (Common Black-Hawk, Western Screech-Owl, Flammulated Owl, Common Poorwill, Brown-crested Flycatcher, Dusky Flycatcher, Gray Vireo, Lucy's Warbler, Black-throated Gray Warbler, Hooded Oriole and Black-chinned Sparrow)! I also had an amazing 54 species that were new to Utah for me.

I don't think any other Utah birding experience will be able to top those 2 days given all of the new species I had and just the completely new experience of trying a Big Day. It is completely different from any other birding I have done. It's unfortunate that you can't give the birds the time they deserve and it is a challenge pushing through the physical and mental exhaustion but I enjoyed pushing myself to the limit and still birding and having fun with my two other co-big dayers. Also each new species you find gets special meaning, especially as your time is running out. I was more excited about the American Crow we found in a gas station parking lot near Antelope Island later in the day than just about any crow I have seen before.

Everyone should try a big day for the experience, even if it isn't a full Utah big day. You could do a big day for a county or even a Big Sit like was recently done at the Great Salt Lake Birdfest. Just see how many birds you can get in a given place in a given day. It's fun working as team to find species and making even common species special. I know I will be trying another one next year. Will you?

I was routing for you guys all day. Sad you didn't make it, but try, try again!

Kenny, Great post my friend. It was a pretty epic day even though we didn't end up setting a new record. But hey it was our first shot, and with what we learned this year we can surely do better in the future with a little more planning and a some scouting. This was also my biggest day birding in Utah or anywhere else for that matter so no complaints on my part!