Not a lot happening the last week at night.  There have been a number of storms pushing through and migrants have been hit or miss.   I did find a few great images worth taking a look at.  The first is from last night: 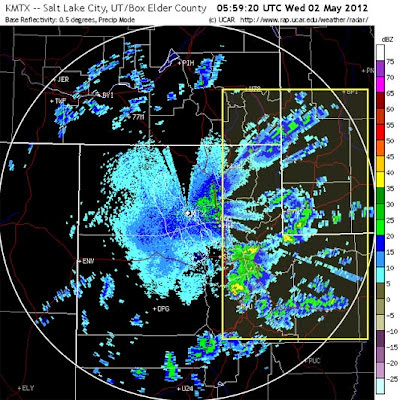 This was taken just before midnight last night--the yellow box shows a storm that had just moved across the lake and Wasatch Mountains.  What followed was a great night of spring migration in Utah.  You can see the green patch just to the right of center as with past nights this has been the route of the heaviest concentration of migrants.  Taking a look at the velocity image that corresponds you can see the opposing movements of the birds and the storm: 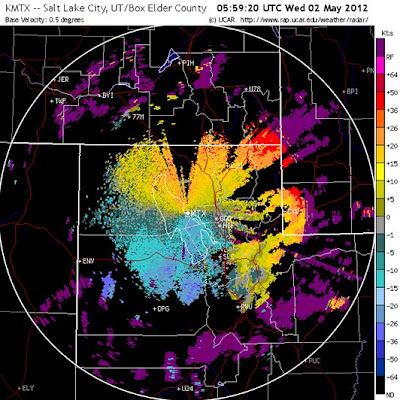 The storm was moving east north-east, while the birds were heading north.   If there were only birds or only moisture, usually the velocity shows everything moving one direction.

Finally a couple nights ago (April 29th at 11:58pm) there was a big push of migrants out of the southwest.  I took a screenshot of the region covering the southwest to show something: 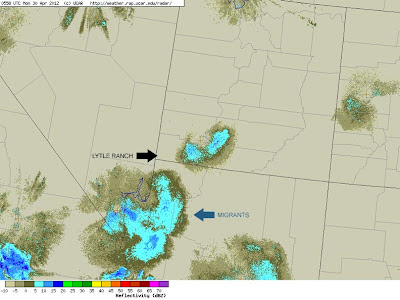 The patch marked migrants is from the radar in Las Vegas.  The patch to the north of that and to the right of the arrow pointing out Lytle Ranch is from the Cedar City radar.  The reason I am showing this is to point out why the west desert and southern Utah migrant traps are so phenomenal for migrants and often vagrants.  Birds leaving out of  southern California and Arizona--making their way north out of Mexico that make their way up the west half of Utah don't have a ton of options for places to go during the day.  When first light hits these birds are going to start looking for places to refuel.

The heavy concentrations of birds to the south of Lytle are going to end up dumping lots of birds into that area, and other  areas in the West Desert.

Keep in mind this isn't every night.  I noticed this as I was checking the previous nights when I was camping on the Beaver Dam Slope to see what was moving--and the radar barely showed anything.

The next couple days are going to bring a mix of clear nights and stormy nights.  It will be interesting to watch the radar and see how and when birds start and stop moving based off the storm fronts as they pass.  I will have a few more updates on nocturnal migration through the middle of the month then I'll give it a rest at least till the fall (probably).