Wait, those are different species?

As I have made headway in learning many of the birds of Peru while planning for my upcoming trip, I have come across a few groups of birds that have left me scratching my head.  Within so many of these families of birds there are plenty of groups where 3 or 4 similar species exist.  Some are so similar that identification without an audible are probably impossible.  One such group that has caught my attention were the Cercomacra  Antbirds.  Within this group there are 2  sets of 2 similar species.  The Manu and Gray Antbird  are most similar to one another, while the Black and Blackish Antbirds are very similar to one another.  Take a look below--can you tell which are which, or which 2 are in the similar groups? 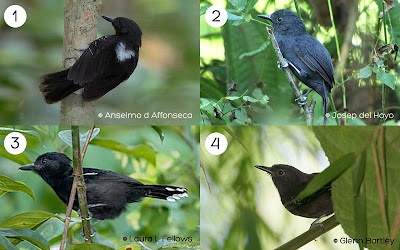 Easy right? It would help a little if you could see bird #4's back half--then you would be able to see that it has a similar tail to bird #3 with the white tips.  Birds #1 and #2 lack those white tail tips.  If you were to check out page 336-337 in Birds of Peru you would be able to see that the Manu and Gray Antbird have the white tips, while the Black and the Blackish lack white in the tail.

Now if you look a little closer (click on the picture above to see full size), you can see a major feature of each bird that can help separate the two within each sub group.  In each group one bird is more of a slate-gray while the other is more black. One might take that as the major way to group the two, but in this case it's not .

Bird #1 is a Black Antbird, and it is the "blacker" of the two dark tailed birds.

Bird #2 is the Blackish Antbird, the more grayish colored bird of the dark tailed group.  I bet that makes it easy to separate #3 and #4 right?

Since Bird #3 looks to be more black that would make it the Manu Antbird.

And lastly Bird #4 the grayish bird is of course the Gray Antbird.

All 4 of these species occur in the Amazon and could theoretically be seen in relative proximity to one another.  Taking the time to learn how to separate the 4 will save valuable time in the field, and hopefully keep me from having to go to the book--which I will inevitably be doing for plenty of other similar groups of birds.

Within the Antwren family for instance, there are several other small groups that have the same issue as above--I guess I need to nail all these down pretty soon!

Very interesting. Thanks for sharing.