My friend Shyloh sent me a photo ("click" to enlarge) today that reminded me of a post I was meaning to get to (too many to get to and not enough time). Check out the Cooper's Hawk sitting on its nest…it is in juvenile plumage, which means it was born last year. Many (but not all) raptors are sexually mature at this age and breed successfully. The first time I noticed something like this was about 22 years ago when surveying Bald Eagle pairs on the East Coast…although, I'm sure it had been documented before that. I witnessed a few eagle pairs where one of the pair was not quite in full adult plumage, having a dark tail tip and some dark on the head. Each time this occurred, it was the female that was the "non-adult." And this makes perfect sense since it is the female that chooses the mate. And would a female choose a young male or an adult male? It's a no-brainer, an adult is going to be chosen every time. In fact, I haven't seen a breeding pair of raptors where the male was in juvenile plumage, but if anyone knows of this occurring, let me know, because its bound to happen. It has been reported that immature male Harriers have helped adult males tend to a female with nestlings, but I can't verify that at the moment (not sure where it was cited). 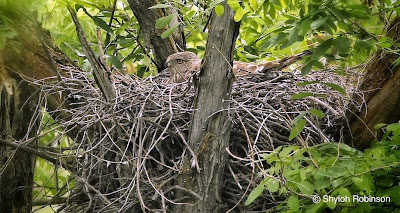 Anyway, check out the male in the second photo, he's in adult plumage, but still has a pale eye, which indicates that he likely acquired his adult plumage last year. Eye color is not always accurate to tell specific ages, however, males change eye color quickly, and a pale-eyed adult male is almost always one in its first adult plumage. This is definitely not the case with females though who can take years and years to get a red eye (and sometimes never do). Also note the gray cheek of the male, females can have grayish cheeks but it takes them several to many years to show that. So, this is an interesting pair;.a female in juvenile plumage and a male who isn't much older (most breeding males have dark red eyes). By the way, some of this pertains to my next post… 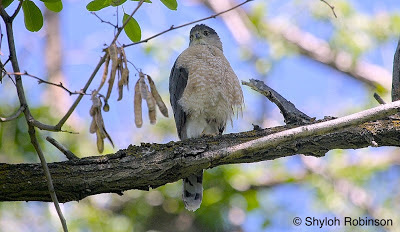 I can honestly say I've never seen a nest with anything other than adult birds tending to it. Very cool and informative, thanks for sharing!