Saturday, December 21st, the Utah Birders held our 3rd Annual Park City CBC.  This year 9 birders took part during the blustery winter day in Park City and unofficially tallied 52 species.  The day started with the group meeting first thing at Kneader’s in Newpark for a little breakfast, before we split into groups and headed out to scour the 8 sections of the count.  Four teams comprised of 2’s or 3’s headed out to the 4 main quadrants--City, Mountain, Canyon, and Lake to get the day started.

Kenny Frisch and I took the lakes portion of the count, which is mostly spent scanning the hopefully open water of the 2 reservoirs that lie in the count circle.  We started the day off taking I-80 east to Wanship to check the Weber River below Rockport Reservoir.  In Wanship a TOWNSEND’S SOLITAIRE was perched in the tallest pine in town.  At the river were numerous AMERICAN ROBINS and a few MALLARDS, but no other waterbirds.  3 MUSKRAT were sitting out in the open, while a BALD EAGLE flyby provided excellent looks.

Bald Eagles were prevalent this year on the count

From Wanship we headed towards Rockport where we had a NORTHERN SHRIKE just below the dam.  The reservoir was frozen solid so no waterbirds.  At the inlet we picked up an AMERICAN DIPPER, and a small flock of CANADA GEESE were the only for the count.  Above the reservoir we saw several BALD EAGLES along the river.

Next we headed over to Jordanelle to scan the north arm--if it were open.  Luckily it was and there were a number of waterbirds present.  Plenty of COMMON GOLDENEYE and COMMON MERGANSER.  Several GADWALL, LESSER SCAUP, and BUFFLEHEAD along with the usual Mallards rounded out our waterfowl effort.  We scored three species of Grebe with 5 WESTERN, a PIED-BILLED, and the best bird of the day, 2 very late HORNED GREBES.

The fog and snow made it difficult to san everything very well, but we figured we covered most of what was expected.  We were done with the lake pretty early, so headed over to Deer Valley Resort to check the ponds where a pair of BARROW’S GOLDENEYE were present with a Common Goldeneye and pair of Ring-necked Ducks.  We decided to run through South Snyderville Basin to check the warm springs, adding GREEN-WINGED TEAL to the count for the day. With some time left we made a quick drive north to The Preserve, but didn’t add any birds--just a couple of bull ELK.

Rocky Mountain Elk at the Preserve

Alex Peterson recaps the city portion of the count:

We left the morning rendezvous point and headed east along the I-80 frontage road (Highland Dr) and the Swaner Preserve watching the posts for raptors.  Right before we reached the Old Ranch Road turn, we were rewarded with an AMERICAN KESTREL swooping down on a vole and then enjoying its earned breakfast on a post right next to the road.  An amazing start to our Park City CBC--which we only captured with memories.  We then headed along Old Ranch Road, turning into the Trailside Drive neighborhood to observe some feeders.  Many feeders were empty or frozen over; but we found three terrific feeders that were a hot bed of activity.  Besides the innumerable doves and starlings, we were rewarded with both MOUNTAIN and BLACK-CAPPED CHICKADEES.  We also counted some Mallards in the neighborhood ponds.  Despite the usual odd looks from the locals, we braved onward especially after one gentleman rewarded us with a vigorous #1 sign with his middle finger.  With that encouragement, we then headed past Trailside Park and over into the Silver Summit area neighborhoods.  Again, many empty feeders, but those that had seed not only rewarded the birds, but also us with plenty of activity.

Heading back to Old Ranch Road we crept slowly along counting the water birds (mostly Mallards, but also American Coot, RING-NECKED DUCK, and the only AMERICAN WIGEON of the count.  We also found a number of raptors including RED-TAILED and ROUGH-LEGGED HAWKS on posts in the preserve.  Following Old Ranch Road to the end (and counting the chickadees on the way), we entered into the neighborhoods of Southwest Snyderville.  Regretfully only a couple of feeders in this area, but we continued to count the doves, magpies, starlings, robins, and mallards.  To finish our morning, we entered into the Canyon Resorts neighborhoods where we were rewarded with a WESTERN SCRUB-JAY and a friendly Canyon employee who kindly shared his diverse vocabulary and hand gestures when he was momentarily delayed by our bird counting efforts.  Not to end on a disparaging note, we also counted a BELTED KINGFISHER calmly perched alongside Hwy 224 by St. Mary's as well as a GREAT BLUE HERON.

We were given the mountain region and were tasked with finding as many species of birds as possible.  This sounds like a manageable task until you consider that we are fairly amateur birders that still have to reassure each other that we are, in fact, looking at a bird and not a bird stick or a bird tree or a bird rock.  But we set off determined to do all we could in the name of citizen science.  We headed first to Summit Park to see the infamous feeder off of Matterhorn Drive.  The owners of these several feeders, which gave me several ideas for my own yard, were very nice and even put out peanuts to bring in the STELLER’S JAY, among DOWNY and HAIRY WOODPECKERS, a NORTHERN FLICKER, both Mountain and Black-Capped Chickadees,CASSIN’S FINCHES, PINE SISKIN, and DARK-EYED JUNCOS. 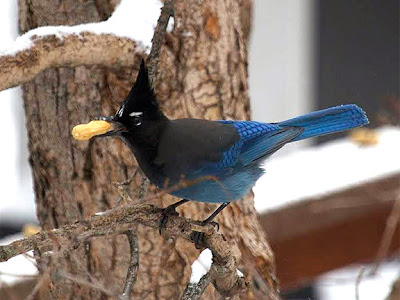 Steller's Jay from the mountain section of the count.

We moved on to Pinebrook and found one friendly Chicago couple with several feeders with more siskins and finches, but not much else movement.  Driving by Utah Olympic Park gave us our three raptors of the day, including a ROUGH-LEGGED HAWK and a SHARP-SHINNED HAWK along with an American Kestrel.  Moving southward on 224 to the golf course gave us some American Coots and some Common Goldeneyes.  All in all, we saw 18 different species and had a fun time reassuring each other that a robin was a robin and that we'll get better at IDing in the future.  Thanks to the crew for helping us with IDs and for a great morning of birding. 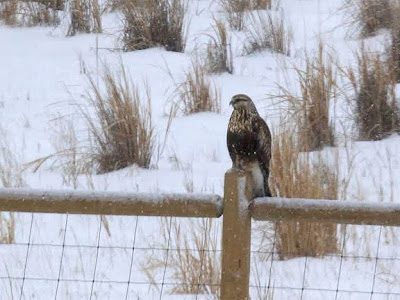 Rough-legged Hawk from the Mountain section.

The canyons group covered the area north of I-80, which this year didn't turn up a lot of birds.  In 2012 the feeders in the neighborhoods in this area produced some great finds--but with a typical winter it was quiet on the canyons front.

After the morning we met at the Cafe Rio in Newpark to look over checklists and see what we had missed in the morning.  Several participants had to take off, so we regrouped and as one large team decided to head back to Jordanelle where hopefully with more visibility we could find a few more species of waterbird.

As we approached the entry station, a COYOTE ran across the road in front of us and then along side.  The 4th mammal species of the day

Scanning the north arm from the parking area, we didn’t add any new birds but did find a 3 HORNED GREBE, and a BARROW’S GOLDENEYE we had missed here earlier.  Alex spotted a pair of BALD EAGLES  in the trees on a far beach that no one else was even scanning, upping our total for the day.

From the reservoir, we headed north into the developments on the northwest side of the lake.  There was a pond here we were alerted to by Nate who had seen good birds here in previous years.  On the way we had a mixed flock of RED-WINGED BLACKBIRDS and AMERICAN ROBINS, that also included one BREWER’S BLACKBIRD.  Along the road everyone in the group got great looks at our 2nd NORTHERN SHRIKE of the day.

At the entrance to the development we had a good view of a sliver of the reservoir that was open but had ice around the edge connected to the main body of the lake.  2 BALD EAGLES were sitting on the ice and in a tree here, while a huge flock of waterfowl sat in the small opening of water.  Scanning through them revealed 2 NORTHERN SHOVELERS, new for the day.  While we were there a flock of CEDAR WAXWING flew by, another new species for the day.

We made our quick stop at the pond Nate told us about, but didn’t add anything new for the day.  We headed back towards Park City--at the Silver Summit Exit, Kenny spotted 2 GOLDEN EAGLES in the distance, and the underpass housed a few ROCK PIGEONS.  We headed towards Pinebrook to check a  feeder out that Stephanie had told us about at lunch.  The feeder had both PINE SISKIN and CASSIN’S FINCH when we arrived, but not much else.  To end the day we headed to the feeders at the south end of Matterhorn in Summit Park.

As usual the birds were flocking.  New for the day was a calling RED-BREASTED NUTHATCH, and we did get “Oregon”, “Pink-sided” and “Slate-colored” Dark-eyed Juncos.  While we watched a new count bird flew over in a pair of CLARK’S NUTCRACKERS.  In all 6 ended up passing over while we watched.

As the count came to an end we all parted ways, excited about what we might be able to do next year in expanding the count and upping participation.  Our obscure count nestled in Summit and Wasatch County has a lot of possibilities--but it needs some love from the birding and local community to really help it grow.  We were excited to have 4 locals take part this year and share their knowledge of the area--if we can double that next year 60 species for the count could be a real possibility.

As usual we had our miss list, which includes some shockers:  Song Sparrow was perhaps the biggest miss, while White-crowned Sparrow still eludes us for the count.  No Ruby-crowned Kinglets or Yellow-rumped Warblers.  No Western Meadowlarks, and again no game birds.  No California Gulls, no owls of any kind, and no Killdeer or Snipe.

Sounds great! Some good birds in there. I was out of town or I might have helped out. Maybe next year.

@matt: Dude we'd love to have you out next year, the more help the better the count will be!