My original post on this subject had lots of nice color photos of Goshawks, and the B&W composite below, and I thought to myself -- why am I showing these color photos when the composite is the only thing I want to show? Goshawks are easy to identify in pictures showing all the field marks, but in the field with less than ideal views…maybe not so easy? Knowing how to identify Goshawks in flight is absolutely a matter of experience, there is no trick -- the more you see and study, the more familiar you become with them! But knowing the key ID traits helps speed the learning process.

The absolute #1 thing to look for is the shape of the wings. Goshawks have broad wings that taper toward the tips, and in some poses look like "broad-winged falcons", but in a soar show a nice angle where the base of the wings meet the hands. The tail is always long giving it that classic accipiter look! Adults are shorter-tailed but still look like the classic accipiter in most poses. The other trait that is important is the way they flap. Goshawks can flap their wings confusingly quickly (often smaller males), or labored and somewhat slowly (often larger females), but the wing beats are not snappy and weak (like Sharpy) or stiff (like Cooper's), but "fluid". I'm not going to say tail shape is useless, but it is far less helpful when separating them from Cooper's Hawks. Both can appear as "broad-tailed" as the other, but Goshawks vary more in regards to tail tip shape (rounded, squared, or wedged). Goshawks often appear slightly smaller-headed than large Cooper's Hawks, but male Cooper's Hawks after look tiny-headed.

Anyway, wing shape and wing beat are the keys to Goshawk ID in flight with less than ideal views! And here's a color photo of the juvenile plumage for those who want to file it. 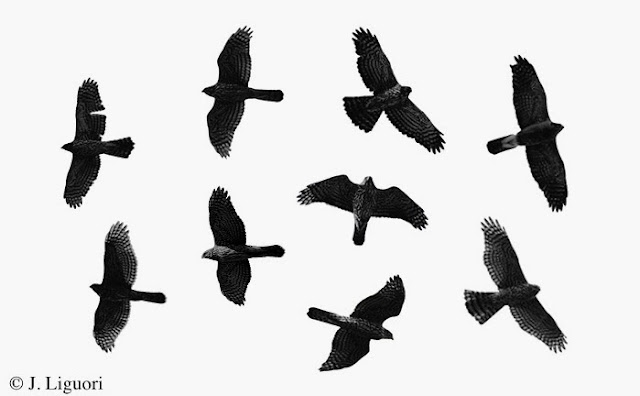