Two months ago we started looking at dates for this years Gullstravaganza.  Needless to say it was a busy winter and there were a limited number of dates open or that seemed like they would work best for our now annual outing--in it’s 4th official year.  We wanted to shoot for the latter half of February, after the carp-kill at Farmington Bay--it makes gulling easy and brings the birds in close.  But with other commitments and a lack of available dates we settled to have it in early January this year, not knowing how well we would do, we just hoped for the best.

A week before the trip 7 species of gull were reported at the usual Salt Lake County gulling hotspots--a good sign for us.  The bad part was only about a ⅓ as many people had signed up as the previous year--the early January date might have been a crowd killer.  But as the week went on the list grew and by 1:00am Saturday morning there were 36 names on the sign up--and we officially had “the crowd” we were hoping for.  And with such a group we decided to break out a special edition sticker for the trip as well as a new, 2014 Utah Birders Sticker! 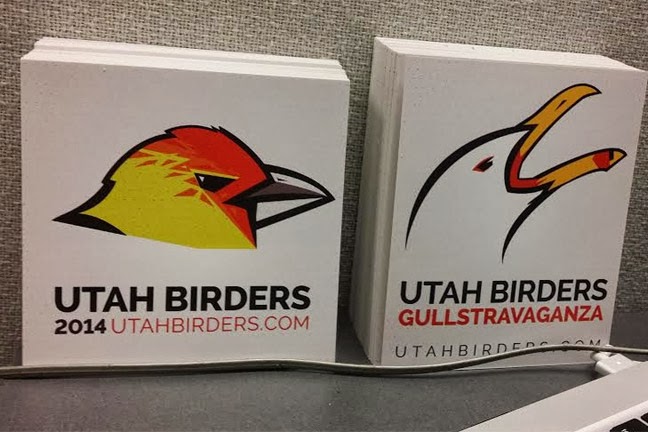 The 1st Utah Birders Stickers of 2014

Early on the the 11th, I met up with fellow trip leaders Jeff Bilsky, and Kenny Frisch to do our usual day-of pre-scouting.  We changed the format of the trip in 2014 following the lead of Colorado and their “Gullapalooza” trip, which happens in the afternoon.  Gulls after all are pretty lethargic, and don’t tend to move around too much, especially when feeding--so afternoons would be ideal.  Plus asking folks to stomp around in the snow and ice in the middle of January on a cold morning for gulls often seemed a stretch in my mind--if its even a few degrees warmer and people can get their day going the afternoon might work out a little better.

In any event we started our day with a stop at Decker Lake where there were few gulls and nothing noteworthy--we found a dead 1st winter Thayer’s Gull on the shore, not the best signs for a trip that looks for birds like this.  At Decker Lake we were shocked to find less than 100 gulls, making us wonder, “where were the birds?”.  As expected Lee Kay Ponds was frozen solid, and the although there was a HERRING GULL guarding a dead carp on the ice, the only other gulls were about 1,000 birds out over the dump.  A pair of PEREGRINE FALCONS were hunting the starlings over the dump as well, providing quite a show.

We made one last stop at Saltair, where again there was an obvious lack of gulls and anything noteworthy.  A NORTHERN SHRIKE near the entrance to the park was a nice consolation, but we were gearing up for Gullstravaganza--and there were NO GULLS!

We decided to drive to the International Center to see if there were birds there, but there weren’t--so we looped back to Decker Lake for one last pass.  Luckily some gulls had showed up here and a live THAYER’S GULL was present.  At Lake Park it looked like gulls were starting to filter into the main pond so things appeared on the up-and-up.  And Stephanie Greenwood was a big help, stopping by Farmington Bay to let us know that if all else failed there were a “few” gulls there, including some first year birds, which always make for a good time.

The group started rolling into the meeting location at Lake Park just before noon.  By 12:20pm we had 35 people and decided we had to move out so we headed to the main pond at Lake Park to see what gulls were there.  I guess the “pouring in” we saw a little earlier ended at about 200 birds, and by the time we got there, they were far out on the ice. We had to trek it to the west side of the pond and in the process lost 3 of our group to the cold and wind--I’ll be honest it was pretty miserable right off the bat.  Once in a great spot to scan from we quickly found a 1st winter THAYER’S GULL in the small flock.  Mike Hearell spotted a LESSER BLACK-BACKED GULL, and I picked out a 3rd winter WESTERN GULL, unfortunately the birds were sitting mostly and hard to pick out.  Every once in a while the birds would pick up and resettle further out, losing a few birds that flew off.  The Thayer’s flew right over, giving everyone a great look. 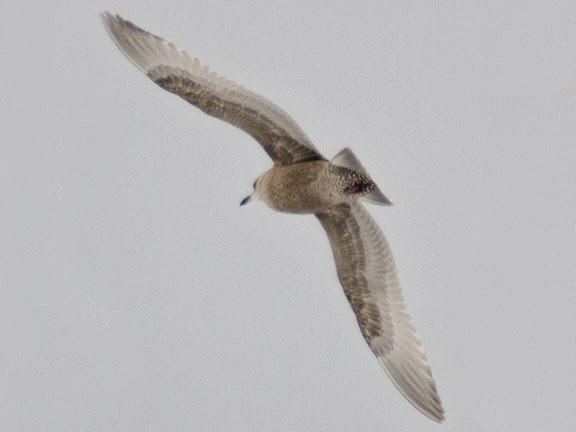 Aside from Gulls Jeff found 3 CACKLING GEESE here for an added bonus.  Back at the cars the three that left had their spots filled by 6 that showed up a few minutes late.  We packed back into the cars and headed towards Decker Lake where it looked like we might be spending most of our trip at this point.  Once there we scuttled everyone to the hill overlooking the east leg--on the north shore there was a guy with a pickup truck and the bed was full of loaves of bread.  He was feeding the ducks and gulls and the flurry of birds made for tough scanning.  That combined with a pair of PEREGRINE FALCONS that showed up and were putting on a show! 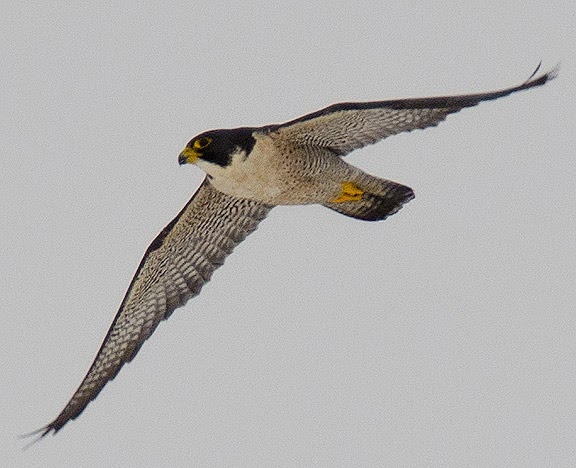 Eventually things calmed down a little and Kenny found an adult MEW GULL sitting relatively close to shore and we set up scopes for everyone in the group to see.  It was a lifer for a quite a few so that was exciting.  A couple times it flew and gave everyone great views in the air as well. 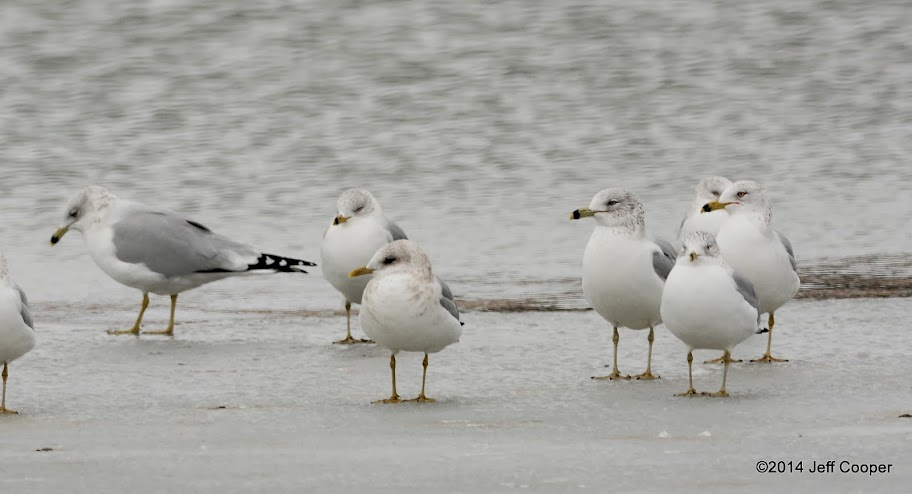 After a while our group who added one more with Jeff Cooper had exhausted the gulls here--despite around 1,000 gulls, there just wasn’t much mixed in.

We decided to offer to go up to Farmington Bay for those who wanted, as that gave us our best chance for more gulls.  Some of the group split off here and headed home--while about 25 continued on to Farmington to see what we could find there.

At the 4-way parking area at the end of the road we could see gulls to the south and east--but the “heat waves” coming off the water were distorting everything pretty bad.  What we could see is an adult THAYER’S GULL pretty close in, and to the east what looked to be an adult WESTERN GULL and perhaps an adult LESSER BLACK-BACKED GULL--but maybe it was just the lighting…

We started hiking to the east and pretty soon it was apparent that the bird in the distance was an adult WESTERN GULL and it was super cooperative.

We also verified the LESSER BLACK-BACKED GULL, but it wasn’t quite as close in. 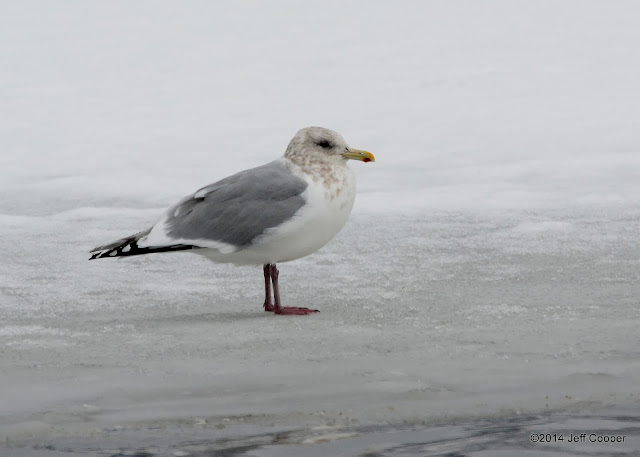 Further east we could see there were hundreds of gulls on a canal/stream where there was some open water.  We had to hoof it a ways but eventually got within 300~ yards and could scan fairly easily.  Some in the group had spotted another LESSER BLACK-BACKED GULL in the water which I found after a minute of scanning.  AS I kept going, I spotted another, and then another, and then another!!! There were 4 adult LESSER BLACK-BACKED GULLS on the stream!  Incredible.  But we weren’t done yet--on the other side of the road where the stream flowed to the other side there were more gulls.  Kendall Watkins spotted our second adult MEW GULL of the day, lounging with a few HERRING GULLS.  And just a hundred or so feet from it was yet another Lesser Black-backed Gull--6 at Farmington Bay at once, and 7 on the day! 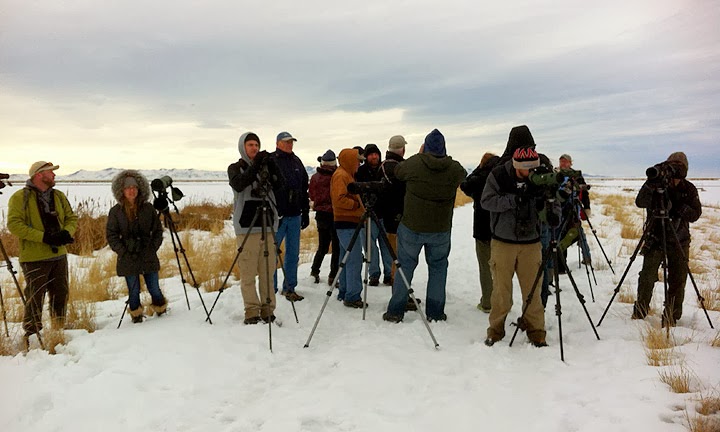 We spent a couple hours scanning birds until the cold started to get the most of us so we headed back in.  It was getting close to dark and the group had whittled to about a dozen of the craziest and die hard birders out there.  I applaud the entire group that came today--all 42 folks for putting up with the cold, the wind, and this big dude from Salt Lake who for some reason just can’t get enough of these gulls. 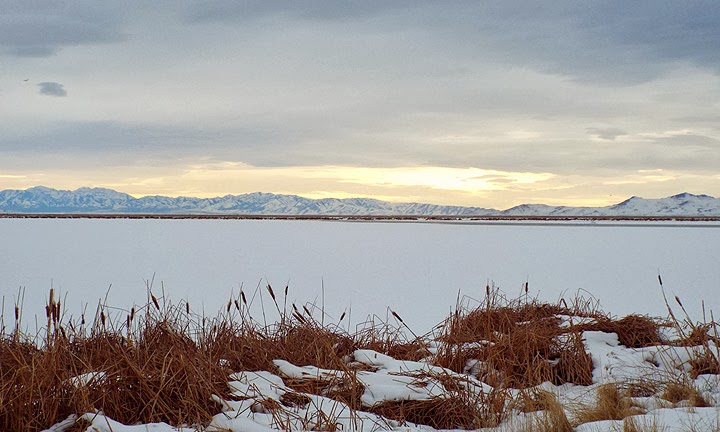 Just like that another Gullstravaganza is in the books.  This year beat our previous best of 36 birders by 6--something we still have a hard time contemplating, given its the middle of winter and we’re looking at gulls!  But it’s awesome and I thank those who came out to support this much underrated family of birds!  We had people from all over the state here this year.  The Allan’s joined us form Millard County while Kevin (I believe) from Torrey came a short 200 miles to take part in the trip.  There were birders from Cache, Weber, Box Elder, Summit, Davis, Salt Lake, and Utah Counties as well.  And there may have been other places represented as well.

In 2013 our 36 participants tallied just 4 species during the trip, and 4,500 individual gulls--and impressive number of birds, but depressing showing of species. After that trip, other birders added 2 more species at Farmington Bay where we didn’t go--so an unofficial 6 for the day of.
http://utahbirders.blogspot.com/2013/02/gullstravaganza-2013-recap.html

In 2012 weather put a damper on our trip, and only 11 people (of 27 expected) braved the miserable icy and rainy conditions, for 6 species of gull--the highlight being a Glaucous-winged and Lesser Black-backed.
http://utahbirders.blogspot.com/2012/01/gullstravaganza-2012-recap.html

In 2011 during our first official Gullstravaganza we ticked off 6 species of gull, when 24 birders joined us--the highlight was a 1st winter Iceland Gull which the entire group got to see.
http://utahbirders.blogspot.com/2011/01/call-is-gullstravaganza.html

Prior to when we called it Gullstravaganza, I led a trip in December 2009 where we had 7 species + 1 hybrid.  Before that we did 2 more gull trips, but I can’t find the lists for them or any reports.  What I can say is that since 2008 between 6 or 7 gulling trips in the winter we have tallied an impressive 10 species of gull in Utah.  The list would be stellar anywhere in the United States, but in landlocked Utah it’s even more impressive.  In all we also raised $150 in donations for Great Salt Lake Audubon.

For next years event we are going to revamp thinks a little more--as we do each year, and hopefully then we can finally have an 8 gull species event!

Here is a complete list of this years gulls:

Just wanted to say a had a very enjoyable time and look forward to next one!

We had a great time as well - thanks!