Something Peter Pyle wrote recently in Birding magazine gave me a good idea for a blog post. Actually, a few posts will follow on the subject, which I think will make neat lessons. Pyle was wondering if this adult male Harrier (image #1) could be sexed as a female based on wing shape [quote: "...could be an anomalous male or perhaps an older female, as also suggested by its broader wings and bulky appearance; females are larger than males in most hawks."]. This particular Harrier is in typical adult male plumage and is a breeding male (as the caption stated) paired with a typical female, so I can't find anything anomalous about this bird, and I can't find a reason to think this male would be a female (maybe the caption should have stated it was the bird on top when they copulated). I don't see this bird as "bulky" either, so I was quite puzzled by that quote alone. "Hawks From Every Angle" focuses on distinguishing the shapes of raptors in flight from all the angles, and "Hawks at a Distance" shows how to identify more distant raptors based on these principles. In these books, it states that male Harriers are shorter-winged and shorter-tailed than females, and hold their wings in a shallower dihedral, but Pyle's suggestion that females having broader-looking wings because they are larger birds is misleading, especially when looking at birds in photos. Be careful: males of several species have broader-looking wings than females, and all raptors appear stockier when seen from a side view (HFEA). Males and females of some species differ in wing beat, juveniles differ slightly from adults in shape on other species, and a so on...but accurately judging any of these differences takes years and years of field experience. For example: I categorized a distant melanistic (an extremely rare type) Harrier in flight in winter 2008 in northern Utah as a male based on shape and flight style (and banded primary tips identified it as a juvenile and not adult male). A melanistic adult male Harrier was found wintering south of Boise, ID four years later, and I believe it was the same bird as the UT bird. So did my experience pay off, or was it a different bird?

It is easy for anyone to make an error judging shape from a single photo. Photos can be deceiving since they are only a split-second snap shot in time. Often, a bird looks stockier, lankier, or more pointed-winged than normal in certain poses, and this is even exaggerated at times in photos. Here is an example: (http://jerryliguori.blogspot.com/2013/10/pointed-wings.html), and there are other examples of this topic on my blog. A bird such as a Harrier that is known for its narrow wings, can look stocky wing-on or change shape as it changes angles (images #2-7). In fact, the male (image #6) and female (image #7) look as stocky or stockier than almost any raptor in North America from these angles, but that doesn't make them Red-tailed Hawks (as an example) in Harrier plumage. Also, check out this Broad-winged Hawk (image #8), a species known for its stocky appearance that looks quite lanky in this instance. I just posted a quiz bird from CA with a similar theme: (www.hawkwatch.org/blog). So, be careful of judging single photos based on shape -- even well known birders such as Peter Pyle have made this mistake. With experience though, it becomes easier. 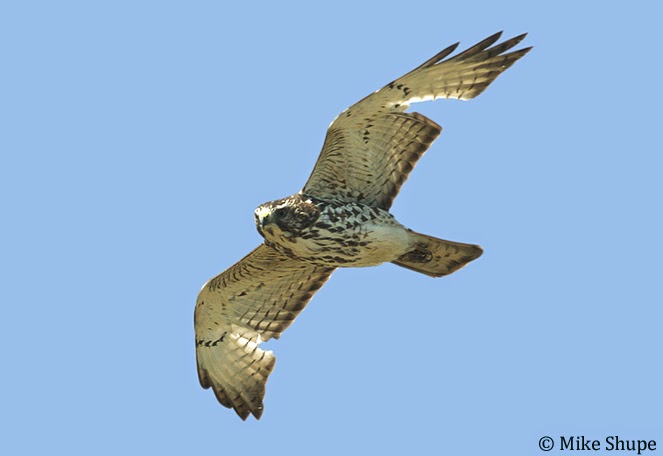