eBird and the Issue with Domestics

So I love eBird--you know this if you've read my posts in the past.  I have a few gripes with some things they do wrong--its a fact that the software is pretty amazing, but there are some very easy ways to make improvements that will give users much more control over how they view data.  One such improvement that I haven't spoken about in the past is the ability to filter out DOMESTICS.  Love them or hate them (I'm in the latter camp) I've never seen the point in having the ability to add domestic birds into checklists; and then display that data in search results and lists for locations.  Simply put the birds ARE NOT WILD!  They are not recognized as wild species, and in my opinion they clutter things up in the data.  Some people really seem to enjoy putting them on their checklists though.  As birders we know they occur and in general know where they occur.  So why put them on checklists?

I am having trouble finding eBirds official reasoning for this, although I suspect on some level it is because they do have an impact on native wildlife; and perhaps there is some interest in local populations of domestic fowl, etc.  So I can be okay with these being available as inputs on checklists and outputs in data.  But what I would love to see is the ability at a user level to either HIDE ALL domestics in submission forms and in output data as a setting.  If I could go in and switch a toggle that says I don't want to see this; for me personally it would be an improved experience.  There could also be the ability to filter them out in data outputs.  This is actually still my biggest gripe with species maps, lists, and other data outputs.  The general lack of filtering ability.  The filters they have set in place are location, season, and year based. All great tools. But more complex filters to hide or show "spuhs", domestics, hybrids, etc would be really useful when looking at output data.  Here is an example...

I pulled up the bar chart for the Salt Lake International Center.  Right at the top of the list we have2 domestics, then a either/or (that's like Ross's/Snow Goose). A few more down is another domestic, then a spuh.  All said the list has the 197 wild species + 22 "other taxa".  These others are the domestics, the hybrids, the spuhs, and the either/ors.  It's all valuable data, but maybe I am a purist and only truly care about actual wild occurring species.

Now to be honest this isn't a bad list by any means--197 to 22 is a okay ratio.  Let's look at a bigger less manageable list--the Utah statewide bar chart. 458 Species and 168 other taxa. 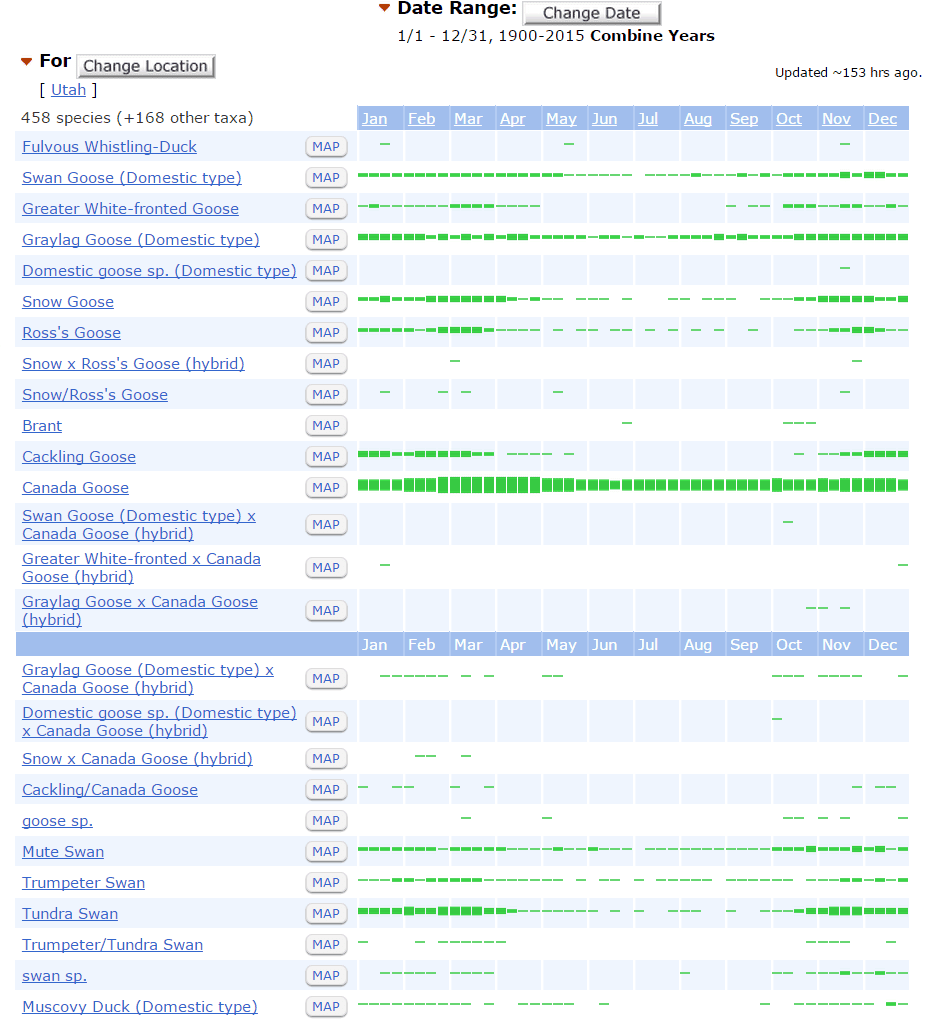 Out of the first 15 "species" line items, 8 are OTHER TAXA.  Now waterfowl in general is like this since there are lots of hybrids and domestics.  But going down the list, almost every section of 15 species has 1 of these other taxa. Gulls are particularly ugly as well! 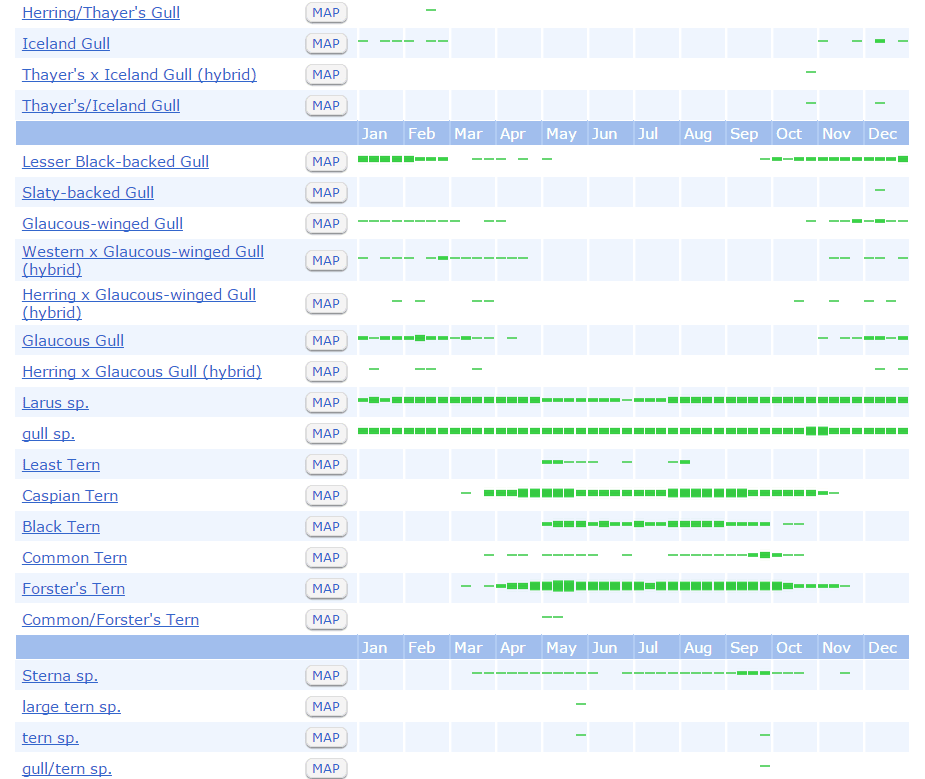 Okay so how do we take care of this.  Much like my suggestion to add the ability to toggle on or off invalid sightings on the maps page; there would be a simple filter on the bar charts or any page that has output data that would allow us to filter this other junk out. A quick redesign of the top of each table and it would be easier to read, and create a nice placement for a filter button. 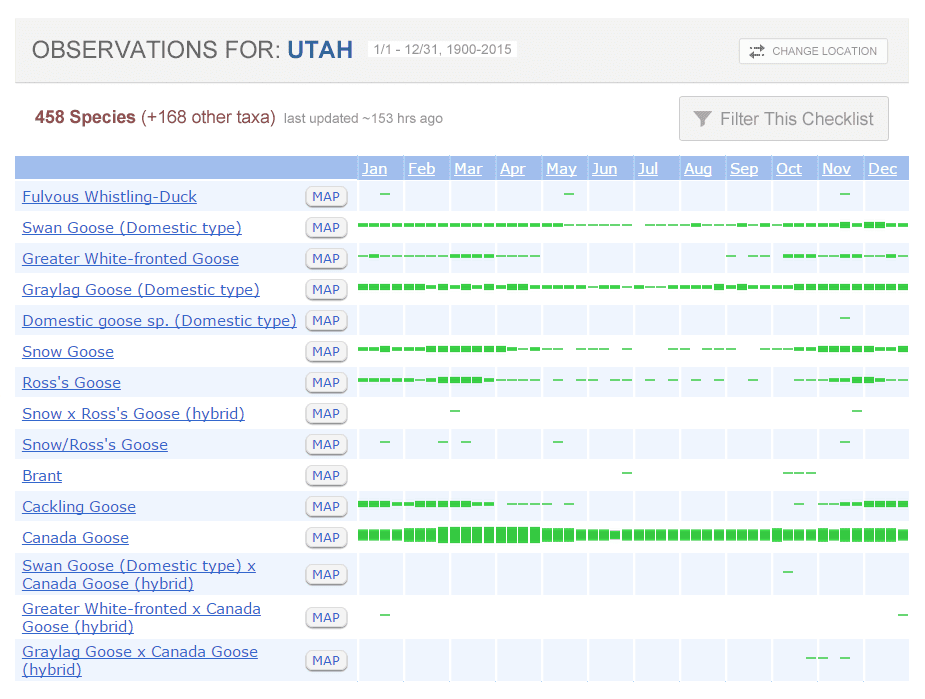 I already feel better jsut cleaning up the table header :)  So lets see what would happen when you click the "Filter This Checklist" button. 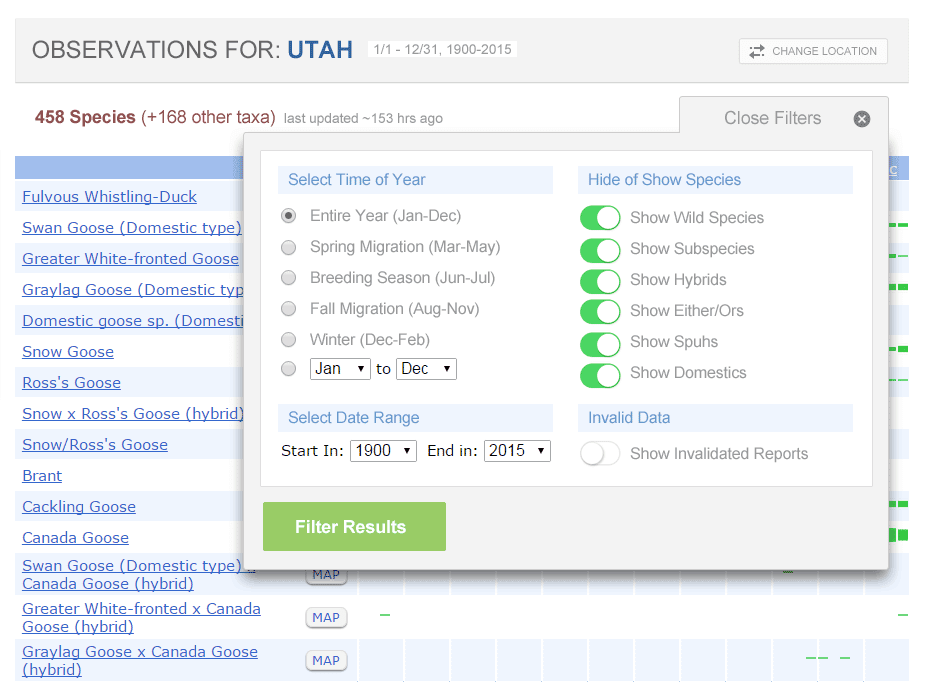 You would be able to filter by time of year, date, a number of toggles for what species types you want to see, and hell, lets even throw in the ability to show invalidated reports--this will eb my life long goal with eBird I think.  So if we were to go through and turn all the species filters off except for wild like so: 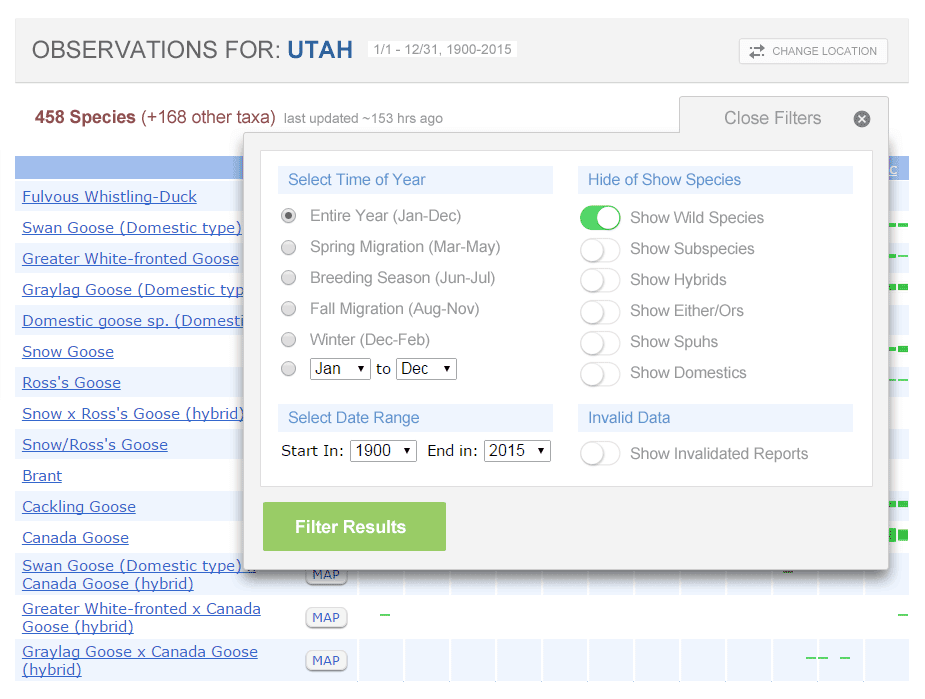 The output would change and we would see the following, removing all the spuhs, hybrids and such--giving us a real total for the wild species in Utah: 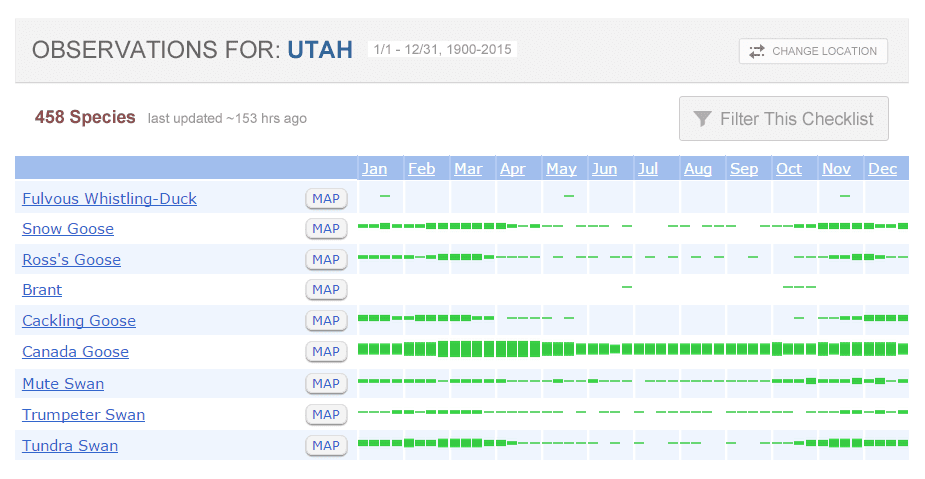 And of course just for laughs if we were to go in and adjust the toggle for invalid reports the screen would change ever so slightly to now show invalid species in a red (the abundance marker would be red as well), and next to the species total would list the invalid species as well, keeping thisngs clean. 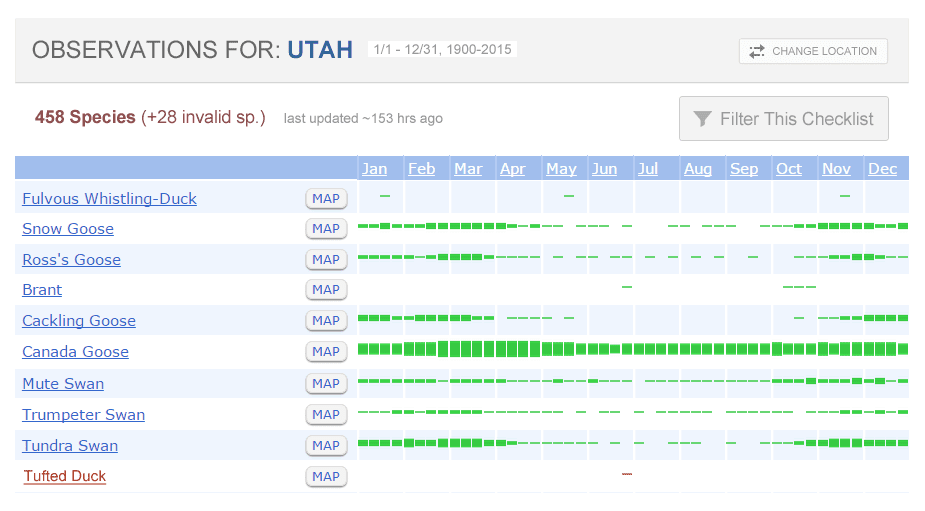 Maybe its just me, but this tool can be used in so many ways, and make eBird even better for its users.  I've seen some crazy stuff put on checklists in the past.  Park ducks and gees from an aviary. Emu and Ostrich from what are obviously farms.  Guineafowl on private property; a number of exotic ducks again on private property, or public ponds operated by private entitities.  I am a birder, and I really only have an interest in teh free flying wild stuff.  Don't get me wrong there are some free flying escapees--and I think that is a hole other classification of birds that we could add into the database--the ability to mark something as a free flying escapee on a checklist would add a new dyanamic.  Mandarin Ducks, Bar-headed Geese, Pochards, Budgies, etc. 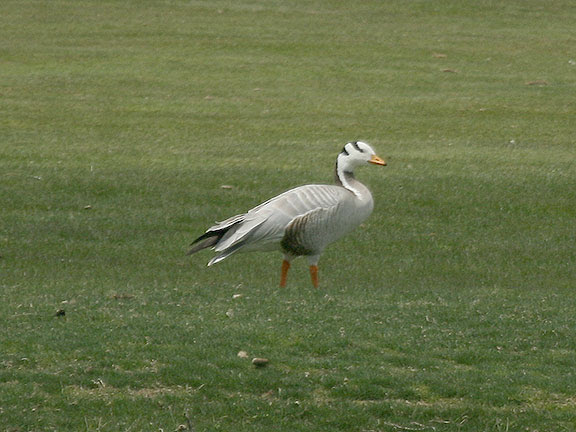 What I am getting at is I don't really care what they allow people to put into the system.  I get the importance of tracking domestics (to a certain extent); but that's not something I will ever do.  Adding more rich features to enhance the user experience of the data output will only make eBird more valuable to its users, researchers, and team eBird.

I am glad you had this report, I am on that puts on the domestics because they are listed so I thought it was important to ebird, but it is a pain and so I am happy to not add them, I was just trying to be honest when I put down that I listed all the species I saw. Believe me I will be happy if I don't have to bother counting them every time I go to Salem pond or to Spring lake :) Let me know if I am doing anything else wrong, I am still new to all of this and need all the guidance I can get, is it ok to add the photos

Suzi: You're not doing it wrong; the birds are on ther for a reason. YOU DON'T HAVE TO PUT THEM DOWN, but the option to is available. You also don't have to include every bird you see--you can mark it as not a complete checklist. This signifies you aren't reporting everything you saw for one reason or another.

eBird encourages users to add documentation--anything that is flagged when you report it should get some kind of documentation; whether written, photo, audio, or video its really helpful to reviewers to have this data. eBird has a great article to help you with embedding photos:

I like that you offer solutions to the items that trouble you. Well done. Hope eBird Team sees this.

A huge collection of all the Celebrity net worth of the world. How much is celebrity worth? Compare yourself to your favorite celebrity.