Status and Distribution of "Western" Flycatcher in Utah?

Sorry to get scientific with the post title--but this post will delve a little or a lot bit in to the realm of science--depending on how you want to look at things. I am not a scientist or a biologist, but on a daily basis I analyze data, and use that data to make predictions, hypotheses, and come up with solutions to problems.  Today I'm not solving a problem, but more or less looking at a problem and proposing some ideas.  These ideas came to fruition after a phone call with Rick Fridell about a number of reports in eBird of Pacific-slope Flycatcher.  Back in 2006 Rick and I found 2 empids at Red Hills Golf Course in January.  Both birds represented the first winter records of empids in southwestern Utah--and the only in eBird for Utah during the winter months.  Historical information about empids in Utah is quite lacking so there may be some from pre-2000, but the data just isn't there to look at.

One of the birds was rather straight forward and was a DUSKY FLYCATCHER.  The other bird was a bit more troubling as it was a "WESTERN" FLYCATCHER, so either a Cordilleran or a Pacific-slope Flycatcher.  At the time the general though was--it's winter, it's a Western-type Flycatcher, it's not calling, so it's best left to just "Western" Flycatcher species.  However, conventional wisdom at the time suggested that ONLY Pacific-slope Flycatchers over-wintered in the interior southwest, with a handful of reports annually in southern California and Arizona along the Colorado River. 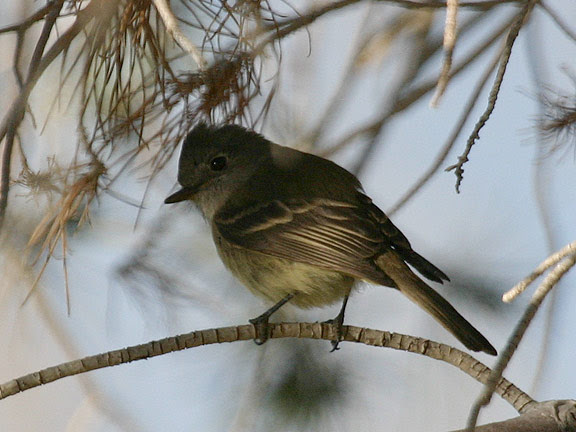 But I'll digress, at the time I left it as just a spuh and moved on.  Later that same week, Rick found another "Western" Flycatcher in Washington County, making it 3 empids in one week in winter.  Fast forward to this week and the phone call I had with Rick.  I am for the time being helping review sightings in Washington County on eBird--Rick will be taking over in the near future, but I was doing some cleanup and noticed he had submitted a handful of reports for PSFL. In all 11 reportfrom the spring and fall. This was unexpected for me; even more so was that one checklist from May 27, 2012 had 5 PSFL included on the report. Unprecedented in Utah.

If you don't know Rick, quite frankly he's probably the best birder in Utah hands down.  He's been responsible for numerous state first records, and finds great birds on an almost weekly basis down in Washington County.  So when Rick added these birds to his lists, he immediately had my attention.  Basically what Rick shared with me, was that birders in Arizona and Nevada birding at lowland habitats during migration were not finding Cordilleran Flycatchers, ONLY Pacific-slopes.  During the spring calling birds were identified by their audibles, and based off banding projects it was basically assumed that all Western's at these sites were actually PSFL's.  What?

This one really through me for a loop.  Although I was sure this species migrated through Utah, I thought that it was impossible to say for sure which species we were actually seeing during migration. De-facto I called everything in Utah a Cordilleran--even birds not calling.  Have we been doing this wrong for years? Is it only safe to identify on territory or calling Cordilleran Flycatchers? Were we actually seeing Pacific-slope as the majority of valley and lowland Western Flycatchers during migration?  Was this a Pacific-slope Flycatcher? 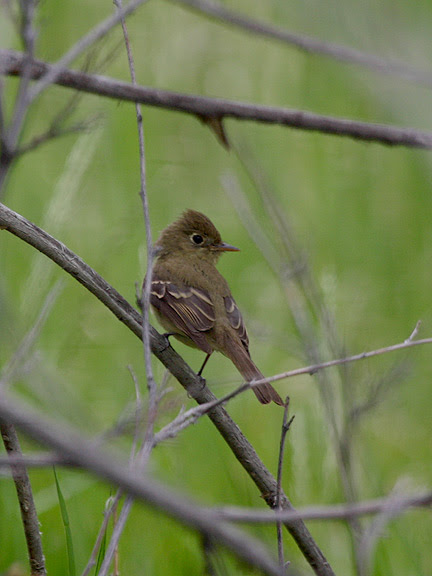 Migrant "Western" Flycatcher at Fontenelle, Wyoming in May 2005
Due to inland location and overall elevation it was ID'd as a Cordilleran.
However, Fontenelle, is a "lowland" trap by Wyoming standards.

The assumption that the lowland birds are all Pacific-slope seems to go hand in hand with the idea that Cordilleran Flycatchers migrate through the mountains and highlands to their wintering sites, predominately in the mountains and pacific slopes of south central Mexico.  Parallel ideas are that of birds like Cassin's Vireo, Townsend's, Nashville, and Hermit Warbler, and Rufous Hummingbird.  All  of these species are rare and some non-existant in spring in Utah.  Some do show up occasionally, but these are predominantly only fall migrants in Utah  None-the-less they are only found during migration--like the speculation of PSFL and its occurence here.

Hermit Warbler interestingly are rarely if almost never found away from high elevation sites with a coniferous component in the interior southwest during the fall.  While all the others tend to show up at various elevations and habitats.

So I've droned on--but lets actually look at some maps I generated via eBird and customized to show information about Cordilleran and Pacific-slope Flycatchers. 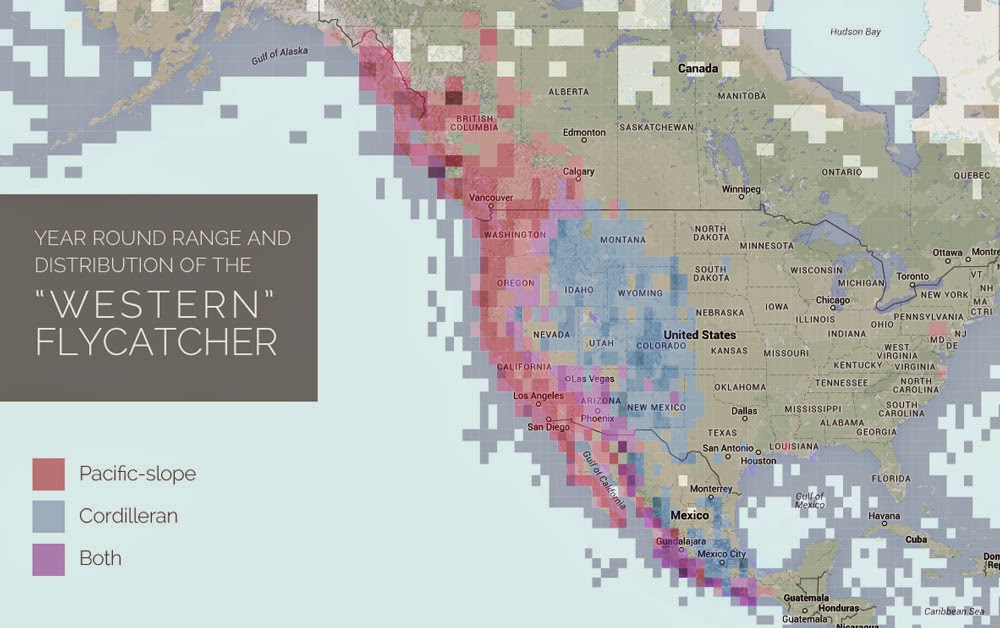 This first map shows the year round range (via actual detections in eBird) of both COFL and PSFL.  COFL is shown in blue; strictly in the mountain west through central Mexico.  PSFL is show in red from Alaska to southern Mexico on of all things the Pacific coast and slopes.  The purple blocks represent overlap where both species have been or are reported.  Much of this is migration and winter grounds.  Note the interior range of PSFL into Washington State and Canada almost directly north of Utah.

Do we assume these birds migrate "around" the Great Basin, following the Sierra Nevada slopes and the coast, north and south during migration, or is it more likely they shoot straight over one or both directions?  Looking at this map is seems almost impossible that this species misses Utah, and that in all likelihood a large number pass through at least during the fall; but presumably also during the spring. 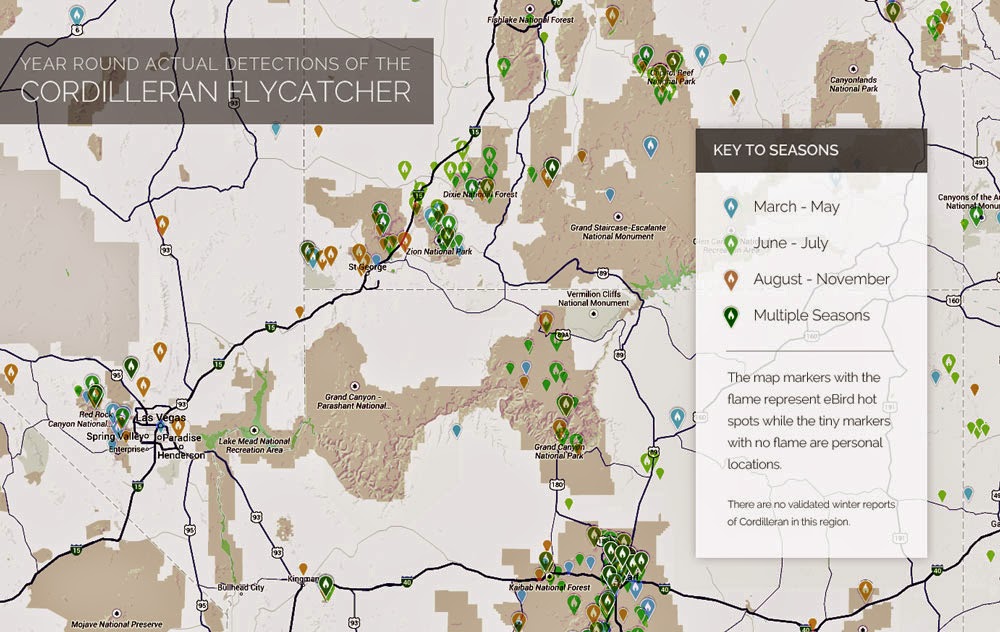 The map above shows year round Cordilleran Flycatcher reports from eBird specifically in southwest Utah. The light green spots represent breeding reports from what mostly appear to be high elevation sites as they should.  The blue and orange dots represent migrant reports  You'll notive that while there are numerous locations around the light green dots, there are alos some out in low laying areas; notably around Las Vegas and St. George.  The dark green spots represent overlap where birds have been reported at a minimum of at least spring and/or fall migration and the breeding season.  Again the majority of these dark dreesn show up at the high elevation sites.  ONe thing to note is that there are no winter records from this region.

Well what about Pacific-slope Flycatcher reports? Below shows the map of reports year round from the same region as above. Take a look... 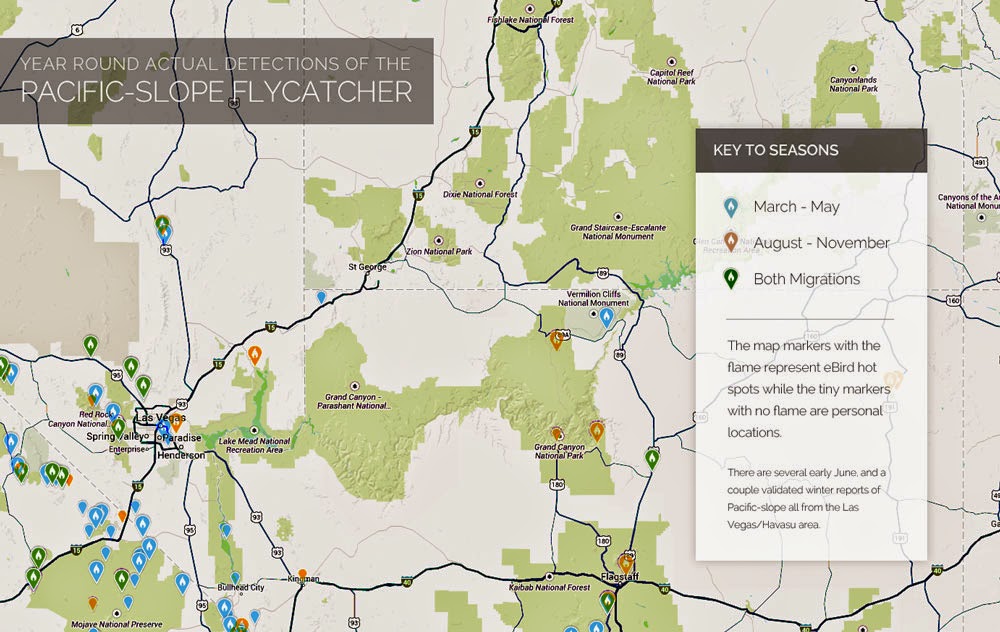 There are obvioulsy much fewer reports on this map; and that is expected. Afterall a large portion of the map is high elevation coniferous forest around Flagstaff, the North Rim of the Grand Canyon, and throughout southern Utah.  This is the breeding habitat of COFL.  Of note there are no breeding season reports from this area; there were several reports from the first week of June at lowland sites around Las Vegas which presumably are late northbound migrants.

The interesting thing about this map is the clear data points to the west, southwest, and south of Utah, basically everything around our fair state.  Yet in Utah; nada. There is something wrong with this picture, and had Rick not brought this to my attention, I don't know how long I would have gone before actually looking at these maps.  I think its a fair assumption that the lack of reports in Utah is not due to the fact that they don't occur here; but instead is due to the fact that physically they look the same as our Cordilleran Flycatchers.  How many Pacific Slope Flycatchers have been right underneath our noses? I pulled up the list of Cordilleran Flycatcher sightings just from Lytle Ranch.  Every record occurs in spring or fall migration and in all there are only 22 individual birds reported from 17 dates. That's actaully very slim numbers in comparison to let's say Dusky Flycatcher where there are over 50 indicvidaul reports.

The last figure I created below is of the winter reports of both species of "Western" Flycatcher.  In pink you can see PSFL, and in blue is COFL.  The purple dots along the Pacific slope in Mexico represent overlapping reports. 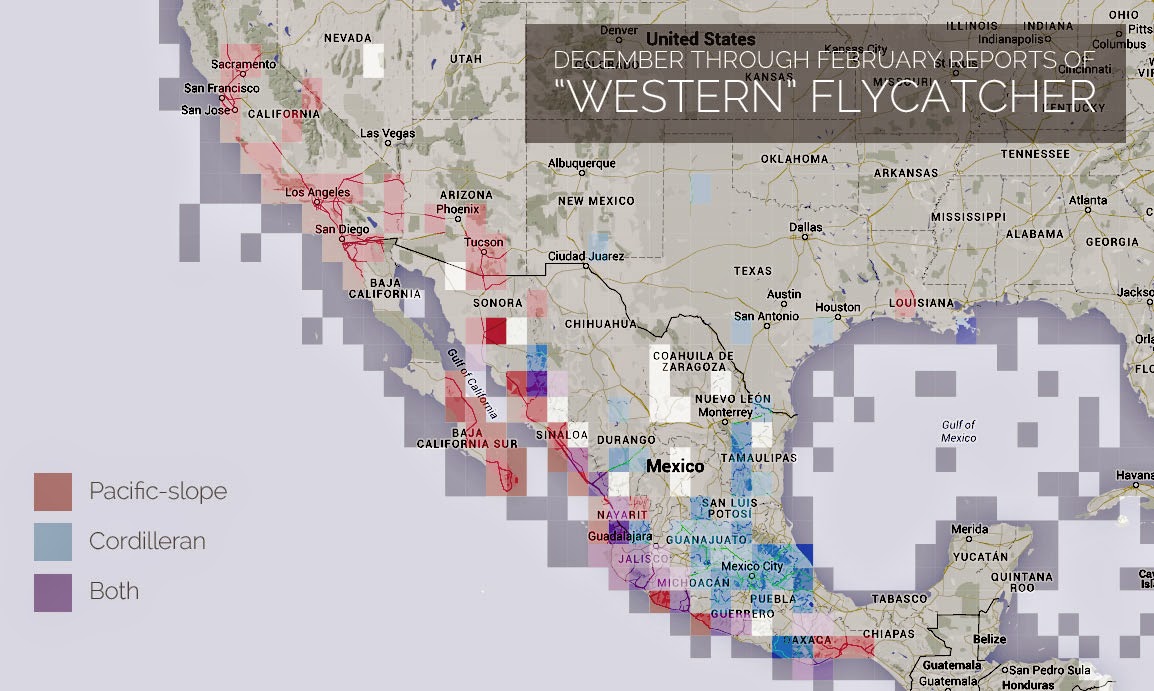 Aside from 4 or 5 wintter reports in America for COFL--all east of El Paso, Texas; all other reports in the lower 48 in winter are of PSFL.  Notably in the desert southwest in rizona, California and along the Colorado River.  So what does this mean?

I went into eBird and changed all my spring/fall lowland sightings in Washington county to Cordilleran/Pacific-slope Flycatcher. There are now 16 reports in queue to be reviewed for PSFL in Washingtong County during the spring or fall with an additiaonl 7 or 8 Pac-slope/Cordilleran already approved.  I used that nomenclature for the time being as it is safest.  However, where Rick has heard the vocalizations it can likely be said his birds were indeed PSFL.

But what is the true extnet of this species in Utah?  Does it extend beyond the reaches of Washington County?  Realistically how mnay Western Flycatchers submitted to eBird from lowland sites around the state were heard vocalizing? And what is the typical migration pattern for Cordilleran Flycatcher?  I for one will be taking more time to listen and make sure I know this vocaliztion this spring whne I hit the field:

I don't think you can really call it one way or another based on this information. Isn't "Western" Flycatcher Species the only safe way to call it? Every low land western could very well be a pacific, but without vocalizations most are probably unidentifiable.

Depends on how you look at the facts. If 99% of lowland reports of Westerns from Nevada and Arizona are Pac-slopes based of vocalizations, or general consensus among birders, I think its safe to assume the same at least about the birds in southwest Utah. Vocalizing is obviously the safest bet, but I think we can infer things based off this other infromation.

Do you know of any banding or research for this/these species in Utah?

@John: I don't know of any specific research. Banding though the only place I know of that does regular banding is the Rio Mesa Station on the Dolored River in southeast Utah. Bringing this up I totally forgot that they banded a couple PSFL in 2011 of which records were submitted and rejected by the UBRC. I don't know the reason for the rejection, but given the timing, and thoughts fromt his post, I think we can assume these birds were indeed PSFL.

Here is a recording I got this past weekend from Lytle Ranch of an apparent Pacific-slope Flycatcher: http://www.xeno-canto.org/246195.

It seems to audibly and visually match the call from a PSFL and not a COFL.

Here is a Western Flycatcher song I recorded this past weekend from Lytle Ranch that matches up with a Pacific-slope song: http://www.xeno-canto.org/269953