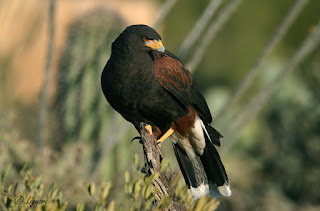 I was out one day talking birds with Tim Avery and Jeff Cooper, and the topic "telling the difference between birds that appear identical in plumage and shape" such as Sharp-shinned from Cooper's Hawks, and light Harlan's from other Red-tails, came up. I remember saying - telling similar species by their structure and the way they move is like telling a friend or family member from a distance by the way they walk or their figure. Then, Jeff Cooper said "I understand, I have identical twins and I can tell them apart." I remember thinking that is a perfect analogy...."they are identical Jeff, but you are so familiar with them you can tell them apart with ease.

Well, Sharp-shinned and Cooper's Hawks are very similar in appearance but not identical. The more observing you do, the easier difficult ID's become. I hope to see people out this fall watching hawks in the field, its the best (and really only) way to learn!!! Nothing looks like a Harris's Hawk (photo above, "click" to enlarge), I just like them.