When we decided to go to Africa we looked at a number of options for getting there.  None were too appealing.  It was either a 4 hour flight to Atlanta, with a layover and a 16 hour flight to Johannesburg.  Or a number of options involving flights to New York or Washington DC, followed by jumps to either Europe, the Middle East, or northwest Africa, and then onto Johannesburg.  What we decided upon was a red-eye to Paris direct form Salt Lake, followed by a couple days rest in Paris, and then another red-eye to Johannesburg.  The plus side is we wouldn’t lose any days to travel, meaning our time on the ground could be used to do everything we wanted. 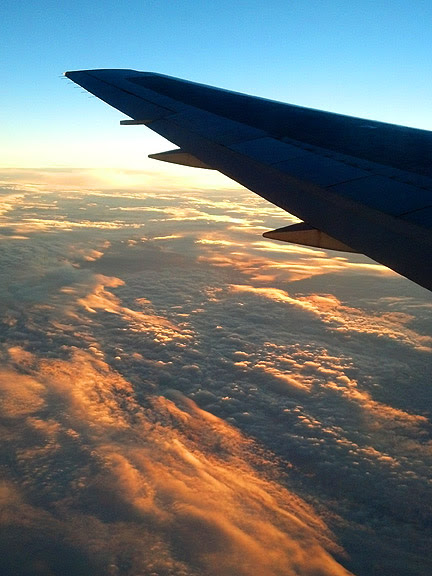 So let’s get right to the point, and start things off in France… 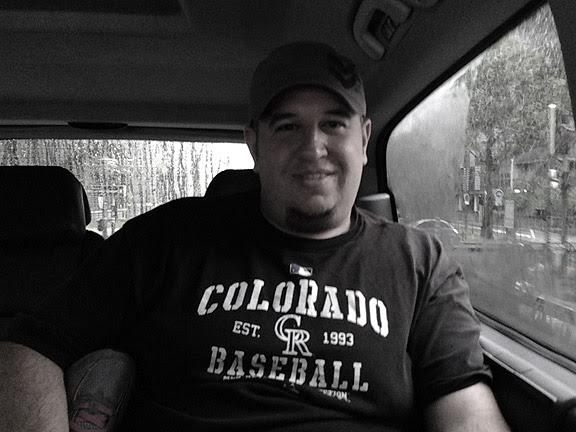 Just Arrived in Paris... and exhausted

10 hour flight from Salt Lake city and we’re on the ground and headed into downtown Paris in the midst of a downpour there were few birds.  The first of note was a ROOK flyover on the highway, followed by numerous CARRION CROWS--the most abundant species I saw in France, aside from what I am now calling the “common three”--European Starling, House Sparrow, and Rock Pigeon. 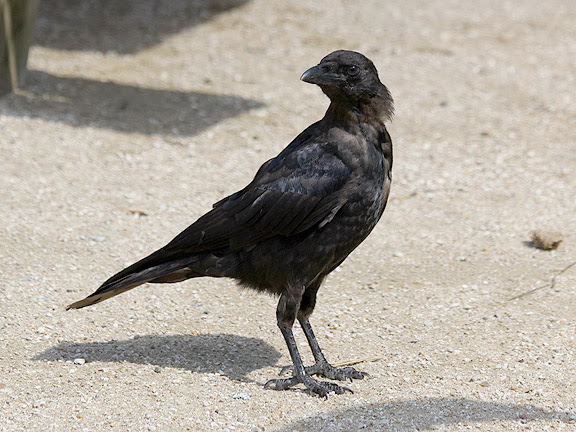 As we wove through the tiny streets, I couldn’t have told you where we were, until a block from our hotel, when I spied the Eiffel Tower between a couple buildings.  We checked in and went to our rooms for a much needed nap--but not before I glimpsed the pigeons across the alley from us--my lifer STOCK PIGEONS, and my favorite bird from France, the COMMON WOOD PIGEON. 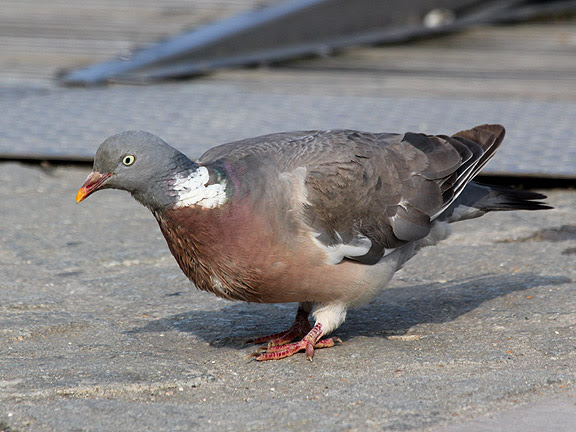 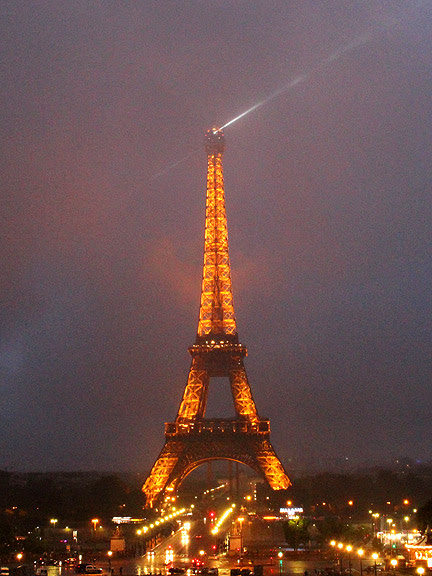 The Eiffel Tower in the clouds our first night in Paris.

To be blunt, the bird life in Paris sucked.  It was basically non-existent.  Aside from the common three and a handful of other common species there were few birds despite what seemed like ample habitat.  What few birds were present were easy to pick out. 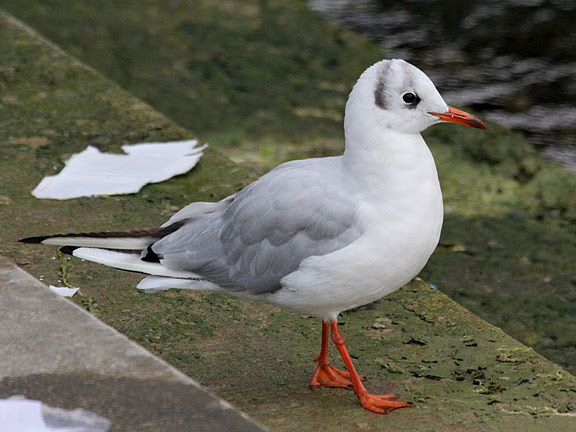 The BLACK-HEADED GULLS were a constant up and down the Seine River.  A EURASIAN HOBBY flyover was the only raptor seen, and a GREAT CORMORANT flyby was the only waterbird/diver seen. 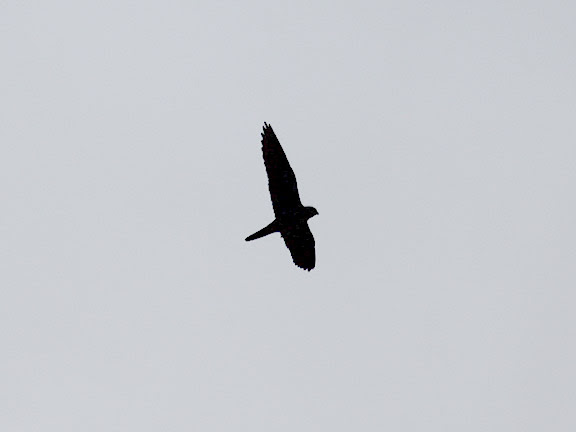 This flyover Eurasian Hobby at the Eiffel Tower was the only raptor I saw in France.

I did snag both EURASIAN COOT and EURASIAN MOORHEN--the coots were in the ponds beneath the Eiffel Tower, while the Moorhen was in a tiny 10’ long by 3’ wide water feature at the Jardin Des Plantes (Botanical Gardens).

On our second morning we took a short walk along the river to see the miniature Statue of Liberty, and added EURASIAN BLUE TIT and my first ever wagtail, in several GRAY WAGTAILS. 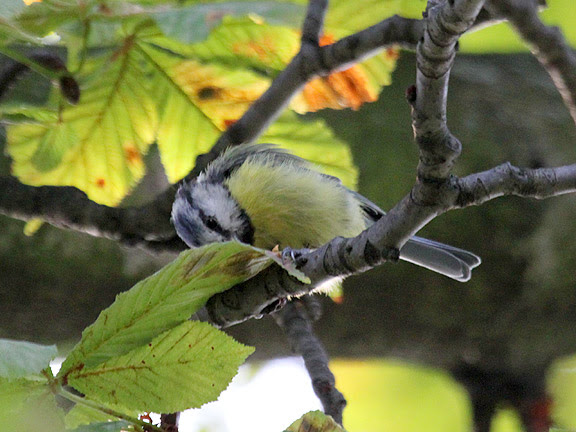 Eurasian Blue Tit were easy to find, sounding just like BC Chickadees. 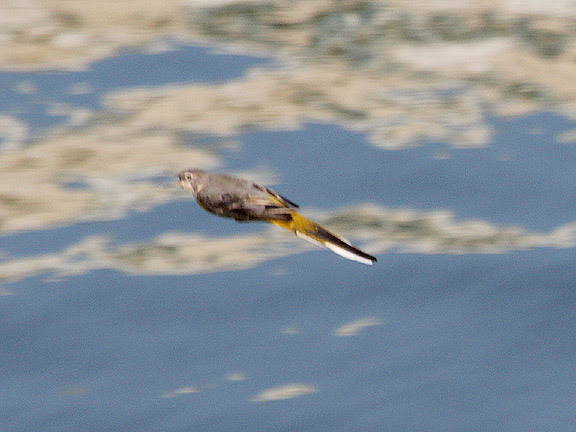 Gray Wagtails were super skittish along the Seine River.

We took the Batobus water taxi to the Jardin Des Plantes where I thought for sure the birding would be good--I was wrong.  One EURASIAN ROBIN, 3 EURASIAN BLACKBIRDS, a lone ROSE-RINGED PARAKEET, and several EURASIAN GOLDFINCHES were about it. 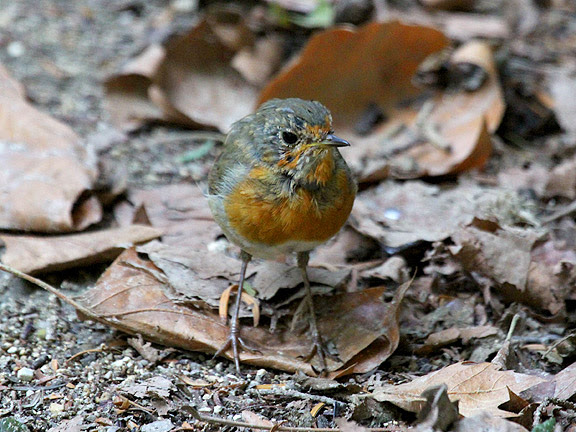 Eurasian Robin, looking rather ragged at the Jardin des Plantes. 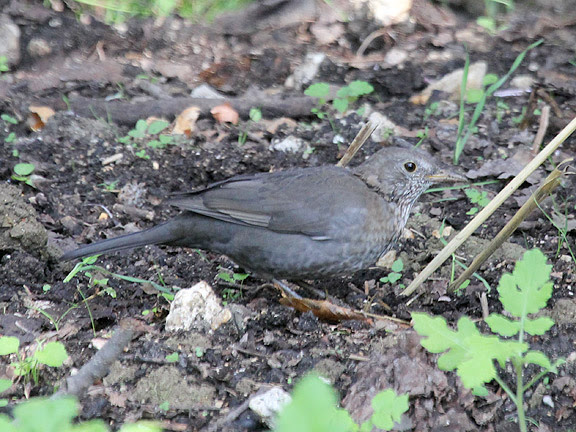 Eurasian Blackbird--is actually a thrush, and quite common at the Jardin des Plantes.

Over the 2 ½ days in Paris I saw just 18 species of life birds out of between 50-60 that were possible and listed as common.  It just isn’t a birders city I guess. 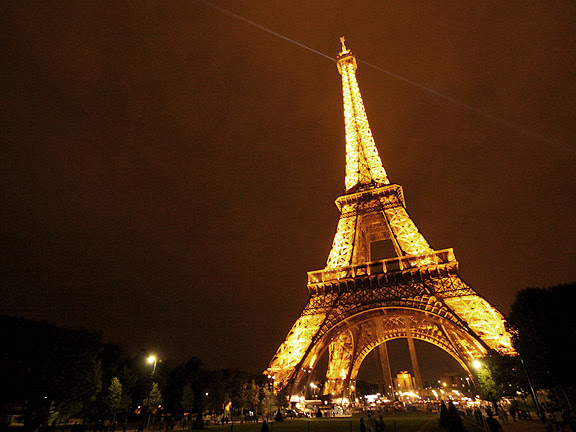 Paris is well worth a visit for the Eiffel Tower... 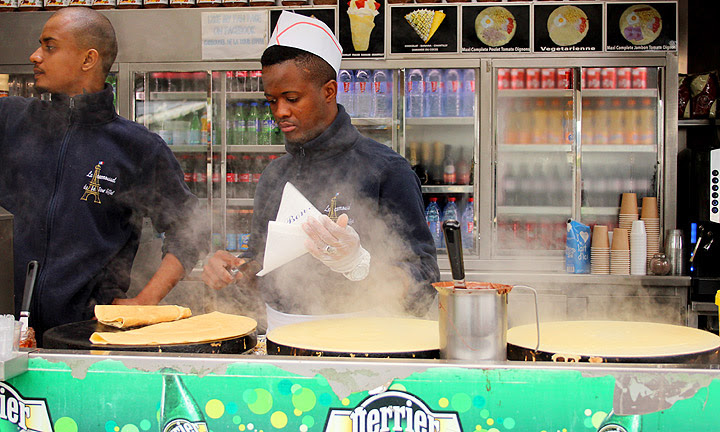 The best Crepes in the world (next to the Merry-Go-Rounds at the Eiffel Tower)... 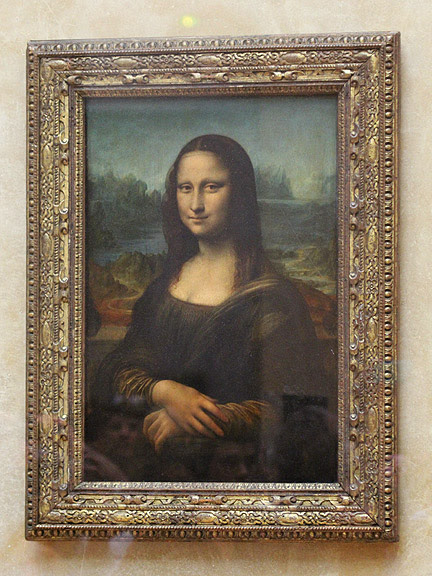 So you can say you've seen the Mona Lisa... 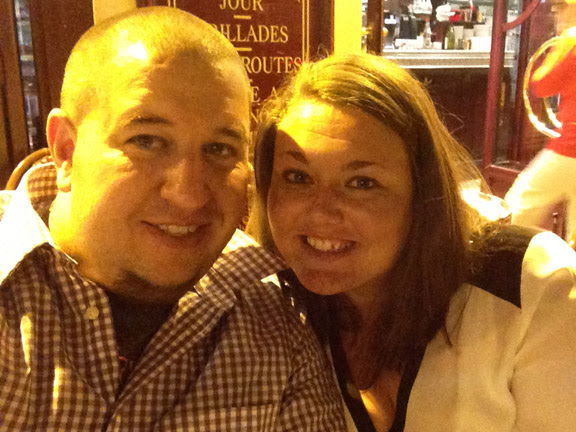 and to spend time in the "City of Love" with your love.

Leaving France was a bit of a nightmare.  The people at Air France in the Airport were to be blunt again, a-holes.  In general there seemed to be quite a bit of attitude from Parisians towards the obvious Americans we are--aside from a few very nice people we met. Once we finally made it off the ground ($140 more on top of what we already paid for our tickets, because Air France limits your carry on weight and we had to check an extra bag) the flight crew was awful, and the 9.5 hour flight couldn’t get over quickly enough.  I was glad to be done with France and onto something truly exciting--perhaps even life changing--AFRICA! 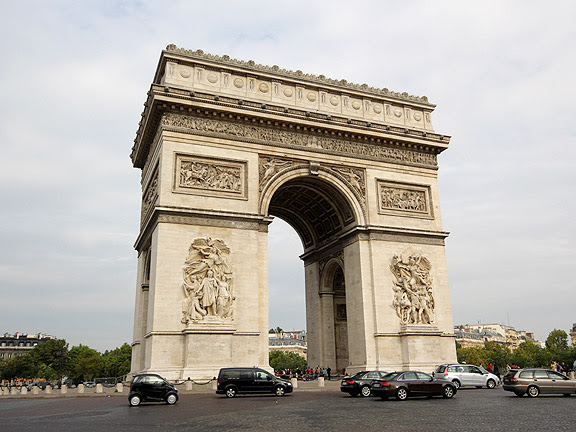 photos from birding in France can be viewed at:
Birding Paris, France on TimAveryBirding.com 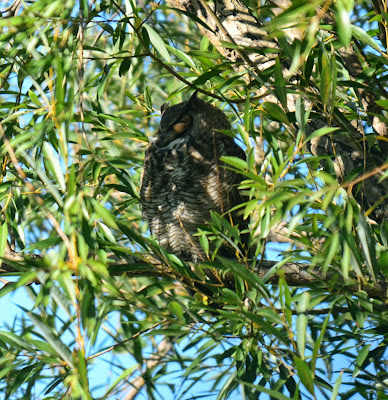 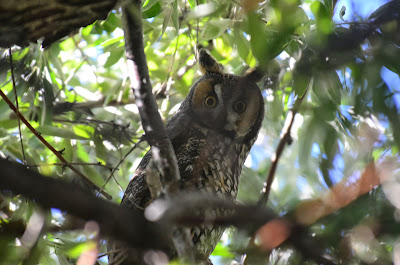 Season of the Hawks

Mid September means a lot of different things depending on who you ask. The leaves are changing, the days are getting shorter, there's a crispness in the evening air that says Autumn is arriving. But the one thing that makes it the most exciting is obvious. Pumpkin spice cappuccinos you're asking? No. Wrong blog for that. I'm talking about the activity that begs you to sit in the mountains all day with nothing but your binos and snacks (The Sommerfields bring at least 2 theater size Twizzlers packs so do yourself a favor and find out where they are). All you have to do is sit there with your eyes to the sky and wait for the action to come to you. I'm talking of course about Raptor migration. And this September has been as memorable as any for me.

I spent the weekend of 9/14-9/15 hawk watching with Jerry Liguori. If you've ever watched hawks with Jerry then you know it is an incredible learning experience. He takes expertise to a level I have never witnessed. His ability to pick out distant specks and not only know what they are but be able to very clearly explain why and what he sees, is second to none. On 9/15 we went to the Goshutes HawkWatch International location in Nevada. I had never been there before and what I saw amazed me. It was about a one hour hike from the parking lot - and not by any means an easy one - up to their camp. Field techs stay up here (with some coming and going) for the whole hawkwatch season - which I'm told extends into early November. During a typical day, they set traps out using live bait (pigeons, starlings, house sparrows) so that as the raptors migrate past they may strike at the "easy" prey. Then the techs, hidden in a nearby blind are able to release traps to catch the raptors when they are striking. The techs record data, band the birds, and release them back into the wild. It is an efficient operation and they go to great care to avoid trauma as much as possible and they clearly respect the birds and their position handling them. They are very welcoming to the public and wanted to make sure I had an enjoyable experience up there. The weather was a bit cloudy for much of the day but in spite of that we saw around 80 raptors which they say is a slow day. To me it was awesome. I took a lot of pictures, some of my favorites of which I've shared below. Amongst the highlights, we saw a pair of young Northern Goshawks chasing each other around, a close zip by of a Peregrine Falcon, a Prairie Falcon that was caught and banded, and a ton of Sharpies. The best part was just being in a place where hawks were moving with a bunch of good people to watch them with and learn from. I hope to get back up there this year (and in years to come) and highly recommend visiting to all who read this.

On 9/21, Jerry and I hosted a hawkwatch trip at Bountiful Peak. The wind was whipping and the conditions weren't great, but we saw a handful of birds with our group and everyone learned a lot and had a good time. I've also shared a couple of pictures from that trip below.