The day after Thanksgiving is a great time to get out and shop till you drop.  Spend lots of money, help boost companies end of year revenue, and stimulate the economy... It's also a nightmare to those of us who look at the whole things as the epitome of American gluttony--its sadly disgusting in many respects and speaks volumes about our society.  So this year we decided instead of joining other in our community partaking in this "Event", we would do a sort of anti-Black Friday--where instead of trying to trample our neighbors for that flat screen, we would go birding and be as far away from the commotion as possible.

As a disclaimer I will note that I did go to Home Depot and Shopko before making my way to the field trip--my haul: 2 four-mode headlamps and 4 strings of Christmas lights.  Hardly stuff worth fighting over, which is why I waited till the crowds dispersed.  In any event the trip began with 12 of us meeting up at the Wal-Mart on Foothill and Parley's Way--of all places we thought it a tad bit ironic, but also a bit clever. The group was quite varied and included several young Utah birders, including Kendall Watkins and Brenton Reyner, as well one of Utah's youngest and brightest birders, Ivan Richardson, 10, from St. George, along with his dad Tom. 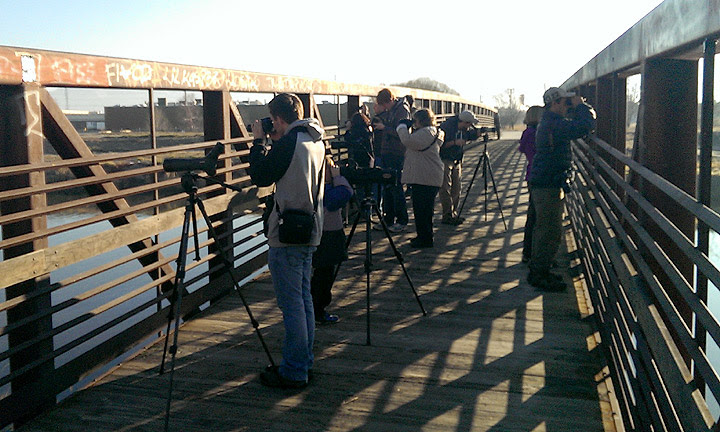 Utah Birders scanning the ducks at the Jordan River

To get started we headed to the Jordan River, Redwood Trailhead at about 2300 South.  Here the group got great looks at both species of Goldeneye, with an exceptional count of 25 BARROW'S GOLDENEYE.  Other waterfowl included, Bufflehead, Green-winged Teal, Mallard, Gadwall, Ruddy Duck, and Canada Goose.

From the river we hopped a short drive over to Decker Lake where we picked up a COMMON MERGANSER along with the usual California and Ring-billed Gulls, as well as plenty of Mallards and domestic Geese.  There were about 100 CANADA GEESE on the grass near the parking area, including the hybrid Canada X Grayleg that has been around at least the past 2 winters.  As we were getting ready to leave geese started pouring in, and as we watched them we picked out a couple CACKLING GEESE in the air.  We waited till the landed and found 2--while we were watching them 3 more came in for a count of 5 CACKLING GEESE. 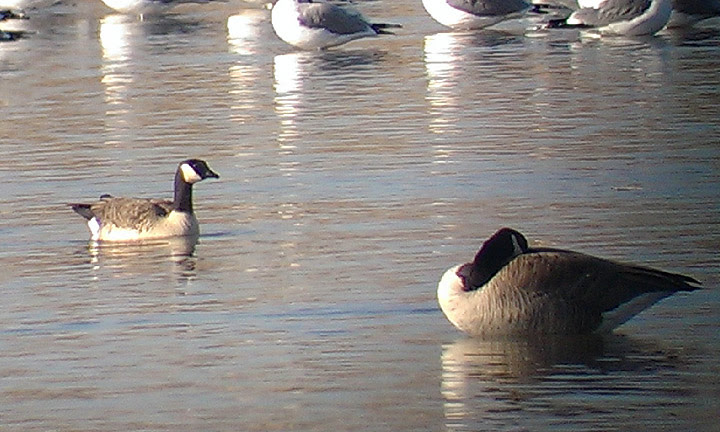 After getting our fill of these geese it was onward to Lake Park in hope of more geese, perhaps some gulls, and maybe, just maybe the Pacific Loon that had been present the week before.  Well there were few geese (by Lake Park standards), almost no gulls, and the loon I would say its safe to assume is gone.  We did however pick up a pair of HOODED MERGANSERS on the river behind the IHC building.  They were accompanied by a handful of Common Mergansers.  We also watched a PRAIRIE FALCON hunting in a large field to the west of there, providing great looks for the group. 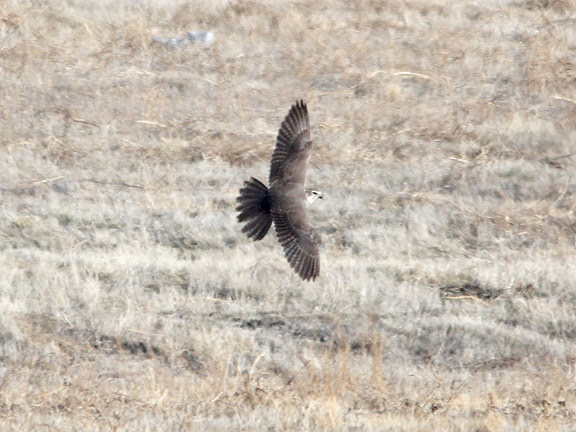 Prairie Falcon coming in for a landing at Lake Park

At the west pond we did add a lone RED-BREASTED MERGANSER for the 3 species sweep for the day.  The only other thing of note was an enormous flock of EUROPEAN STARLINGS, perhaps 5,000 birds that came form the west and flew over us, murmurating, as they headed east. 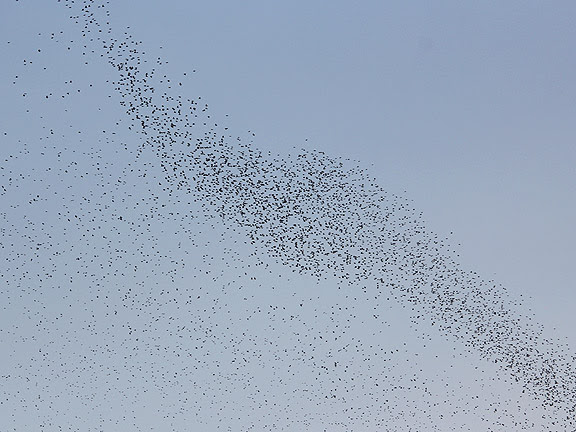 Just a portion of the European Starling flock over Lake Park

The next stop was Lee Kay Pond which was inundated with Gulls, approximately 2,500~ mostly on the west pond--the best viewing was from the east, but it put us at an extreme distance.  From the entrance to the middle pond we scoped the birds and picked out a couple HERRING and THAYER'S GULLS form a distance.  The Thayer's was a lifer for Ivan so that was quite exciting. 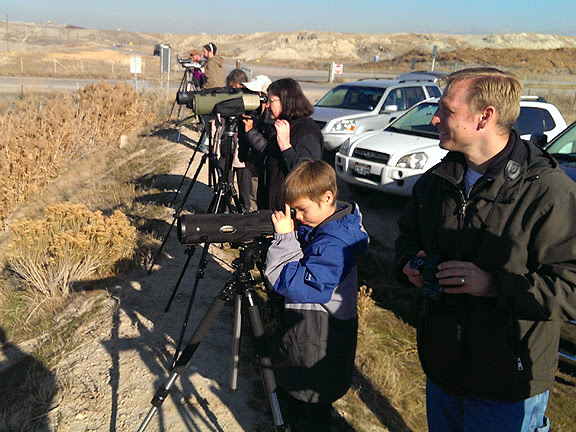 After giving it a good while we drove the road along the middle pond where we spotted more HOODED MERGANSERS.  We looped back to the west pond, closer to the flock to try scanning a little closer while we still had some good light.  We weren't out of the car 5 minutes when Kenny shouted that he had an ICELAND GULL.  I took a quick look through his scope and excitedly hollered for everyone to come over.  That's when we went into crisis mode--no one could get the bird in a scope, besides Kenny's and trying to get everyone on the bird was like a nightmare.  Finally, as a stroke of luck would have it the bird emerged form the throngs of gulls and sat in the open for everyone to see nicely--a life for many on the trip, including Ivan who had now picked up one of Utah's hardest to get gull species. 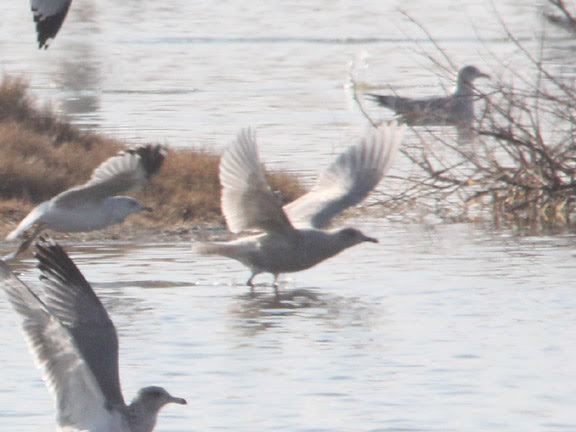 Iceland Gull taking flight--the highlight of the day and lifer for many.

Eventually a THAYER'S GULL flew right over us proving excellent looks for the entire group.  This was followed by the Iceland Gull taking off and flying to the west beach where it landed and began preening.  We drove down and spent a few more minutes watching it before continuing on our way. 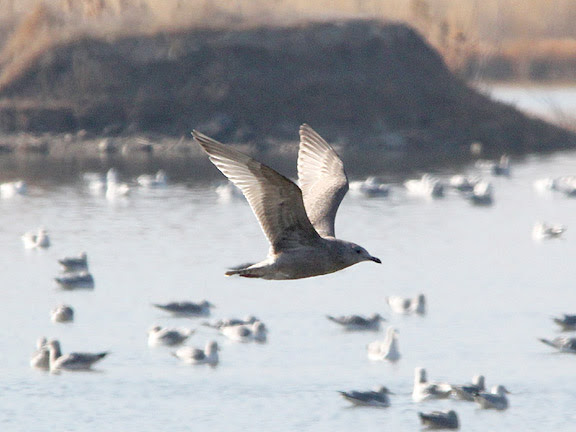 After our short break we drove the frontage road along I-80 towards Saltair.  Our stop here was at Kennecott's Inland Sea Shorebird Reserve--a private mitigation wetland that provides much needed protection to both habitat and birds on the south shore of the Great Salt Lake. The target bird here was Tundra Swan (among others), which this time of year can number in the thousands.  As our luck would have it there were about 1,000 TUNDRA SWANS present, and we spent the better part of an hour watching them from various distances, with different lighting and back drops.  It was a highlight for many on the trip. 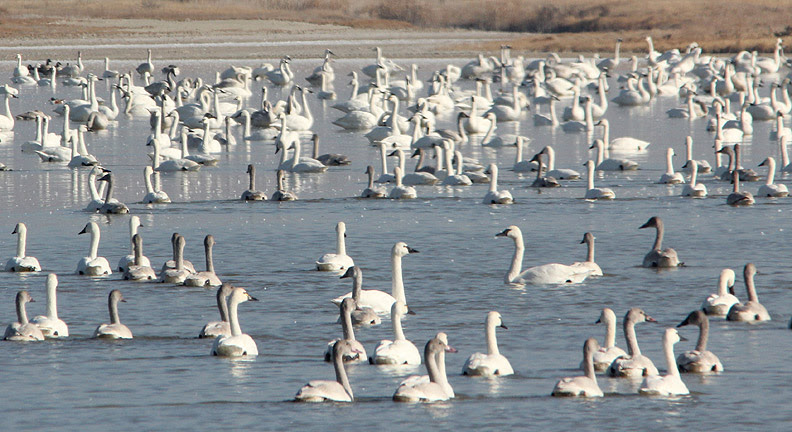 Small portion of the Tundra Swans at the ISSR

We also added both GOLDEN and BALD EAGLE and had NORTHERN HARRIER and several ROUGH-LEGGED HAWKS.  No shrikes, but several in the group did get short looks at a small flock of AMERICAN TREE SPARROWS that passed by the vehicles.

Our final stop of the trip was at the Great Salt Lake State Park marina to scan the gulls along the shoreline.  We hoped the Heermann's Gull from the previous week was still present but with great lighting we quickly found that it was not.  We spent some time just relaxing and talking while scanning, bring the trip to a quiet end.

We did however have one more sighting of note, as we made our way back to the Wal-Mart we passed Parley's Gulch where form the interstate were able to pick out 2 LEWIS'S WOODPECKERS remaining on the poles along the bike path.  A great end to a great trip.

Thanks to everyone who took part and made for a great day of birding some of the lesser visited places in the county--the south shore is often overlooked as a a birding hot spot but it definitely is one of the best places along the lake to look for waterbirds.