On December 27, 2004 I was one of the lucky few who were able to see a Red-headed Woodpecker at Wilson's Peach and Pecan Orchard in Hurricane, Utah.  The bird was found by Merrill Webb and although I was on my way back to Salt Lake and almost to Cedar City, I returned to Hurricane for this once in a birders lifetime rarity in Utah--or so I thought.

I saw the bird and a number of others did over the following weeks.  Fast forward almost 10 years and jump 5 miles to the east at another Pecan orchard and lo and behold what shows up but another Red-headed Woodpecker, this time found by Rick Fridell.  I didn't think I would make it down to see this bird, but no biggie since I'd seen the one 10 years ago.  But last week I was able to make it down and saw the bird--my 2nd Utah Red-headed Woodpecker.

As you can see, I only captured the finest images possible of RHWO here in Utah... Okay that might be a little bit of an exaggeration... Or just a lie. These photos sucked, but I wasn't after award winning shots--just documentation!

So what are the odds that this species would show up again, in such close proximity to where one showed up 10 years ago?  The birds were definitely different--the 1st one was an adult, and this years bird was a juvenile.  Let's think of southern Utah as a haystack.  There are likely dozens of pecan orchards around the Southwest part of the state, and plenty of other fruit trees as well.  The southwest is plentiful in both these respects, so if we were to include Arizona, Nevada, and Southern California the number of orchards would explode and the haystack would be enormous. 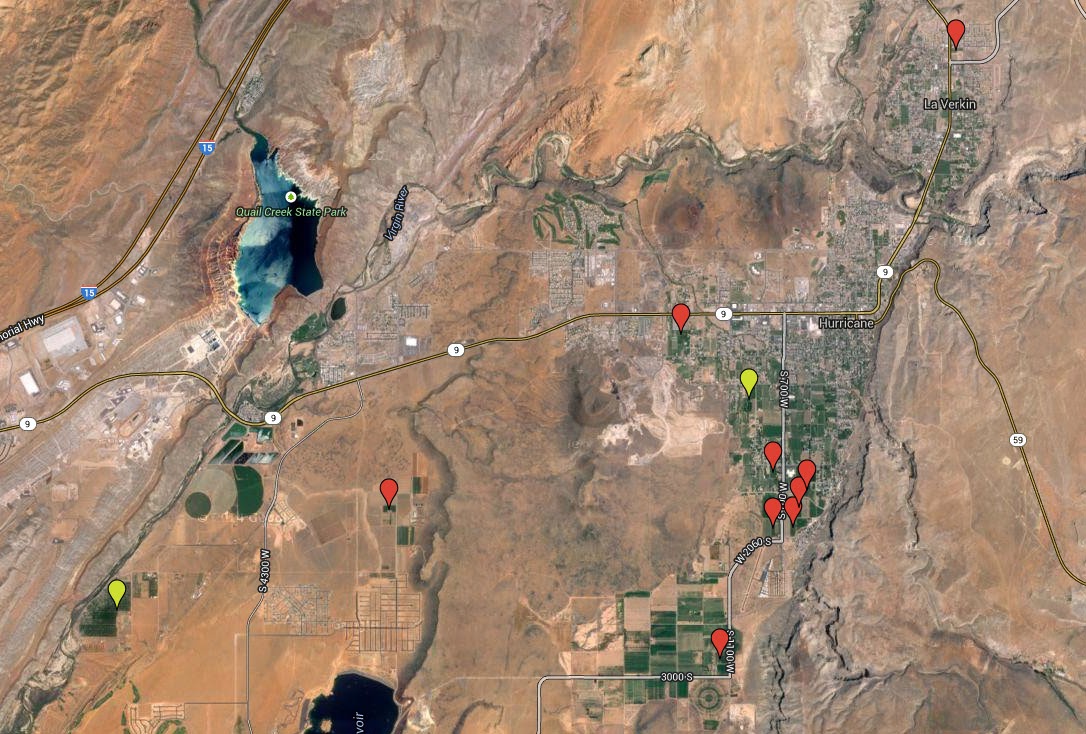 Google Map of the current Orchards in Hurricane and La Verkin. There are actually way more nut trees in what used to be orchards but are now neighborhoods. The green dots represent the 2 locations of the RHWO sightings in the area.

As per eBird including the 2 Utah sightings, there are 8 previous reports of Red-headed Woodpecker int he desert southwest.  The number of actual historical sightings is likely higher, but for brevity lets use eBird for our sample. 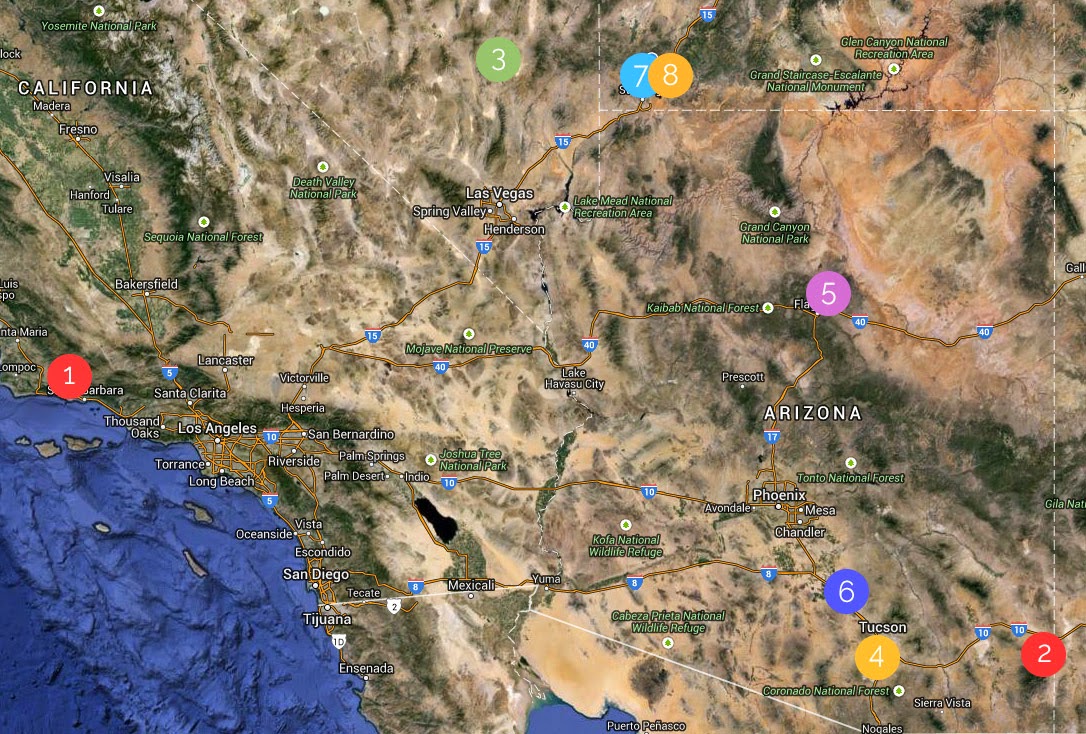 All records are from the winter, and they are:


There are also 5 outlying records from western Colorado and New Mexico:

East of these area the species has more outlying records, but becomes more common along the Rio Grande in New Mexico, and on the front range in Colorado. 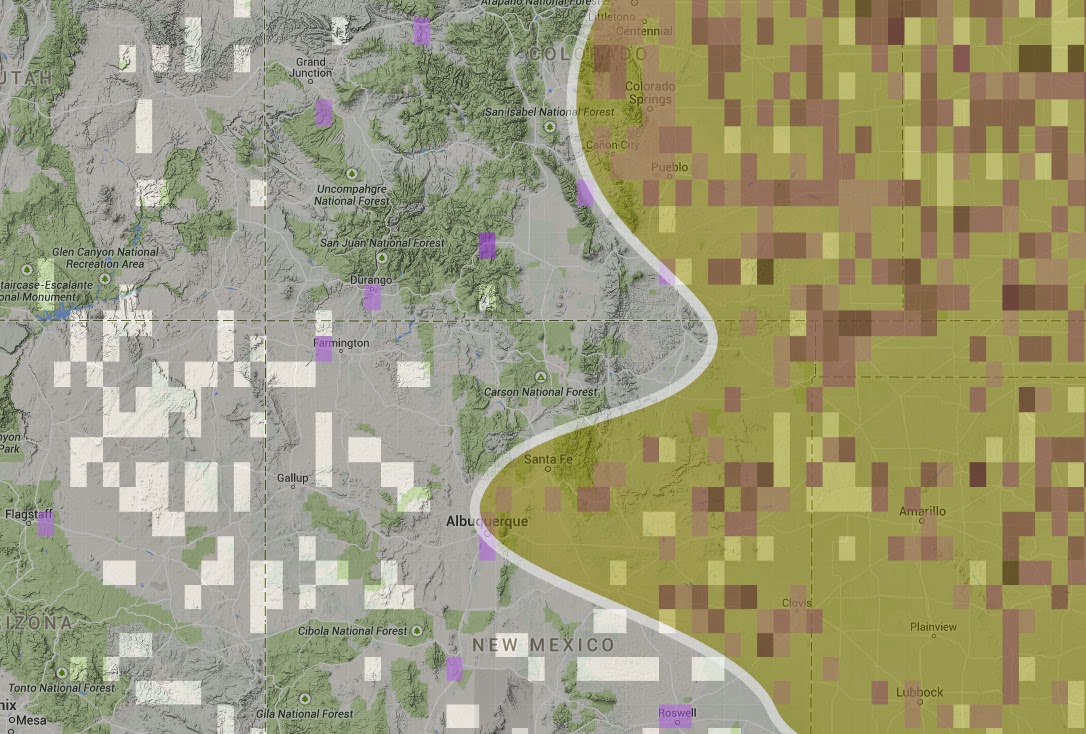 The yellow shows the extant of "typical range, with the white border represeneting the limit. on the west in Colorado and New Mexico.

All together told there are just 13 reports in 30 years in the southwest.  The proverbial haystack.

Of the 13 records there are 2 from the same location in Colorado 30 years apart.  I'm not sure if this is the "exact" same location or a general area, so where the birds were seen could actually be a wider berth than the hot spot on eBird.  But none-the-less its still pretty impressive.  The only other location with 2 reports form the "Same" location is the 2 birds from Hurricane, Utah.  In Utah the exact distance was 5.9 miles from one orchard to the other, across rather barren desert.

There are 2 ways of looking at this. 1 is that its sheer coincidence that both birds were found at pecan orchards 5 miles apart. The other is to say its not a coincidence but the habitat is very specific and for a vagrant to show up at such a location is such proximity to another is a pattern.  No matter how you look at it, its still a needle in a haystack.  And with only 2 variables for a sample size there is no way we can realistically look at it as a pattern.  We can assert that Pecan Groves provide an ideal wintering ground for this species, based off the Utah reports and the one from Arizona.  I would wonder if some of these other locations also had pecan trees or were nearby pecan or nut orchards.

Red-headed Woodpeckers mostly eat nuts such as acorns, beech nuts, and pecans during the winter months, caching food for later use. So the attraction to nut orchards has some legitimacy.We also know that this species is migratory and winters across the southern United States. So it is most likely to show up in the winter months at a nut orchard in the southwest.  As per the previous reports 8 of the 13 are from winter months, and 7 of these were from the extreme south and west of the reports.  4 summer reports from western Colorado could be remnants of historical breeding sites, or even extralimital "non-breeding breeding" individuals.

The overall lack of sightings in the desert southwest shows that this species is essentially a vagrant to the area.  With its penchant for nuts, if it does show up an orchard is the ideal location to find one.  But the odds of it being the same location or a nearby location have to be astronomical.

You meant yellow dots I think?

The dots look green to me. And who cares what a great overview of the rareness of this bird in the west!