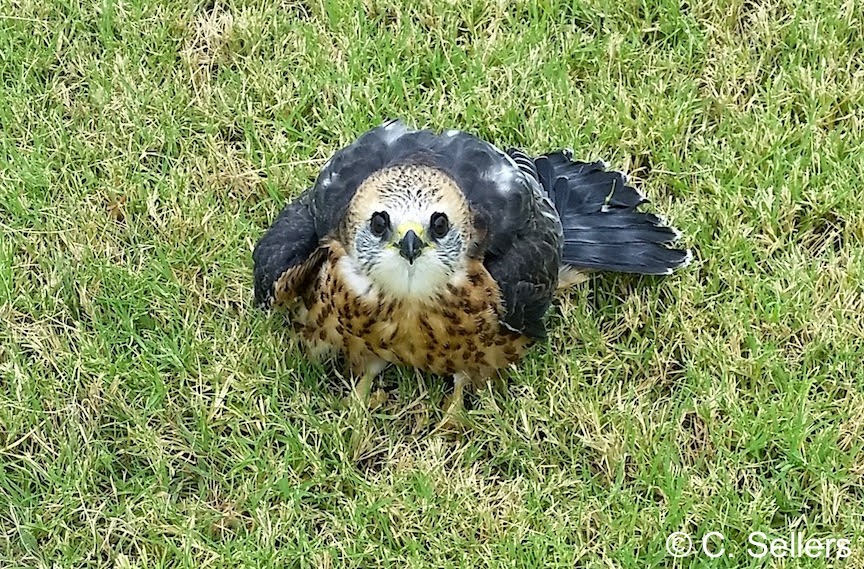 Migration... Before, During, & After the Storm

Last night afforded a great look at how weather effects nocturnal migration.  In the evening a storm front was approaching the Wasatch Front over the West Desert and Great Salt Lake.

At 8:57pm  the storm band stretches across the south end of the lake and out over the West Desert. There is a thin line of apparent migrants over the Wasatch already.  I have always assumed these were large flocks of sparrows lifting off at dusk this time of year. 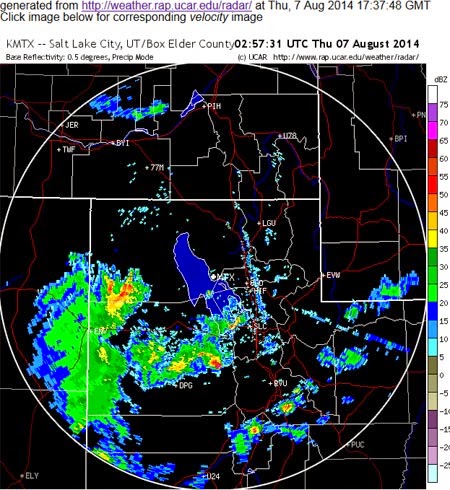 The second frame is at 9:55pm and the storm front has pressed up over the lake and to the edge of Salt Lake Valley.  Migration over the mountains has picked up with some areas approaching 25-30dBz. IF you look at the south end of the storm there don't appear to be any migrants, and on the north end, migration is sparse. 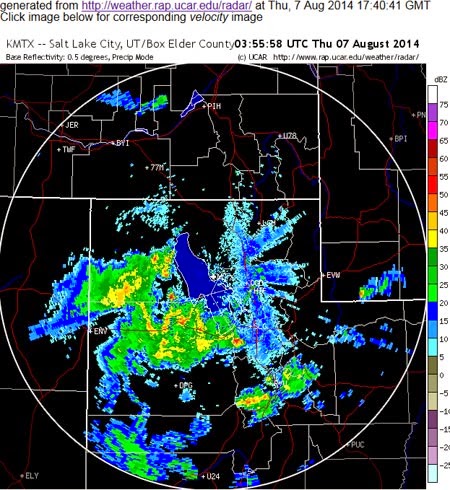 At 10:58pm the storm was directly over the lake, valleys, and heading into the mountains.  Migration at this point appears to have been broken up pretty good by the storm. The northeast edge shows a good migration underway, and migrants still along the front edge of the storm. The south, west, and north edges appear to be pretty dead. 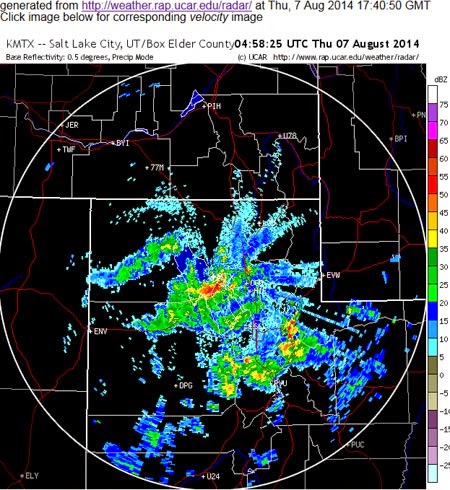 At 11:56pm the storm is directly over the valleys and mountains and appears to be breaking apart. Migrations is still happening in the areas where the storm isn't hitting, but its very light.  To the north and the south there is still no real movement, but to the west a large wave of migration appears to have started out over the West Desert. 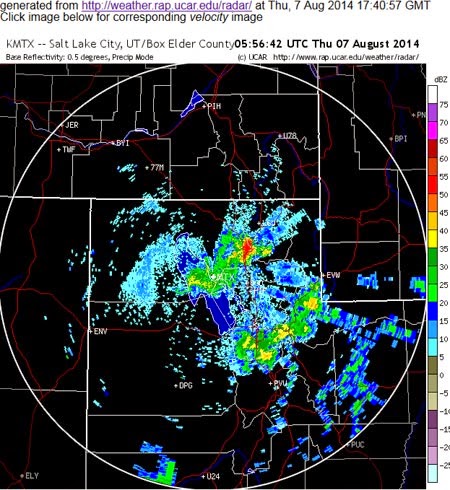 One hour later at 12:59am the storm is over the mountains and moving towards Wyoming.  Clear skies to the west are favorable and the migrants have taken to the sky over the Great Salt Lake Again.  It's still fairly light at this point... 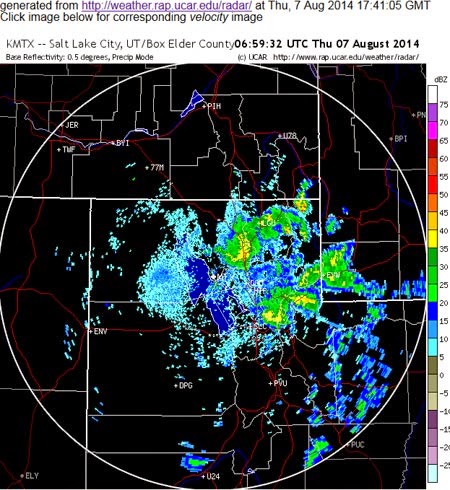 By 2:00am the storm is clear of the Wasatch Front, Valley,s and Lake and from here we can watch migration start to pick up over the next 4 hours before trailing off around 7:00am this morning.  This is fairly typical of storms fronts this time of year with migrants taking advantage of good conditions, and tail winds ahead of and following storms.  Below is a complete animation from 9:00pm last night to 7:00am this morning.

Tomorrow morning when you wake up, go outside for a moment and listen. All quiet on the songbird front. The first week of August is when I usually notice there are no more birds singing. This week I've stood on my deck each morning at dawn and just listened to the quiet. The past 2 days I didn't hear a single bird--singing or calling. This morning while I stood and listened a Black-capped Chickadee sang out. A couple Lesser Goldfinches flew over calling, and a House Finch called form a neighbors yard. My dog scared up an American Robin which let out its alarm call. All this in less than a minute, and then nothing--silence again.

Despite that big piece of the avian world that goes silent for the next 6 months, there is still so much to look forward to--and there are still sounds worth learning and listening. The next 6 weeks are particularly good for listening for Night Migrants and the unique calls birds make while flying during migration. Utah has never been great for listening for night flight calls, but occasionally a decent night produces some good numbers of calling birds--the hardest part is picking a location that is both accessible and in a good flight path.  Here is what migration looked like over northern Utah last night around midnight. 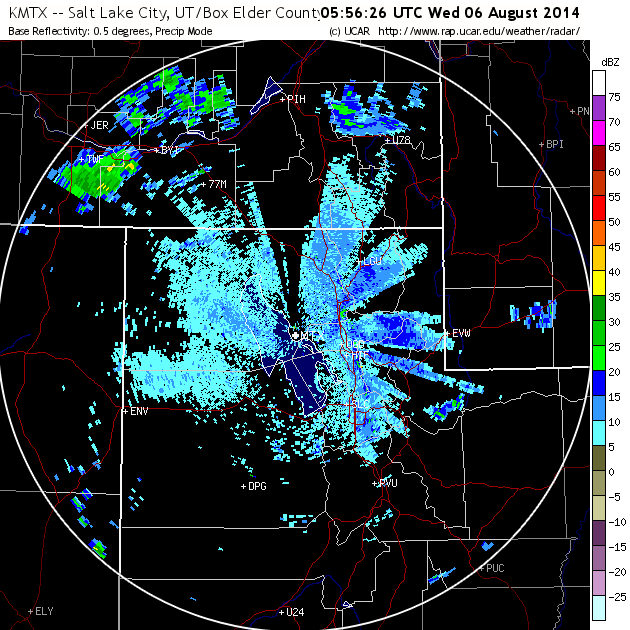 The green stuff up to is the tail of that storm that passed through--but the blue stuff over the Wasatch and west desert are birds heading south-southeast. You can see the velocity and directon on this image. 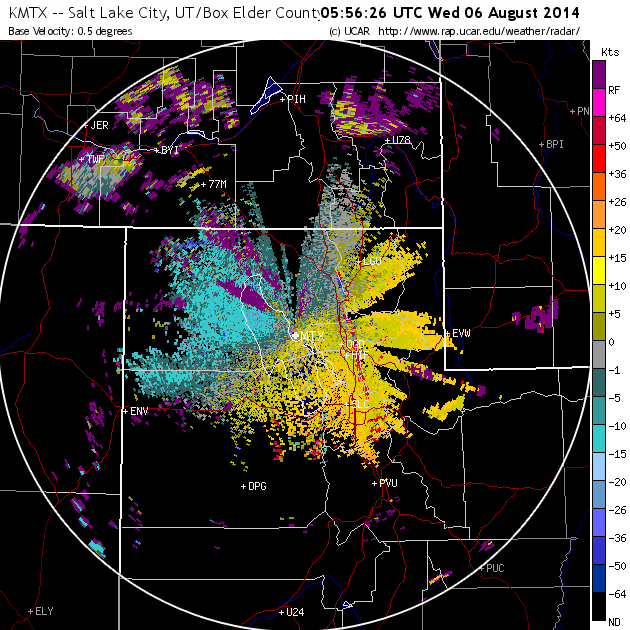 You can check out these radar images on http://weather.rap.ucar.edu/radar/ -- everything is in UTC so remember we are 6 hours behind (so 0600 UTC is actually midnight here). If you need a refresher on night migration and reading radar, check out these posts...

If this interests you at all I suggest finding a nice perch in the foothills, along the Wasatch Front, somewhere between 6-7,500' and hanging out for a couple hours after dark. Lay on your back facing up with your ears cupped--you never know what you might here. Sometimes it's things you recognize


The Killdeer flying overhead is a common sound that even new night flight listeners will hear from time to time. Things only get harder from here. Out here in the west one of the most common early migrants that you might hear is the Chipping Sparrow. All the spizella species have similar flight calls but Chipping is one you tend to hear a lot because there are lots of Chipping Sparrows.


Then comes one of the coolest things about night flight calls in my opinion--some species calls are so unique and undeniably tied to a species that a very rare migrant could be heard during a night flight, and identified without ever seeing the bird. Black-billed Cuckoo for instance have a call that any night flight listener who heard it, would start jumping for joy--no matter where you live.


And lastly Dickcissel is a species that migrates through Utah likely with some regularity--but is rarely observed here--but if you were to hear the "squirrrtt" call while out listening for night migrants you would be pretty sure about what you were hearing.


Take a few hours one night in the next couple weeks and go listen for night migrants. You might not hear a lot, but it will be a new birding experience worth giving a try.